[German]The European Commission  has announced a legislative proposal by September 23, 2021 to tackle the problem of e-waste caused by different charging interfaces on electronic devices. The move seems necessary after the industry worked for years on a voluntary approach but could only reduce the number of charging interfaces from 30 to 3 variants. The unified charging interface is likely to come.

The following tweet from the EU Commission addresses the problem and the planned approach. Chargers for electronic devices are lying around in drawers everywhere because the industry could not agree on a common interface. This causes tons of electronic waste because chargers from discarded devices still work but are no longer usable because of incompatible plugs. 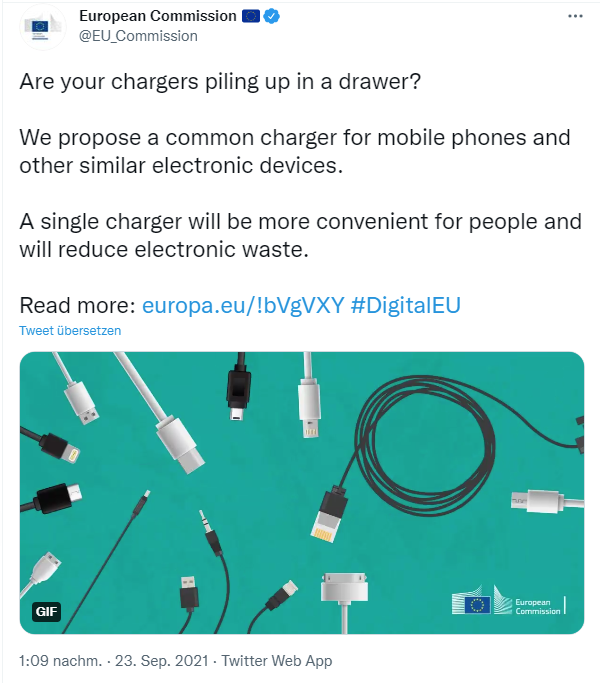 According to the EU Commission, around 420 million cell phones and other portable electronic devices were sold in the EU in 2020. On average, consumers own about three cell phone chargers, two of which they use regularly. Yet, 38% of consumers reported having experienced problems at least once because they could not charge their cell phone because the available chargers were not compatible. The situation is not only annoying for consumers, but also costly, as they spend around EUR 2.4 billion annually on separate chargers that do not come with electronic devices. In addition, disposed and unused chargers are estimated to generate up to 11,000 tons of electronic waste annually.

The industry has failed

Searching my German blog for charging interface, I come across several posts from 2013/2014, where EU initiatives to finally come to a uniform charging interface for electronic devices in order to limit the amount of e-waste in this area has been addressed. But the approach to let the industry create a unique standard, failed miserably. The EU Commission now draws a sobering conclusion: Years of working with industry on a voluntary approach already brought down the number of mobile phone chargers from 30 to 3 within the last decade, but could not deliver a complete solution.

With the announcement, the EU Commission is proposing legislation to ensure a single charging interface for all relevant devices. This move addresses avoidable electronic waste and inconvenience for consumers due to the multitude of different and incompatible chargers (along with their interfaces) for electronic devices.

The EU Commission has therefore presented a proposal for a revised Radio Equipment Directive. There, the charging port and fast charging technology will be harmonized: USB-C will become the standard connector for all smartphones, tablets, cameras, headphones, portable speakers and portable video game consoles. In addition, the Commission proposes to unbundle the sale of chargers and electronic devices. The Commission's proposal includes the following:

To provide a single charger, interoperability must be ensured at both ends of the cable – at the electronic device and at the external power supply. For power supplies, USB-A is now the standard. However, interoperability at the device end has been by far the biggest challenge, with manufacturers doing their own thing. The current proposal ends the freedom of choice and achieves standardization. Apple in particular will have to move away from its manufacturer-specific interfaces.

If fewer new chargers are produced and disposed, the EU Commission says, the volume of electronic waste will fall by nearly a thousand tons a year. Improved consumer information will help consumers understand whether their existing chargers meet the requirements of their new device or make it easier to choose a compatible charger. Combined with the other measures, this would help reduce new charger purchases and save consumers EUR250 million a year on unnecessarily purchased chargers, according to the EU Commission.

The interoperability of the external power supply will be the subject of a review of the Commission's Ecodesign Regulation. This will be launched during this year 2021 to align the date of entry into force with that of the proposal presented today. The Commission expects this to deliver greater consumer convenience while reducing the environmental footprint associated with the manufacture and disposal of chargers. This, in turn, is expected to support the environmental and digital transformation.

The Commission's proposal now goes to the European Parliament as a revised directive. This must be adopted by the EU Parliament and Council in the ordinary legislative procedure (co-decision). A transitional period of 24 months from the date of adoption is intended to provide industry with sufficient time to adapt before entry into force.

This entry was posted in devices and tagged devices. Bookmark the permalink.