Vulnerability in 100 million IP cameras from Hikvision and OEMs

Hikvision has been founded in 2001, and is a Chinese provider of video surveillance products and solutions that had 42,685 employees in 2021. Its turnover is now several billion euros and its security cameras are also widely used in Germany. In addition, Hikvsion cameras are sold by many OEMs.

In 2019, it became known that the company had advertised a security camera as being able to detect ethnic minorities, such as Uyghurs. After critical inquiries regarding Chinese human rights violations against Uyghurs, the company deleted the product page. 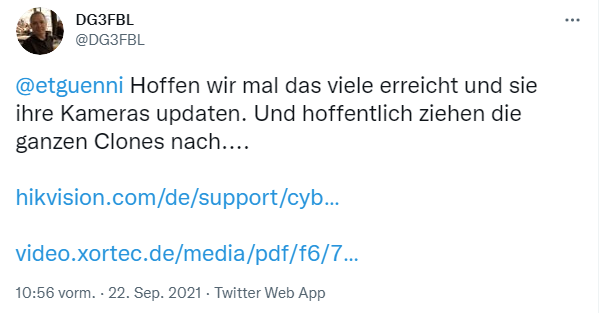 The vulnerability was first discovered and reported in June 2021 by security specialists from Watchful IP. All camera models listed in security advisory HSRC-202109-01, dated September 19, 2021, that are accessible from the Internet via port forwarding have this vulnerability in the older firmware versions. Attackers could then gain full control over these cameras.

Watchful IP states that even firmware from 2016 was tested and found to be vulnerable. Only access to the http(s) server port (usually 80/443) is required. No username or password is required, nor does the camera owner need to perform any actions. The attack cannot be detected by logging on the camera itself. A list of affected camera models and firmware versions can be found within the Watchful IP article, and the patched versions of the firmware are listed in security advisory HSRC-202109-01. Another report on the topic is available here.

This entry was posted in devices, Security, Software and tagged camera, IoT, Security. Bookmark the permalink.