[German]Security researchers at Guardicore have discovered a design flaw in Microsoft Exchange autodiscover protocol that allows attackers to use external autodiscover domains to harvest domain credentials. This is possible because autodiscover domains outside the user's domain (but still in the same TLD) can be abused. Here are some details about this flaw.

Security researcher Amit Serper of security vendor Guardicore has published his new findings in the blog post Autodiscovering the Great Leak. I became aware of the issue via the following tweet. 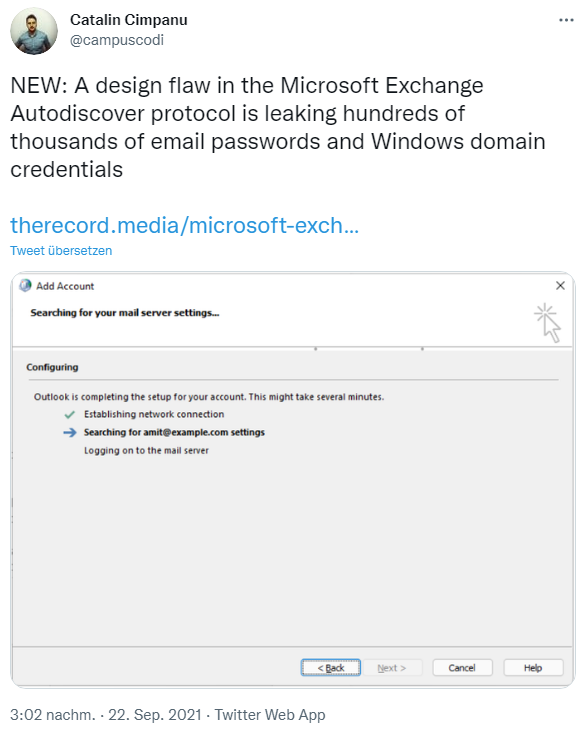 When setting up access for a Microsoft Exchange mailbox, the mail app sends the credentials (username, password) to the server, and then gets the valid configuration reported back. With this, the client is then submitted for the Exchange Server access in question. The protocol was already introduced in Outlook 2007. A short description can be found here and Microsoft has described the implementation of Autodiscover here.

When setting up an Exchange mailbox account within a mail app, the mail app sends a ping with the mailbox credentials (username, password) to various addresses of the type:

The example.com domain is determined from the @example.com e-mail address specified for the Exchange mailbox. If none of these URLs respond, Autodiscover starts its "back-off" procedure.  This "back-off" mechanism tries to resolve the Autodiscover part of the domain and in the next attempt would return a URL of the type:

If a third party succeeds in registering the domain autodiscover.com, autodiscover.de, etc., the requests with the access data would be pinged to this domain. The security researchers were able to grab and register the following domains:

The domains registered in this way were assigned to a web server controlled by Guardicore security researchers. Then the security researchers waited for web requests to arrive for various autodiscover endpoints. To their surprise, the Guadicore folks found that a significant number of requests were coming in from various domains, IP addresses and clients to the controlled Autodiscover endpoints.

The most notable thing about these requests was that they requested the relative path /Autodiscover/Autodiscover.xml with the authorization header. And that's where the credentials for HTTP basic authentication were stored. 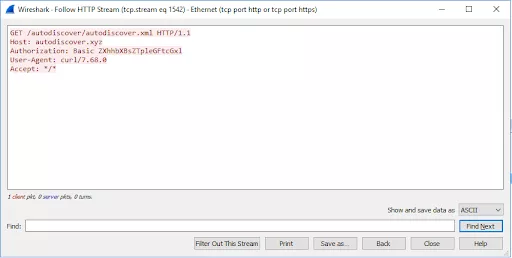 What was alarming about a large number of the requests was that the made no attempt to first check if the resource was even available or even existed on the server (triggers an HTTP 404 error). Rather, the credentials were sent right along with the first request.

From April 16 to August 25, 2021, security researchers using their Autodiscover honeypot received hundreds of requests with thousands of credentials from users who were trying to set up their email clients, but their email clients could not find the correct Exchange mailbox Autodiscover endpoint. Companies and organizations from various sectors were affected. Not only were credentials in plain text, but so were OAuth tokens.

The warning about self-signed certificates, which may appear on the client, could also be suppressed with a LetsEncrypt certificate. The security researcher has summarized the details in this blog post. There he also gives hints on how the problem could be mitigated.

This entry was posted in Security, Software, Windows and tagged Exchange, Security. Bookmark the permalink.