Windows 10 and Windows Server 2019: No refresh for Citrix apps

[German]Brief information for administrators who virtualize Citrix apps via Windows Server 2019 on Windows 10. When publishing Virtual Apps on Windows Server 2019 (as well as Windows 10 clients), there is an issue that no refresh is performed in file dialogs. This had been fixed before, but seems to be reappearing as an issue. However, there is a workaround from Citrix in the form of a registry intervention.

I became aware of the issue on Twitter via the following tweet. James Rankin explained the issue in this article and accompanied it with short videos. 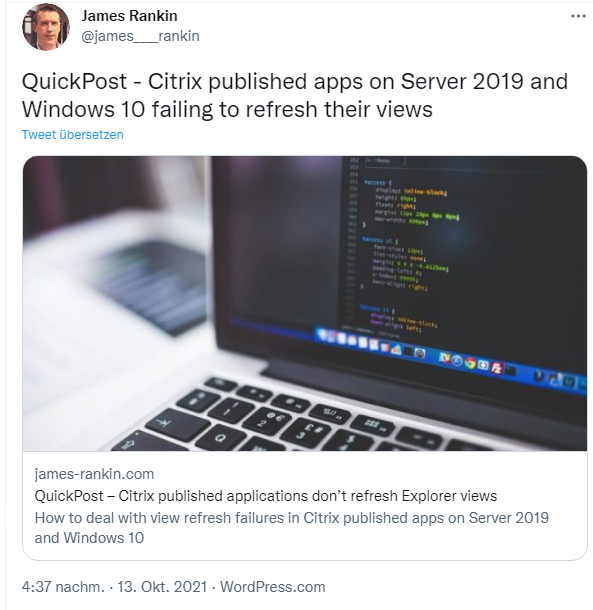 The problem is that the Citrix Virtual Apps on the client do not perform refresh in the file dialog boxes (common file dialog). If the user creates a folder or file in a dialog, or renames or deletes an entry, this is not displayed in the dialog. The user must always perform a manual refresh by pressing the F5 key.

The problem probably occurred before on Windows Server 2016, but was then fixed by an update from Microsoft. Now the bug seems to occur again with Windows Server 2019 (Citrix already published this support article about it in March 2021). However, the Citrix Virtual Apps and Desktops Known Issues page still lists the bug. Citrix suggests making the following registry entry.

These changes require administrative privileges to access the key. James Rankin describes a workaround in this articlevia registry entries to mitigate the issue.