[German]In October 2021, Windows 11 users received the first cumulative update for this operating system. Microsoft apparently encounters a problem with the size of its update packages, because especially people with a lack of high-speed Internet are not very enthusiastic about the size of the download. Therefore, Microsoft has optimized the size of the update packages and was able to reduce them by up to 40%.

The sheer size of many Windows updates drives some users to despair. If you still use Office, you quickly reach 700 MByte to over 1 GByte of downloads per patchday. On the other hand, I just learned from Microsoft that more than 20 million Americans don't have access to high-speed broadband. That doesn't just evoke joy, especially when you have to constantly pull cumulative updates for Windows. And administrators of a WSUS are not pleased either when many gigabytes of disk space are needed to store the updates for the clients.

Microsoft is get slowly aware, that the rapid pace of perceived Windows security and quality improvements, distributing this large amount of updated content takes up significant bandwidth. Reducing download times is therefore a jumping off point. On top of that, Microsoft has realized that users on slower networks may have trouble keeping their computers up to date with the latest security fixes if they can't download the package. Those who even have a volume-based data plan will look entirely as if it is torched by sometimes pointless updates.

Microsoft has recognized it: There is the problem of a (too) large number of Windows updates. Therefore, Microsoft developers have started to optimize the size of the cumulative updates (MSU) for Windows 11. There have been such actions in the past (see links at the end of the article). But now it was Windows 11's turn. I came across the topic via the following tweet, which Microsoft addressed in the Techcommunity post  How Microsoft reduced Windows 11 update size by 40%. 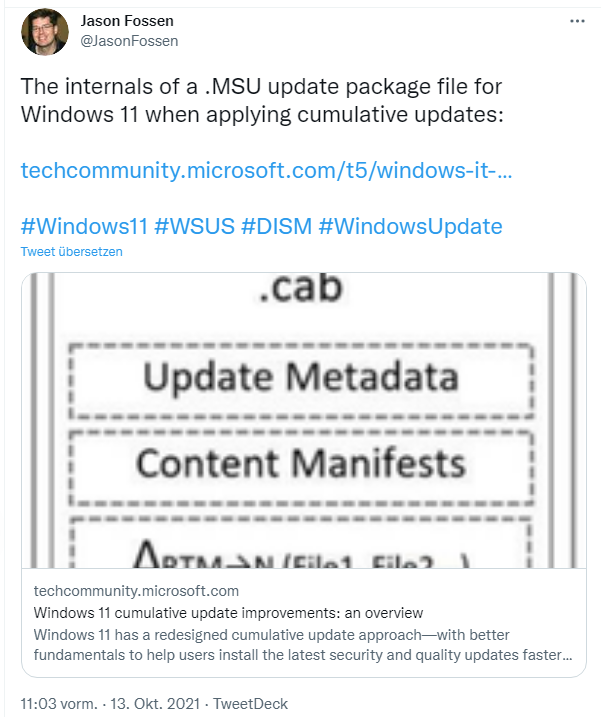 In addition to rural communities with limited access to high-speed broadband, hybrid and remote work arrangements have increased the complexity of update distribution for many enterprises. Without high-speed internal networks to distribute updates to devices, organizations must rely on their virtual private networks and remote workers' Internet connections to ensure update distribution. Minimizing network traffic increases the speed of security patches and ensures that remote workers are protected no matter where they are.In the Techcommunity post, Microsoft describes how its developers mitigated some of these issues with a new compression technology and reduced the size of quality updates in Windows 11 by 40%. The details can be read here.