[German]The German based automotive supplier Eberspächer has probably fallen victim to a successful cyber attack on its IT systems. This was confirmed by the company on October 26, 2021, without disclosing any further details. However, since the workforce has been put on short-time work in the meantime, I assume it was a successful ransomware attack.

The cyber attack is confirmed on the Eberspächer Group's press section website. There, it currently only states:

Eberspächer Group has been the target of an organized cyber attack. The IT infrastructure is affected. To protect our customers, employees and partners, the necessary steps were taken immediately to counter the attack with targeted measures.

Our team is working at full speed with external cybersecurity specialists and data forensic experts to eliminate the threat and restore normal operations. The relevant investigative authorities have been called in. 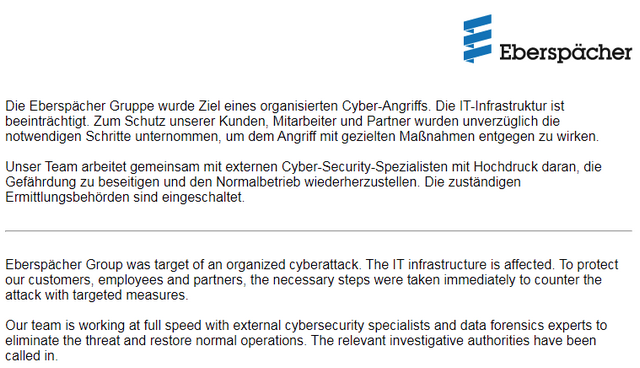 However, there are not too many details, the company is silent. The news was probably announced on October 26, 2021, and the German Stuttgarter Nachrichten writes here that the Stuttgart public prosecutor's office is investigating on suspicion of computer sabotage and attempted extortion. German Handelsblatt writes that the manufacturer's website has been unavailable since Monday and suspects a serious attack. Even the telephone connections have been cut. This reminds me of the attack on the Pilz company (see Erfolgreicher Cyberangriff auf die Pilz GmbH & Co. KG), which was unable to work for weeks. The Record has this article, but also with not further details about the attack itself.

German Stuttgarter Nachrichten now report in this article that the company has applied for short-time work at its headquarters in Esslingen as a result of the incident. A spokeswoman for the company confirmed that a supplementary collective agreement had been concluded with the IG Metall trade union. This would allow 100 percent short-time work with immediate effect, i.e. the employees would be sent home. The whole thing probably affects about 1,000 employees at the headquarters.

Eberspächer is a medium-sized company which employs around 9900 people at 80 locations worldwide (11 in Germany) in 2020. The group of companies specializes in exhaust technology, air conditioning and heating systems in cars, as well as vehicle electronics. The exhaust division accounts for by far the largest share of sales (source).