Microsoft, sustainability and Windows 11 as an environmental disaster

[German]Let's take a closer look at  Microsoft and the promise to become sustainabile. I just saw an announcement for a Microsoft Sustainability Kick-Off event. Microsoft say it's working to protect the environment. On the other hand, there are Surface models that score 1 or 2 out of 10 possible points in the repairability index. In addition, there is the matter of the just released Windows 11. 50 percent of the current devices do not meet the minimum requirements for Windows 11. In January 2023, all devices with Windows 7 ESU and Windows 8.1 will be removed from support – and support for Windows 10 will end in October 2025. Millions of tons of electronic waste will be generated worldwide by PCs that are not suitable for the next Windows generation. Is that sustainability in practice?

This topic has been on my agenda for a while. But I'm bringing it up now that the following (German) tweet has just come to my attention. 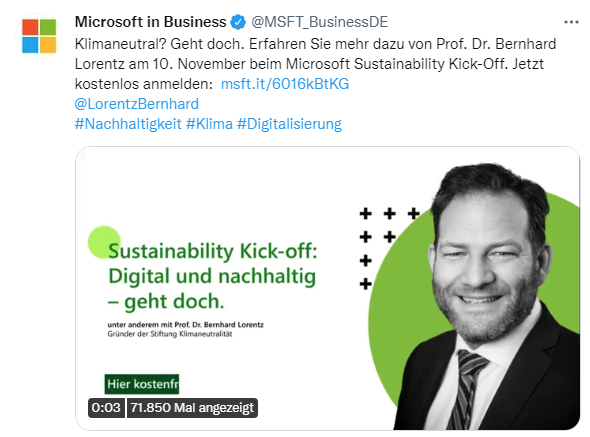 But there are other tweets, also in English, where Microsoft promise to save the environment, like the post below. 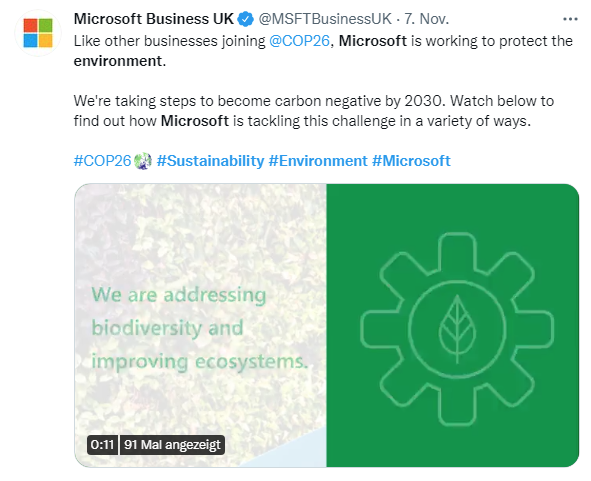 It's commendable to kick off sustainability with a meeting. Every little bit helps. But the question is: How is Microsoft otherwise positioned? Is this green washing and marketing-speak?

Microsoft offer various Surface models for its clientele. Those who have been following my German blog for years know that the Surfaces sometimes suffer from serial defects and early failures. The team from iFixit has picked up numerous new Surface models in the last few years, disassembled them and tested their repairability. The devices consistently came up with a lousy repairability index between 1 and 2 on a scale up to 10 (best repairability).

The devices are stuck together and can only be opened by destroying them. Nothing can be repaired on a Surface – in case of warranty issues or hardware failures, the device is scrapped and the user gets a replacement device. I hadn't addressed it here on the blog, but Microsoft shareholders set up this Resulution in July 2021 through the environmental organization "As you Sow" to improve the reparability of devices away from the manufacturer. Microsoft was asked to analyze the environmental and social benefits of making its devices easier to repair through measures such as making tools, parts and repair instructions publicly available.

At Neowin, the organization had announced, to partially withdrawing the earlier resolution. This is because Microsoft has agreed to work on various points (availability of spare parts and documentation, study on better repairability of Surface devices and Xbox consoles, establish processes to make it easier for users to repair Surfaces) of this issue.

Microsoft's commitment degenerates completely to a zero number when you look at the development of Windows 11. Microsoft has – probably forced by marketing – set quite harsh criteria for hardware compatibility (see Windows 11: Hardware requirements). In the article Windows 11: Most hardware don't fulfill the minimum requirements, Microsoft reveals by-passing trick, I had quoted a survey by the US company Lansweeper. For this, data from an estimated 30 million Windows devices from 60,000 companies was collected with regard to the Windows 11 minimum requirements.

Analysis of this data shows that, on average, only 44.4% of workstations are eligible for the automatic upgrade to Windows 11. Conversely, a good 55% of workstations are not eligible for an upgrade to Windows 11. On the other hand, Windows 10 support ends in October 2025, which is still a few days away and hopefully some devices will have been scheduled for replacement by then.

But the bottom line is that the minimum hardware requirements for Windows 11 are an economic and ecological GAU. If we assume that more than 1.5 billion devices are running some version of Windows, and currently only 44% of devices are suitable for Windows 11, somewhere around 500 million devices are likely to become e-waste by October 2025. Not to mention unusable peripherals that no longer harmonize with Windows 11. The chip market and the device manufacturers alone will not be able to manage that – it is a scandal that devices that still function well end up as electronic waste due to Windows 11. 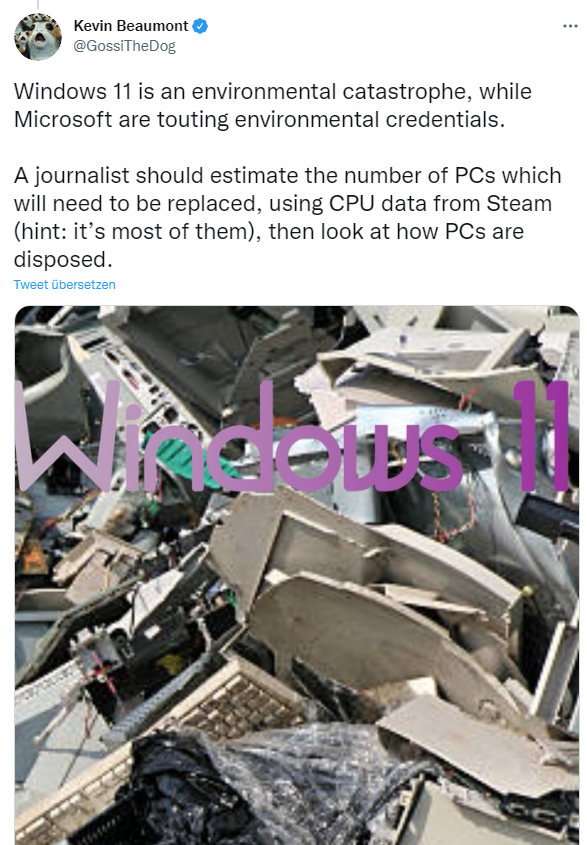 Kevin Beaumont, security expert and even Microsoft employee for a short time, has summed up what Windows 11 means in an image in the above tweet: Windows 11 is an environmental disaster, while Microsoft is acting as an environmentalist. Further, he writes in follow-up tweets: Microsoft will make sales with its new Surface models for Windows 11 at the expense of environmental protection. And Microsoft could always commit to doing without the TPM in Windows 11, thus saving vast amounts of perfectly functioning PCs that end up in the trash.

You shouldn't be more papal than the pope – but from this point of view, Microsoft's above starting shot for sustainability only rings hollow – green washing is still far too tame an expression. Or how do you see it?

1 Response to Microsoft, sustainability and Windows 11 as an environmental disaster