Exchange Online has been down on January 17, 2022, where users have problems accessing their Exchange Online mailboxes and calendars. It seems to affect mainly the regions Australia, North America and Japan. But I also got reports from Europe and other Asian regions. 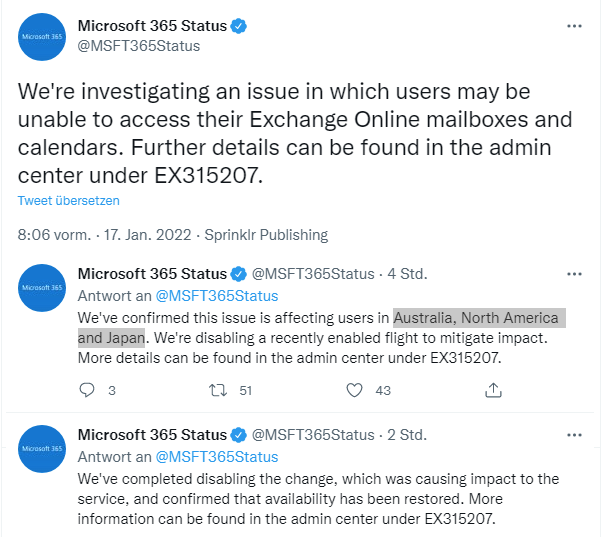 In follow-up tweets comes confirmation that it affects the Australia, North America, and Japan regions. However, there were also tweets here and here, reporting that it affects European users as well:

seems like it's down. at least for me in #Switzerland as well. BTW – what is "admin center" and how to access #EX315207? #Outlook #Down #OutlookDown #ProductivityUp

In the meantime the functions should be available again. More details can be found in the admin center under EX315207.

The cloud is a problem free zone?

Most interesting to me in above tweets: As a workaround, engineers disabled the rollout of a new version (referred to as Flight) and hoped that this could mitigate the impact. Later it states:

We have completed the deactivation of the change that impacted service and confirmed that availability has been restored.

After all, I often hear with patch issues on on-premises systems that Microsoft wants to force people into subscriptions to appropriate products in the cloud. But for me, there are many indications that there are similar problems. The only thing is that Microsoft's competent technicians can intervene quickly. On the other hand, it is also the case that millions of users are left out in the cold when the cloud is down.