[German]Microsoft has just released information that affects Windows 10 and Windows 11, as well as their server counterparts. In order to successfully install updates on these machines, they apparently have to be accessible online via the Internet for a longer period of time every month (at least two, sometimes up to six hours). Microsoft talks about update compliance and update connectivity – that is, a certain behavior, which is required. If this is not ensured, the system will not receive appropriate updates.

In the wild, you can always find Windows systems that, despite Internet access, are not up to date with the latest patches. This can be due to installation errors that prevent an update installation. But it can also simply be due to a lack of online connectivity, which is simply too short. Microsoft therefore wanted to understand why Windows devices are not always up to date. For this purpose, a corresponding investigation was carried out, the results of which have now been published.

I became aware of the topic the days on Twitter via the following tweet, which was taken up on January 27, 2022 in the Techcommunity post Achieve better patch compliance with Update Connectivity data. 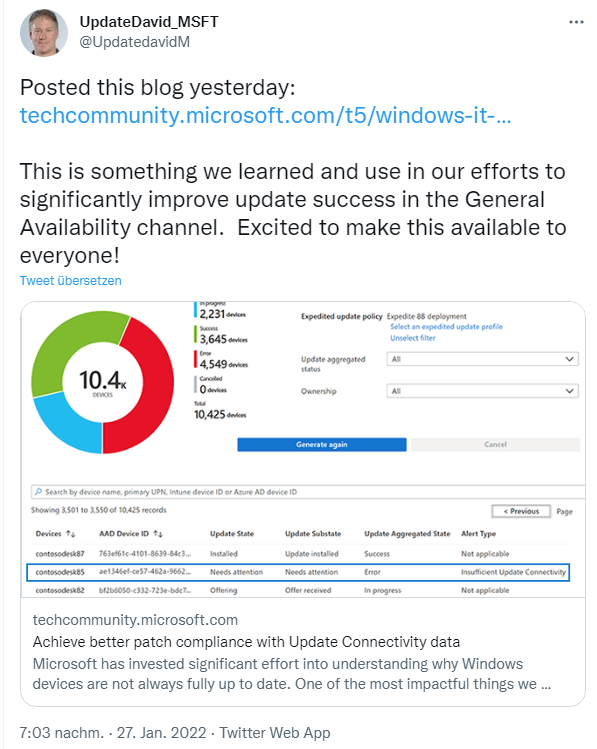 Microsoft has examined how long a device has to be turned on and connected to Windows Update for quality and feature updates to be successfully installed. The results are quite interesting, as Microsoft found that devices that do not meet a certain connection duration can hardly be updated successfully. The data shows that devices:

in order to update reliably. Microsoft refers to this minimum required online time as update connectivity. This, according to Microsoft, allows for a successful download and background installations that can be restarted or resumed once a device is active and connected.

By analyzing the telemetry data, Microsoft was able to determine what failed to keep Windows 10 systems up to date with the latest patches.

The conclusion: insufficient update connectivity is clearly a major cause of devices not being up to date. Microsoft's recommendation to administrators in enterprise environments is:

And it's all so that updates can be downloaded and installed properly. What Microsoft recommend: Make them understand how important it is to keep their devices connected so they are protected and can remain productive.

The post still includes tips on how administrators can see which devices have inadequate update connectivity in Microsoft Intune. Insufficient update connectivity can also be due to devices not being used and then going into power saving mode or deep sleep mode to save power. Administrators would therefore need to ensure that devices do not shut down or go into power-saving mode in this regard.

In my eyes, this is the bankruptcy declaration of the strategists in Redmond. We are currently talking about making everything energy-efficient in order to conserve resources and limit CO-2 emissions. And the geniuses at Microsoft, who were proud of over 1 billion Windows 10 devices, can't think of anything else to do but ask people to please leave their systems on at night so that the updates can be pulled and installed. Here's a picture from my old German article Windows 10: Stopp dem Update-Wahn – Hilfe benötigt.