[German]Smart move (since invention of sliced bread) by Google compared to Microsoft. Google has just made available a first version of its "Chrome OS Flex" operating system for PCs and Macs. The OS is meant to promote sustainability by allowing existing devices to be upgraded to an easy-to-manage, fast and secure Chrome OS operating system. That's a clear sideswipe and attack on Microsoft's bloated Windows 10/11 concept.

You know that, but don't mention it: There's a new OS version that's supposed to make everything newer, nicer, and better – the manufacturer promises. But unfortunately, unfortunately, this comes at the price of needing new machines, the stuff that's just 6 months old just isn't suitable for this cool new Windows 10 or Windows 11 – says Microsoft, and users up and down the country are finding that out the hard way. None of this is sustainable. And after Microsoft failed grandiously with its "Chromebook killer" Windows 10X and went for the resource-consuming Windows 11, there's a rethinking going on among some people as well as a weaning off movement.

That's where Google is digging in with its sleek Chrome OS – though this operating system was previously only intended for new systems from OEMs. It took third-party solutions (neverware) to get Chrome OS onto existing PCs – but many a person used it to breathe new life into existing hardware. Now Google apparently wants to offer its operating system more broadly as Chrome OS Flex for old PCs and Macs. The announcement can be found on this Google page. 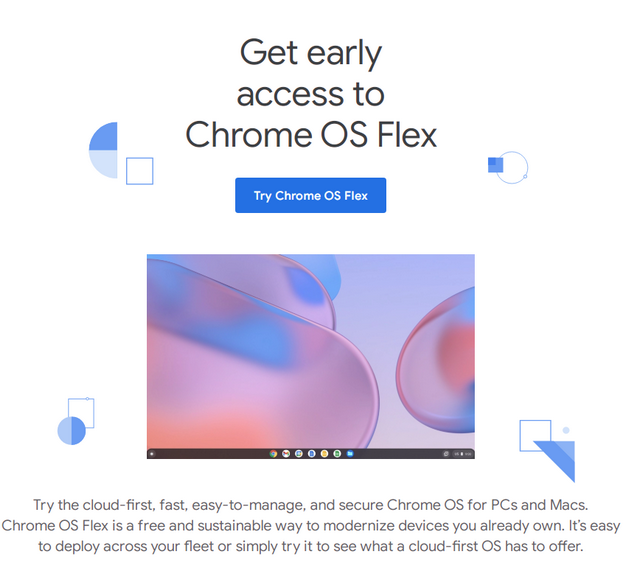 The site offers to just give Chrome OS Flex a try. Google writes: Try the fast, easy-to-manage and secure Chrome OS for PCs and Macs that comes from the cloud. Chrome OS Flex is a free and sustainable way to modernize devices you already own. You can easily deploy it to your fleet or just try it out to see what a cloud-first operating system has to offer. There is some more information about it in this article.

It certainly sounds exciting, even if it is a cloud operating system – which not everyone likes. I'll definitely take a closer look – if it can possibly keep old computers running for the family, that would be something.

This entry was posted in Software and tagged Chrome OS, Mac, PC. Bookmark the permalink.