[German]Microsoft has released a new Windows 11 Insider Preview build 22557 in the Dev Channel on February 16, 2022. Normally, I don't discuss Insider Preview builds here anymore. But this new build promises a number of new features, but is not available for ARM64 PCs. When the announcement of the new features was made, I started to wonder. Because it is promised a handful of new features for insiders, including folders in the pinned apps area in the Start menu or new touch gestures. So I put some thoughts together in a blog post.

The announcement of the new build was made by Amanda Landowski and Brandon LeBlanc in this blog post in the Windows Blog. There are some new features in the new build.

Wow! There are folders in the Start menu …

There, Microsoft writes that they received feedback from many users that they would like to organize Start menu items into folders. Therefore, in this build, the developers introduce the first version of folders in the Start menu. The description states: 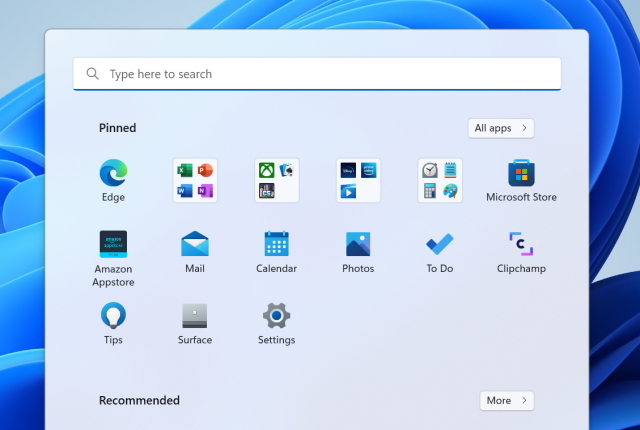 Folders in the Windows 11 Start menu

Simply drag one app over another to create a folder. You can add more apps to a folder, rearrange apps within a folder, and remove apps from a folder.

Furthermore, the Microsoft folks praise some new touch gestures that can be used on the Start menu, or the area called Start, for swiping in/out. Swipe your finger up from the center of the taskbar to bring up the Start menu. Then, the opened Start menu can be closed again by swiping the finger downwards. Furthermore, it is advised to be on the lookout for more improvements like the ability to name and rename folders in one of the upcoming Insider builds. The post reveals some other small improvements, as is so common with Insider builds.

Am I in the wrong movie?

And then Microsoft had to jump – from the marketing side – to Windows 11 and the developers was forced to reuse the leftover ramp of the discontinued Windows 10X there. This also included a centered Start menu, which was probably once designed for a mobile device. And now you can see from the user feedback that this area called "Start" is practically unusable. People actually want to structure their Start menu – and install third-party tools for it if necessary.

Instead of going there and offering a Windows 10 Start menu as an option in Windows 11 as well, they muddle around in best mobile device mania. The creation of folders is copied from Android – you have to try to create folders on the start page by dragging app icons over other app icons. An approach that's basically totally broken, but can't be done much differently on an Android touch device (unless you use context menus to manage folders). And now Microsoft has nothing else to do but implement this broken approach onto Windows 11.

The fact that Windows 11 is now again aimed at touch devices, and that new gestures have been added for operation, also shows me that the desktop user, who simply wants to work with a mouse and keyboard in his familiar environment, has simply lost focus at Microsoft. With Windows 8.x, Microsoft has already made a belly landing with this approach. Now Redmond is probably reinventing the wheel for the umpteenth time. With the above changes, the next belly landing is looming for me – or am I seeing it all wrong again?