[German]The manufacturer of graphics cards and chips, Nvidia, has probably fallen victim to a cyber attack. Currently, the manufacturer is still investigating the details that affected parts of its internal network. According to my information, it was an attack classified as relatively minor, which is currently still being investigated in terms of its impact. The internal operation of Nvidia's IT was affected for two days, and it is currently unclear whether data was leaked. In addition, the Snatch cyber gang is claiming an attack on McDonald in the US.

Information about a cyberattack on graphics card and graphics chip maker Nvidia has been confirmed by various media outlets for several hours, with The Telegraph (paywall) first reporting. Attackers had penetrated the manufacturer's network. This intrusion caused outages in Nvidia's email systems and developer tools over the past two days. 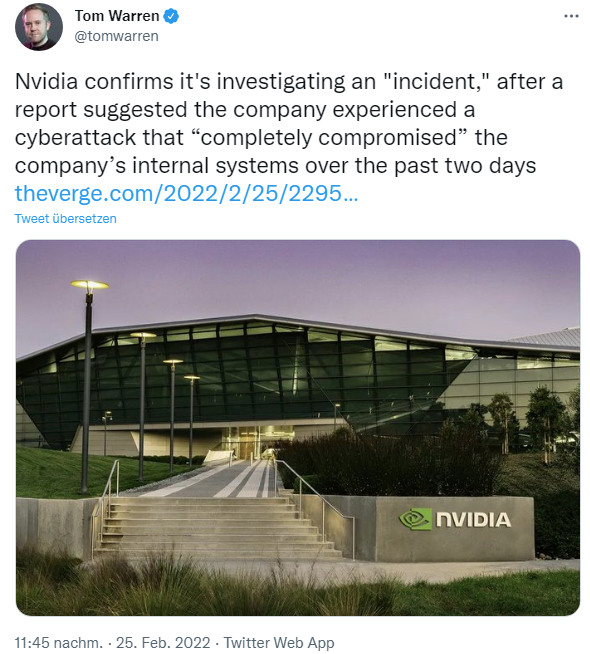 Tom Warren reports on The Verge  that Nvidia has confirmed the attack on its IT system to Reuters and other media. U.S. chipmaker Nvidia Corp. says it is investigating a possible cyberattack. Following the cyberattack, parts of the company's IT were disrupted for two days. Currently, it is unclear whether data was stolen or deleted. To media outlets such as Bleeping Computer, a spokesperson for the company stated:

We are investigating an incident. Our business and commercial activities continue without interruption. We are still working to assess the nature and extent of the incident and have no further information to share at this time.

However, the incident does not appear to be related to the current Ukraine crisis. Speaking to Bloomberg, an unnamed source states that it was a relatively minor security breach.

Currently, I have received the following tweet, which states that McDonalds in the USA has been affected by a ransomware infection from the Snatch group. 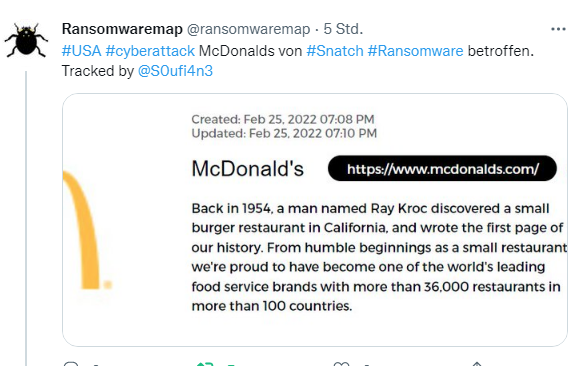 The Daily Mail reports here that the hacker group Snatch claimed to have stolen 500 gigabytes of data from the Chicago-headquartered fast-food giant. The above tweet likely refers to a demand for an undisclosed amount of ransom published on the dark net. Mc Donald was already the victim of a cyber attack in June 2021.