[German]Microsoft ships with Windows 10/11 an app for communication between Android and Windows. This allows the screen of certain Android devices to be displayed on a Windows 10 system and the smartphone to be accessed. In a new blog post, Microsoft has now announced a name change for these apps.

As of March 31, 2022, Microsoft has published the blog post Evolving the connection between your phone and your Windows PC on the Windows Blog. Gerald Haslhofer, General Manager, Mobile and Cross Device Team, announced some rebranding and refreshing of apps.

The Your Phone App

Under Windows 10, there is an app called "Your Phone" that can be used to synchronise data with an Android device. With the Your Phone app and the Microsoft service behind it, SMS messages can be sent and received from Windows 10, the latest (25) photos from the smartphone can be viewed or even the smartphone screen can be mirrored. 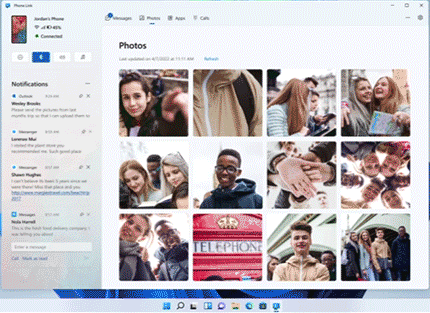 My impression is that Microsoft is trying to copy Apple – who pair iPhones and iPads with Macs and can seamlessly move tasks back and forth between the devices and complete them there. The Microsoft solution requires a compatible phone and a PC in addition to the app, and a Microsoft login (I've never used or tested the service because of the latter).

In the above-mentioned Windows blog post Evolving the connection between your phone and your Windows PC, Microsoft announces that the apps in question will be renamed.

Furthermore, Microsoft writes that the Windows app "Phone Link" has been adapted to the design of the app from Windows 11. Windows 11 Insiders have had this design available in the app for some time. Highlights now include rounded corners, new illustrations and updated icons.

So far, some Samsung smartphones were compatible with this feature. Now the smartphones of the Honor series Magic 3, 4 and V are being added. Later more phone brands shall be supported. But the bulk of mobile devices with Android or even Apple's iPhones are not supported. Any of you using the functions in a more dedicated way?

This entry was posted in Android, Windows and tagged Android, App, Windows. Bookmark the permalink.