[German]Microsoft plans to phase out support for the NetBIOS and LLMNR network protocols used for multicast name resolution in Windows in the future. Currently, this is already being tested in the last Windows Dev and Beta Insider builds. At a later point in time, the complete support in Windows should be dropped.

The days I had already reported in the article Windows 11 Home: SMB1 will be disabled and removed in the future about Microsoft's plans to slowly phase out support for SMB1 (Server Message Block 1) under Windows. Security reasons have prompted Microsoft to take this step. 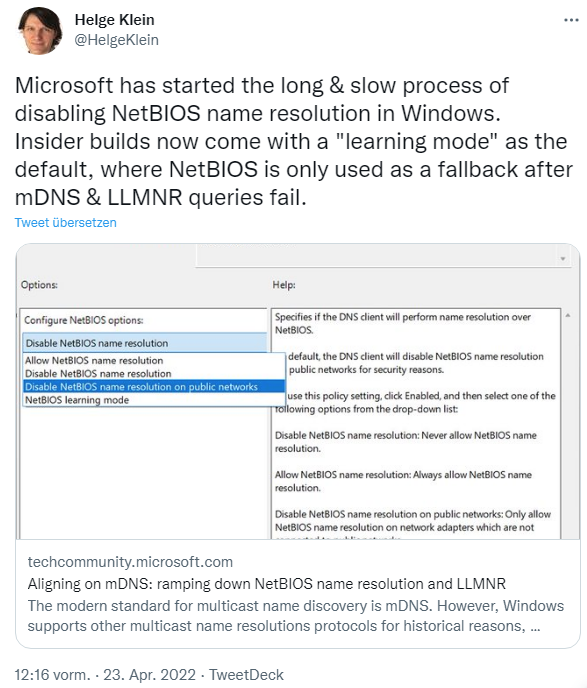 Microsoft has published the Techcommunity post Aligning on mDNS: ramping down NetBIOS name resolution and LLMNR with more information about it – above tweet points out the facts.

NetBIOS and LLMNR will disappear

In the Techcommunity post, Microsoft states that NetBIOS name resolution on mobile interfaces has already been turned off by default for some time. The background is that NetBIOS should never be applied there. Now Redmond goes one step further.

Intervention in case of connection problems

If the above Windows builds experience connection problems on the network, administrators can restore the previous NetBIOS name resolution functionality. To do this, a "Configure NetBIOS Settings" group policy is available that can be toggled between "Allow" or "Learn" modes. This group policy can be found at:

Alternatively, the behavior can be adjusted directly via a registry entry in the key:

To do this, create a REG_DWORD named EnableNetbios and set it to one of the following values:

Currently, the default LLMNR behavior in Windows has not been changed. This is expected to come sometime in the next step, when mDNS is supported as the only multicast name resolution protocol enabled by default in Windows. Microsoft is making this dependent on the phase that is now underway.

Depending on how this first phase goes (so far the data suggests it is going well), these protocols will be disabled by default in all cases in the future. However, Microsoft states that this case of deactivation will follow a careful process that is open to feedback.

This entry was posted in Windows and tagged Netzwork, Windows. Bookmark the permalink.