[German]There are indications that Microsoft is extending its "Search Highlights" feature in the search area of the taskbar to significantly more users. In the German as well as in the English blog, I receive user messages that are more than unsettled about this innovation and believe to have "bent" something. Annoyed users, however, have the option to hide this nonsense that Microsoft's developers are once again unleashing on mankind.

There are things that make you wonder "what's they are doing?". One of them is what Microsoft is doing with its so-called "search highlights" in the search area of the taskbar. I had noticed that something was happening, because in my Twitter circles people were amused about a horse that was displayed in the taskbar, which probably pointed to a horse race (Kentucky Derby). 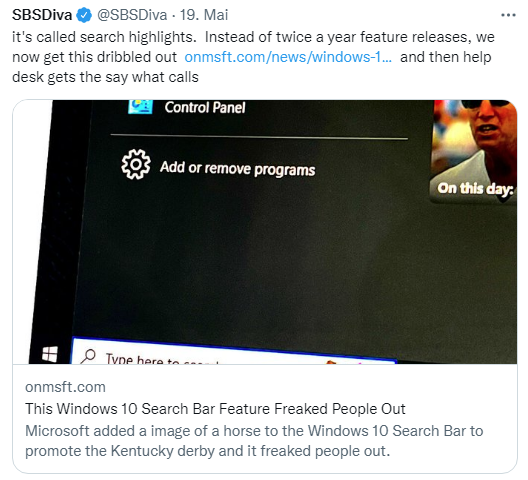 Above tweet vof Susan Bradley thematizes the whole thing (there the horse was faded in and OnMSFT had taken it up). David James had asked in this tweet from May 19, 2022 when these symbols first appeared and posted several examples. 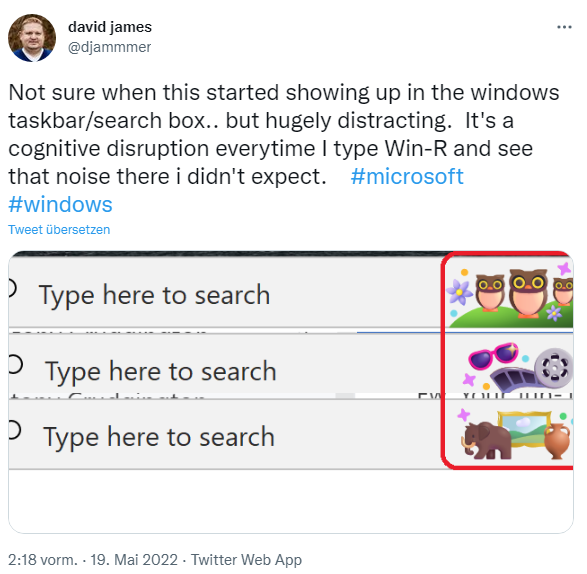 This Twitter user feels kind of pissed off, as he already announced on May 14, 2022, and asks Microsoft how he can disable this crappy "suggestions" icon. 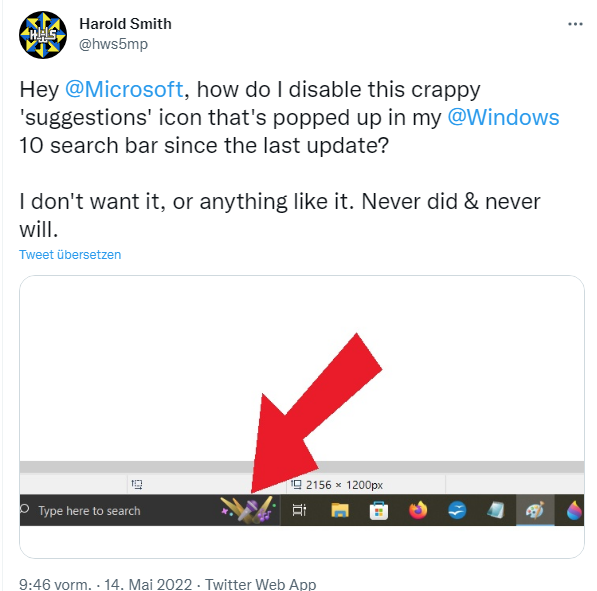 Sounds like an "awakening love", Microsoft always pretends to understand their "customers" – although for me the message "we know what's good for you" from Microsoft always comes through. But also in my German as well as in the English blog the user messages about "suddenly appearing new icons" hit. Here are some typical comments on the topic.

Eberhard: thanks for the clear instructions how to get rid of this unwanted (and therefore annoying and irritating) "feature" [ = the small new icon in the search field of windows] in the "right mouse button context menu" (there only on the "second level").

Michael: Thanks for the explanation of the "search highlights" and the description how to turn them off.

dani: Actually I should deal with Linux for a long time. Finally I am more and more deleting and disabling manufacturer software. I don't want Bing, I don't want Edge (no, really I don't), I don't want to be tracked, I don't want an assistant that always listens. It pisses me off, what the software manufacturers pack everything so one on the device. And constantly with "security" to justify.

Anonymous: Thanks for the simple disable. I got it installed yesterday and it was a pain in the ass the whole time. Annoys me again that I have to do extra research about it. That they simply activate something like that for me.

sirenenmann: I find it childish when suddenly turtles (!) are displayed next to the search box.
Soon a monkey will be displayed as well…

Also some English blog readers got this feature, as the comments here indicated. I myself still don't have this feature on my Windows 10 test system yet, but it's not an "unknown realm" as regular blog readers know.

This "innovative", funny, annoying or – depending on how you look at it – monkey feature that the Microsoft guys are probably unleashing on the user community is called "Search Highlights" and is, in my opinion, activated by Microsoft on the server side (even though the colleagues from Bleeping Computer state here that the feature is coming to Windows 10 systems via update KB5011543). I had mentioned the whole thing in April 2022 in the post Windows 10: New icons for Search Highlights in the search area, who else has this? (April 26, 2022) and also outlined there how to get rid of the annoying feature:

1. Simply right-click the taskbar to open the context menu.

2. Then click on Search in the context menu and in the submenu (by clicking on it) make sure that Show search highlights is no longer selected..

Then the annoying icons next to the search box should disappear. By the way, in the April 2022 post, it was the case that these icons automatically disappeared after a few hours for those affected – because it was an A/B test by Microsoft. Now, however, it seems that the Microsoft folks are unleashing the feature on the part of man kind that is stuck on the Windows 10/11 needle. I've noticed a few "how do I get rid of the annoying icons" type articles over the last few days. The question remains, "what kind of weed are they smoking?" and "has anyone else had this put on their system?"