[German]Folks, it's midsummer, today is the longest day of the year (at least the part that is illuminated by the sun). On the other hand, it's getting quite zap-dark at Microsoft Office 365 right now. Customers who want to check their email via this Microsoft cloud service are running into problems today, June 21, 2022, since about 10:00 am. SharePoint also seems to be affected by the cloud disruption.

German blog reader Georg D. just contacted me via email (thanks for that) and pointed out a service disruption that is building up on Officee65.com in Europe. The German site allestoerungen.de shows that discruption. Georg wrote: 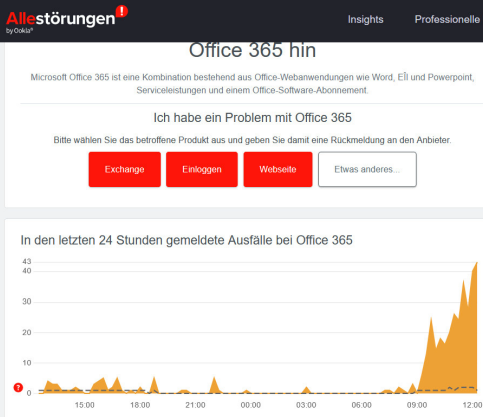 something is going up at O365 (maybe). Email sync disrupted since shortly after 10. In our case, it initially affects functional mailboxes on POP3S and IMAP basis. The fault portals are now slowly showing this as well. In the admin center we first had an incdent for Exchange. Now OneDrive and Sharepoint have also been added. Problems in Sharepoint (search function) I can confirm.

On Twitter I just found this tweet saying that Microsoft is investigating a problem with Exchange Online. Connection issues are occurring there – but it doesn't address the Outlook issues. 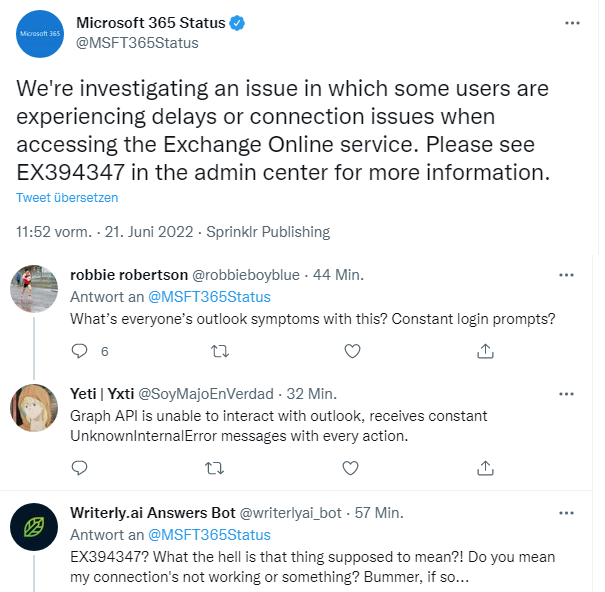 The reactions of users are correspondingly – someone reports that the Graph API can no longer interact with Outlook either. It seems to affect some services from Microsoft. Anyone tangentially affected? Does anyone have more information?

Addendum: In the meantime, Microsoft has further findings – it is probably an infrastructure malfunction, as it says in the following tweets.

We've identified that our traffic management infrastructure is not working as expected. We've successfully rerouted traffic, and we're seeing an improvement in service availability. Updates are available in the admin center under EX394347 and MO394389.

We've determined multiple Microsoft 365 services are experiencing delays, connection and search issues and are investigating the cause of this. Updates can be found in the admin center under EX394347 and MO394389.

Seems to be a worldwide problem, the colleagues from Bleeping Computer report in the meantime in this post about an outage at Microsoft 365, which affects Microsoft Teams and Exchange Online. There seems to be various error patterns among cloud users in the last few hours. These range from constant login prompts to online services to emails that get stuck or cannot be retrieved when sent. The colleagues confirm that it affects services like Exchange Online, Microsoft Teams as well as SharePoint Online, the Graph API and Universal Print. Here are some details from status page. 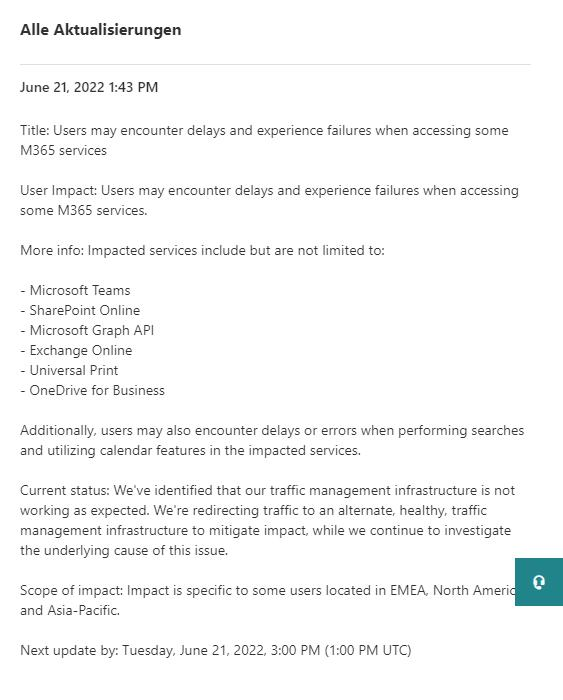 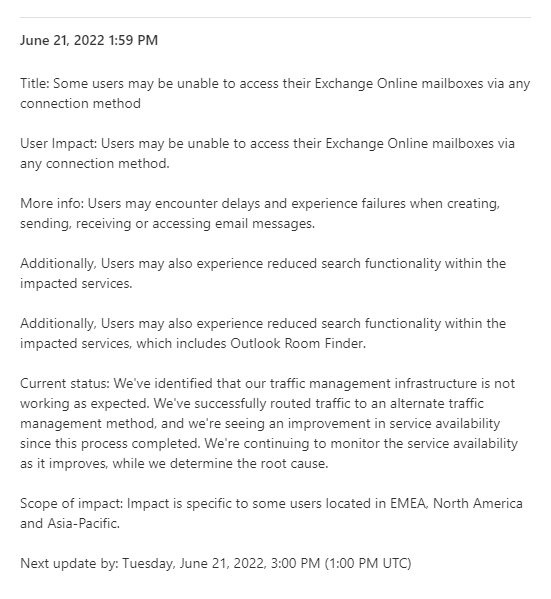 This entry was posted in Cloud, issue and tagged Cloud, issue, Office 365. Bookmark the permalink.