[German]Unpleasant story that is boiling up right now. The operators of the secure email provider Tutanota just announced that Microsoft is now actively prohibiting their users from registering accounts on its platforms (e.g. Microsoft Teams). They say, incident once again confirms how large corporations act as gatekeepers and how European politics is asleep – there should be immediate intervention from competition authorities. Addendum: But there are some things still in the dark.

I became aware of this issue, which was made public by Tutanota operators, via the following tweet by Catalin Cimpanu. 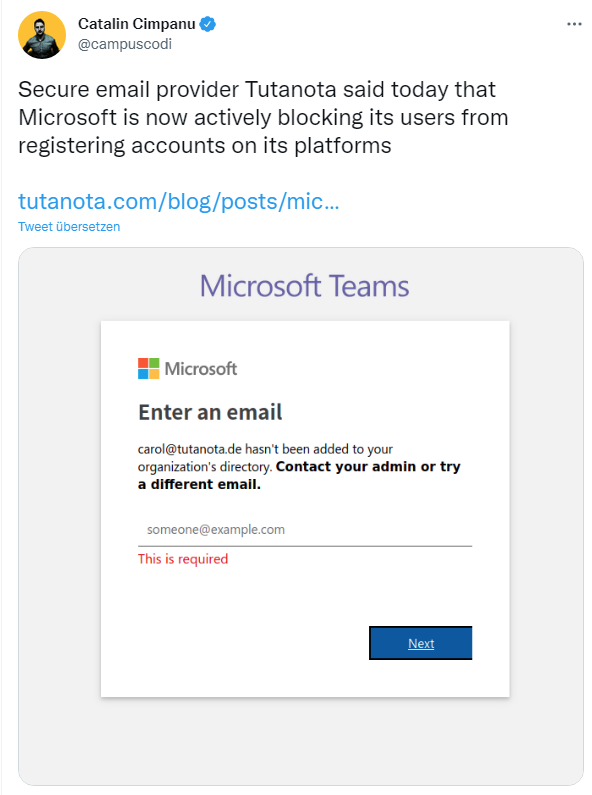 In a corporate environment, administrators can also use e-mail addresses of the company domain for the assignment of Microsoft accounts. However, this does not work for email addresses with the tutanota.de domain, as the screenshot from the above tweet shows. The user is prompted to contact the administrator or use a different email address.

Matthias, the co-founder of Tutanota, documented the issue on August 4, 2022 in the blog post Microsoft blocks Tutanota users from own service: Tutanota users can't register a Microsoft Teams account and Microsoft won't change this. He wrote:

When asked by Tutanota about a change in the current situation, a Microsoft spokesperson simply replied that it was not possible to allow registration of a Teams account with a Tutanota email address. The operators of the email service have repeatedly tried to resolve the issue with Microsoft, but have been unsuccessful.

Addendum: Some things are still in the dark for me. I tried to register a new Microsoft account and uses a name@tutanota.de email. I was able to process all steps within the registry, but I couldn't complete, because I haven't a tutanota.de mail accounts to receive the required confirmation code. So I was wondering, what account type (school, enterprise) is blocked? Or should the issue has been solved?

Tutanota is an open source and end-to-end encryption email software and secure email service with freemium business model. The software and service are developed and managed by German Tutao GmbH, a company with business headquarters in Hannover, Germany. The company's business model does not rely on advertising and is based only on donations and premium subscriptions.

Tutanota offers the sending and receiving of (encrypted) e-mails free of charge for private customers. Standards like PGP are not supported in order to encrypt not only the content of an email, but also the "subject" and the names of the sender ("sender") and the recipients ("toRecipients"). The e-mail addresses and the date on which an e-mail was received or sent remain unencrypted.

Matthias writes in his blog post that politicians on both sides of the Atlantic are discussing stricter antitrust laws to regulate big tech companies.  The current case is, in his eyes, another example of how Microsoft can and does abuse its dominant position to harm competitors. Ultimately, consumers suffer the damage, he wrote.

Matthias wrote, that stronger antitrust laws are urgently needed, because once again the problem seems abundantly clear: large technology companies have the market power to harm smaller competitors by simple means, such as denying customers of smaller companies the use of their own services.

Addendum: If it's true, that a big tech company blocks competitors, anti trust authorities are required. If technical reasons are blocking this attempt, Microsoft has probably to explain, why they didn't explanin that to Tutanota – and Tutanota has to explain, which account type shows the block notification mentioned above. There are still too many things in the dark.

Nevertheless, anyone who considers Microsoft and its products to be "without alternative" should urgently think about this and the dependencies, we are facing more and more. If the accusations made by Tutanotor are true, we should hope that the operators of Tutanota file a competition complaint against Microsoft with the EU. But it's not clear, if the accusations are true.

Matthias wrote: The last successful antitrust case in the technology sector dates back to 1995 and was brought against Microsoft. At that time, it was about the bundling of Windows with Internet Explorer. The antitrust case was led by the United States against Microsoft, and after losing the case, Microsoft was no longer allowed to bundle Windows with Internet Explorer. That was then the birth of the browser selection screen – and today Windows users still suffer from the fact that an Internet Explorer removed in the features leads to issues in Windows 10, (see Outlook Error: Operation has been cancelled due to restrictions).

Is it just a technical reason?

Addendum 2: Beside the doubts, expressed above, there is another view. After publishing this article, somebody tweeted the message below.

Would explain the whole thing – but Microsoft could have communicated that (probably).

A German administrator left the comment here, that may explain the Tutanator experience. Klause described a similar experience:

Probably it was […] Microsoft itself. We recently had the same case of not being able to add one of our TLD domains to our Exchange Online tenant as another email domain because it was supposedly already in use in another tenant. After endless research, I found out that Microsoft automatically creates a shadow tenant when someone signs up for Power BI Free with an appropriate email address and the domain is not yet associated with any tenant.

I was able to fix this "problem" by creating a Power BI account with a matching mail address, logging into the Admin Portal with it and making it an admin. The credentials with the TXT entry in the DNS I could then also perform as admin. After that I removed the domain link in the shadow tenant and the domain was available again. In our case I added it to the other tenant. Of course, this is not possible with a public provider, who could then regularly encounter the problem.

Known issue. I also had this problem after we tested office365. But you can easily work around it. Create a Microsoft account in the browser and then log in to Teams.

Overall it looks like a technical issue. Welcome to the cloud, when you are not let in.