[German]Users of a printer from the Japanese manufacturer Epson might experience an unpleasant surprise. On certain devices, a message suddenly appears that a "part in the device" has reached the end of its life. The printer still works, but is deactivated by firmware. For Epson, the reason for the message and the deactivation is the built-in ink sponge, which is full. The deactivation of the printer is probably to prevent ink from leaking out and then causing damage to the customer due to printer ink. The problem with this approach is that it smells of planned obsolescence, since the deactivation of the device is probably done via firmware and based on a counter for the number of printouts.

This was uncovered by the US site Fight to Repair in this article (thanks to the blog reader who pointed me to this topic). 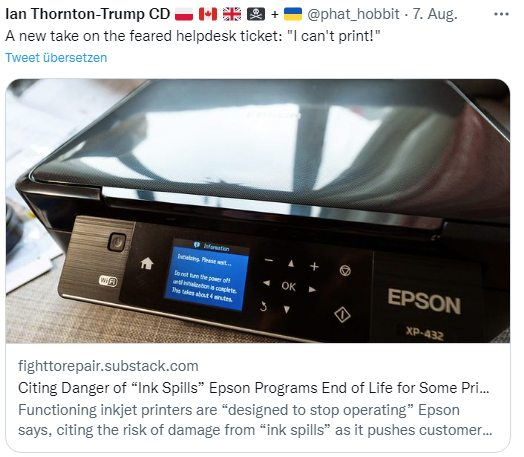 Printers contain parts such as printheads, etc., which at some point limit the life of the equipment. Inkjet printers have a sponge that is supposed to catch ink when cleaning the printheads or when the printheads are in the park position. This sponge (or ink pad) is supposed to become porous or wear out over time, according to Epson. Normally, this only happens at a time when other wear parts have already given up the ghost. But there are users for whom this does not apply – the printer still works perfectly – but suddenly reports that it is deactivated because a part is worn out. One user picked up on this on Twitter in mid-July 2022:

His wife's Epson printer suddenly reported that it had reached the end of its service life. The device then shut itself down. The background to this is the ink sponge described above, which could be replaced by Epson support. However, this is then a repair with costs, which is no longer worthwhile for older devices. People are officially only left to dispose of the deactivated printer and buy a new device.

The deactivation is done by the firmware of the device, which probably determines the time from various parameters. So far, this has probably hardly been noticed, because many devices previously no longer printed cleanly due to other wear parts and were discarded. But users with high print volumes, like Mark Tavern from the above tweet (a lecturer at the University of New Haven in Connecticut) has encountered exactly the problem in his household. The printer would still have been good for many printouts, but has mutated into e-waste due to firmware deactivation. The process causes annoyance because this predetermined breaking point is not communicated to the buyers, but only occurs in the course of operation.

Epson even officially describes this end-of-life event in this support document. There is even an ink pad reset tool for Windows, but it is no longer freely available for download. The Epson printer models L130, L220, L310, L360 and L365 seem to be affected. People would have to contact Epson support to have the printer serviced. However, there are plenty of hits on YouTube using the search term "Epson Ink pad reset" that promise a do it yourself solution.

Epson also addresses the question in the FAQ in the support document, how users can avoid this in the future and no longer run into the Epson end of life message. I forgot the longer answer – because I had only remembered the short version, which many users probably also apply: Never buy an Epson printer again. And with other models (HP, Canon, etc.), you should also be smart about what pitfalls lurk beforehand.

Similar articles:
Epson disables printers for customers due to payment issues through no fault of their own
Is a HP Firmware Update blocking again Third Party Ink Cartridges?

This entry was posted in devices, issue and tagged devices. Bookmark the permalink.

1 Response to Epson disables printers due to "obsolete ink sponges"