Will Microsoft provide ESU support for Windows 7/8.1 and Server beyond January 2023?

On Jan. 14, 2020, Windows 7 SP1 reached its long-announced end of support – and there will be no more security updates by default. However, corporate customers had the option to purchase an ESU license for Windows 7 SP1 to continue receiving security updates between January 2020 to January 2023 at the latest. Microsoft has announced Extended Security Updates support (ESU) as a separate program for corporate customers for this purpose (see Wow! Windows 7 get extended support until January 2023).

The official end of support for Windows 8.1 is also approaching. Users already receive corresponding notices about this event (see Windows 8.1 now shows warnings "end of support in January 2023"). On January 10, 2023, on Microsoft Patchday, this operating system will receive security updates for the last time and will be considered "end-of-life" (EOL) from that point on, as you can read here. The operating system can still be used, but already in February 2023, no more known security vulnerabilities would be closed.

After Windows 7 SP1 and Windows Server 2008 R2 reached the end of support on Jan. 14, 2020, and no longer received security updates by default, Microsoft offered a support extension. Corporate customers had the option since January 2020 to purchase an ESU license for Windows 7 SP1 and Windows Server 2008 R2 to continue receiving security updates between January 2020 to January 2023 at the latest. Microsoft has announced Extended Security Updates support (ESU) as a separate program for corporate customers for this purpose (see Wow! Windows 7 get extended support until January 2023). However, ESU licenses are only available for certain business variants of the operating systems.

Update 2021.11.05:  For Windows 7 SP1 and Windows 7 Professional for Embedded Systems, the Extended Security Update (ESU) Program will be entering its third and final year of extended support beginning on February 8, 2022 and ending on January 10, 2023. 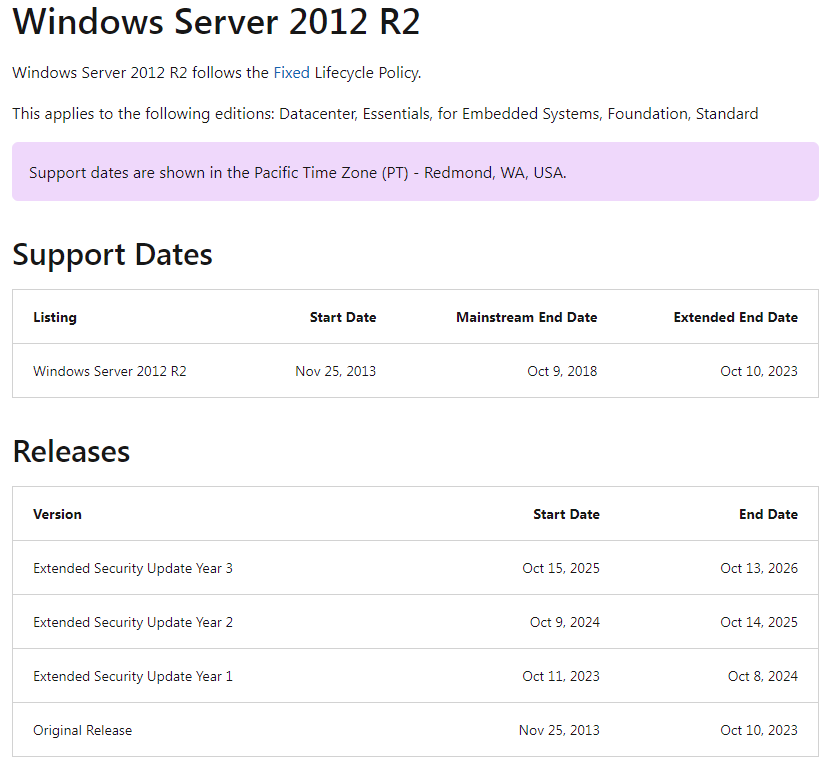 Administrators can also buy ESU licenses in Extended Support according to this website and then also still get security updates until October 13, 2026.

Some readers left comments within my blogs (referencing some internet articles), that they believe, that Microsoft will offer an Extended Security Update Support  for Windows 7 SP1 beyond January 2023 and whether this also comes for Windows 8.1. German blog reader Harald L. has left a comment on August 25, 2022, which I pulled out here (and translated it):

The latter for Win7, although completely different named only as "security update" is the same KB number as for Server 2008 R2 and also links to the KB page with the ESU preparation.

To August 26, 2022, the blog reader then added the following information:

Addendum: since today also the Win7 packages are called ESU Licensing Preparation Package in WSUS just like the others with the same KB number.

Something is happening – and I link to this German article from deskmodder.de, who already pointed out in July 2022 that Windows 7 SP1 could possibly get another three years of security updates. Basis is probably a finding of user Aboddi86, who wants to have found in the July 2022 updates for Windows 7 SP1 ESU licenses and keys for the additional years 4, 5 and 6.

However, it should be noted that other than my comments above, I am not aware of any plans to offer ESU support for Windows 7 SP1 and Windows 8.1 beyond January 2023. If I look at the names of the Extended Security Updates (ESU) Licensing Preparation Package files above, they correspond to the ESU support extensions for Windows Server 2008 /R2 and Windows Server /R2 mentioned above. However, it is interesting that the client operating systems Windows 7 SP1 and Windows 8.1 are explicitly mentioned. So it will be an exciting story if Microsoft comes around the corner with something like this in November 2022. If that happens, it will be exciting to see whether there will also be a bypass ESU that normal users can use to install the security updates on the Windows clients.

Addendum: I briefly checked with Mitja Kolsek from ACROS Security. They will provide micropatches for the 0patch agent as long as there are security updates for the respective operating systems. Here is the info:

Thanks for reaching out. Our understanding is that Server 2008 R2 will ran additional year of ESU but we didn't hear anything similar for Windows 7. In any case, 0patch will continue providing patches for both for at least one more year, while we're "security-adopting" additional Windows versions as they go out of support. We're currently providing critical security patches for Windows 7, Server 2008 R2, and Windows 10 versions 1803, 1809, 1903, 1909 and 2004, and plan to allow users to stay securely on Windows 10 for a long time to avoid forced (and often costly) migration to Windows 11.

Windows Server 2008/R2 will be covered for at least one year.

9 Responses to Will Microsoft provide ESU support for Windows 7/8.1 and Server beyond January 2023?