Yandex Go hacked, someone orders all cabs in Moscow to the square (Sept. 1, 2022)

[German]Since the invasion of Ukraine, Russia has also been targeted by various hacker groups. The days hackers probably managed to hack the service Yandex Taxi. Then the attackers simply ordered all available cabs to a certain address in the center of Moscow. It is easy to imagine the traffic chaos that must have prevailed there.

I found the first news on reddit.com, with this post referring to a Twitter post about the event. According to Forbes Russia, on the morning of September 1, 2022, motorists in Moscow complained about the unusual accumulation of cabs on Kutuzovsky Avenue in the west of the capital. Motorists were stuck in the traffic jam caused by the accumulation of cabs for about 40 minutes. 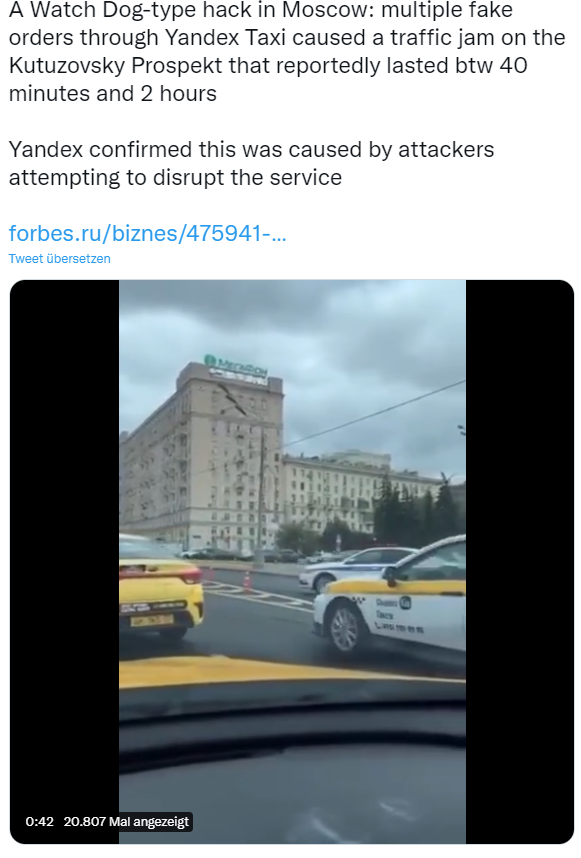 The cause is also known, according to the Russian-language article by Forbes. There were mass orders on the Yandex Taxi service in the Fili district of Moscow, ordering all available vehicles to Kutuzovsky Prospekt. However, all these orders were fakes. As a result, there was this huge traffic jam on Kutuzovsky Avenue. The Yandex.Go press service confirmed this to Forbes Russia, that the Yandex cab service "had a malfunction."

On the morning of September 1, Yandex Taxi faced an attempt by attackers to disrupt the service – several dozen drivers received mass orders in the Fili district.

Bond movie when the morning traffic was brought to a standstill by the cabs. According to this news, the company said that the security service immediately stopped these attempts. The company stressed that in order to eliminate such incidents in the future, "the algorithm for detecting and preventing such attacks has already been improved."

The whole thing seems to have been a (nasty) joke. According to this Swiss article, a message allegedly appeared on the display of the affected drivers asking them to switch to competitor Wheely. This is according to a report from the Polish portal wprost.pl, which refers to an expert from the daily newspaper Izvestia. However, this is said to have been a diversionary tactic. It is currently unknown who the hackers were.

Yandex is a Russian Internet services company that operates the fifth largest search engine in the world and offers numerous other services. However, Yandex has been under heavy pressure for some time because of Kremlin influence. Yandex was already the focus of hackers years ago. The provider promised to resolve the compensation issue in the near future.