Has Microsoft shown a GUI prototype of the next Windows (accidentally) at Ignite?

[German]At Microsoft's Ignite conference, which took place last week, there were numerous presentations about new Microsoft products. It seems that a GUI of a Windows desktop appeared, which has nothing to do with current Windows 10/Windows 11 desktops. So there is speculation that it is an early developer variant of the next Windows generation (Windows 12 or whatever it will be called).

I became aware of the issue on Twitter the other day via a corresponding screenshot from Zack Bowden (Windows Central), which was picked up in more detail in this Windows Central article. 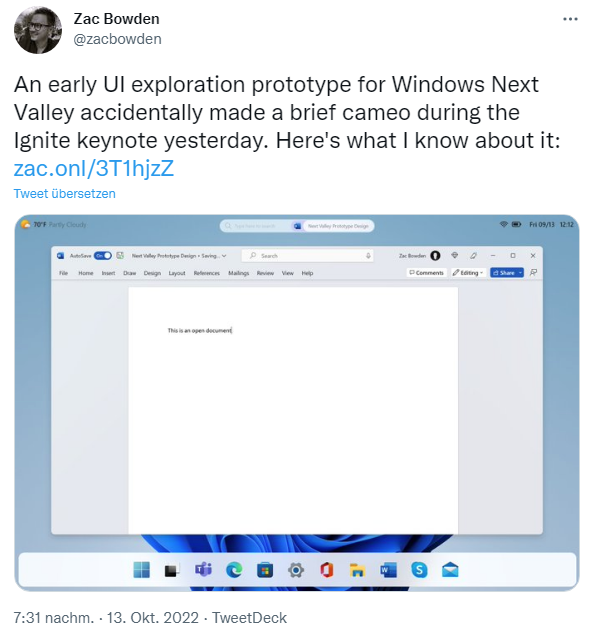 According to Bowden, some people who watched the Ignite keynote noticed the desktop display shown in the above tweet. A user nicknamed Firecube picked up on it on Twitter. 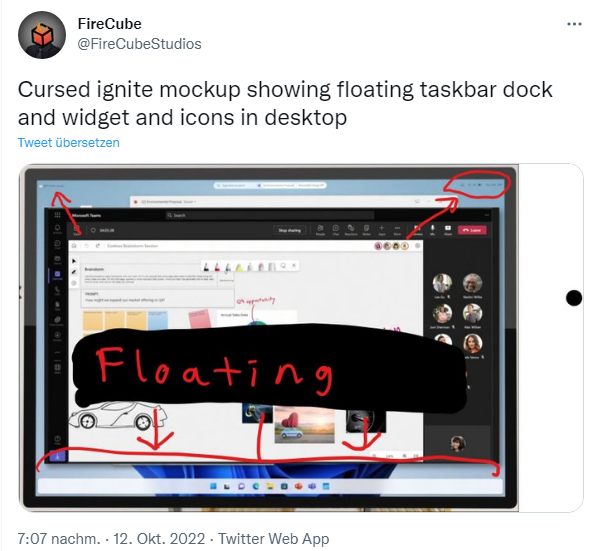 He wrote about it being an Ignite mockup with floating taskbar dock, widget and icons on the desktop. The mockup was briefly shown within , which the keynote of Microsoft's boss, Satya Nadella, during presenting new features for Microsoft Teams. There are now speculating that this was unintentionally made a new GUI design public. But it could show the direction of what the user interface of the next Windows (would be Windows 12, if Microsoft leaves it counting) could look.

The upcoming Windows would be based on macOS with a floating taskbar, where the dock is also centered on the desktop. New, besides a floating taskbar at the bottom, is also the design of the system icons in the window at the top right, as well as a floating search field in the middle of the title bar and the display for the weather at the top left of the title bar – where the system menu usually appears. Bowden writes that his inbox is now flooded with inquiries about whether this is the "wishful thinking of an eager intern or a misunderstanding between the product and design teams.

Bowden says that he has seen this design prototype before. He was shown these preliminary design ideas when he first received information about the Next Valley GUI (next Windows interface). Such design prototypes are created internally by Microsoft for research and investigation. Whether these prototypes ever make it to the public is still open. But Bowden writes that his sources told him that the UI briefly shown at Ignite was representative of the design goals Microsoft hopes to achieve with the next version of Windows. Now we have to wait and see what comes out of it, so 2024 or 2025 we might know more.