[German]Microsoft already announced last Friday, November 18, 2022, that they are now looking to broadly distribute their Windows 10 October 2022 Update (commonly referred to as Windows 10 22H2). This marks the beginning of the wide rollout, and the feature upgrade to this OS version is likely seen as ready for use in corporate environments.

This update brings only a very limited amount of new features and functionality. Microsoft says it has focused on improving stability. I'm not aware of any major issues related to this feature update – but Microsoft had only released the October 2022 rollout to a limited number of compatible machines, so that if there were any bugs, they could stop the rollout and touch things up. 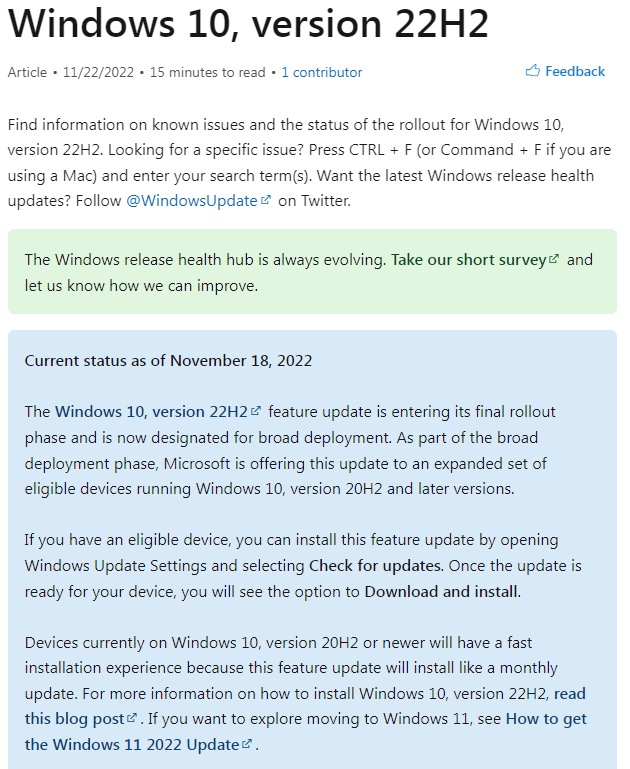 As of November 18, 2022, Microsoft then posted the above announcement on the Windows Realease Health status page. According to Microsoft, the Windows 10 feature update, version 22H2, has entered the final rollout phase and is now slated for broad deployment. As part of the broad deployment phase, Microsoft is offering this update to an expanded group of eligible devices running Windows 10, version 20H2 and later.

Users who have an eligible device can install this feature update by opening Windows Update settings and selecting Check for Updates. Once the update is available for your device, you will see the option to download and install it.

This Windows 10 version will receive 30 months of support in the Enterprise and Education versions (May 13, 2025) , while the Home and Pro versions will no longer receive security updates after 18 months (May 14, 2024) and will have to be replaced by the next feature update. Windows 10 support will then end on October 14, 2025 (with the exception of the LTSC versions).