[German]It looks like Microsoft is internally working on providing Windows users with an indicator that signals whether a VPN connection is in use. In any case, Windows 11 Insider build 25247 contains a feature that has not yet been officially released, which can provide the network icon with a corresponding overlay.

I had already seen the information almost two weeks ago – but since it was an Insider build and the feature is also not yet unlocked, I did not pick it up immediately. However, following reader comments, I'd like to briefly introduce the topic on the blog. The following tweet from November 20, 2022 already shows what exactly it is about. 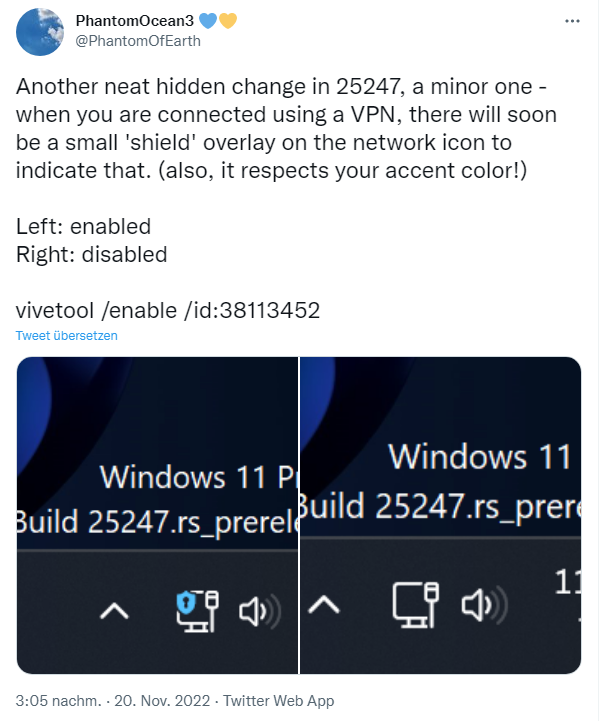 The user noticed a nice but still hidden innovation in Windows 11 Insider Preview Build 25247. When an internal function is enabled, Windows 11 overlays the network displayed in the status bar with a small blue sign. This is supposed to signal a VPN connection. The whole thing can be seen in the above tweet in the left screenshot, while the right screenshot shows the network icon when the function is disabled.

Windows 11 Insider Preview build 25247 was also released as an ISO in the Dev Channel on November 18, 2022. Microsoft announced this in the Windows blog in this post and also revealed some hints about innovations. For example, the time should also get a seconds display in the status area of the taskbar again. However, there is no reference to the VPN overlay icon there. es im Windows-Blog in diesem Beitrag angekündigt und auch einige Hinweise auf Neuerungen offen gelegt. So soll die Uhrzeit auch wieder eine Sekundenanzeige im Statusbereich der Taskleiste erhalten. Allerdings gibt es dort keinen Hinweis auf das VPN-Overlay-Symbol.

Those who have installed theWindows 11 Insider Preview Build 25247 (also released as ISO in the dev channel on November 18, 2022) can unlock the new feature with the vive tool by using the following command.

However, the user who has discovered the fetaure writes on Twitter that it only seems to work when connecting to a VPN via the quick setting or the Network & Internet > VPN page in the settings. The display also does not come when a Wi-Fi connection is used. The feature seems to be in a very early stage of development. So it's possible that it will fly out completely or still be updated and improved.

A vive GUI tool for Windows 11 has been introduced here.