[German]With the Windows 10 Fall Creators Update, two problems may occur after installation or upgrade: Apps are listed in the Start menu with English names, and some tiles have an arrow

I have just verified this on two test machines that I updated with the Insider program and the regular update to Windows 10 version 1709 (32 bit). My Start menu looks like this right after creating a user account. 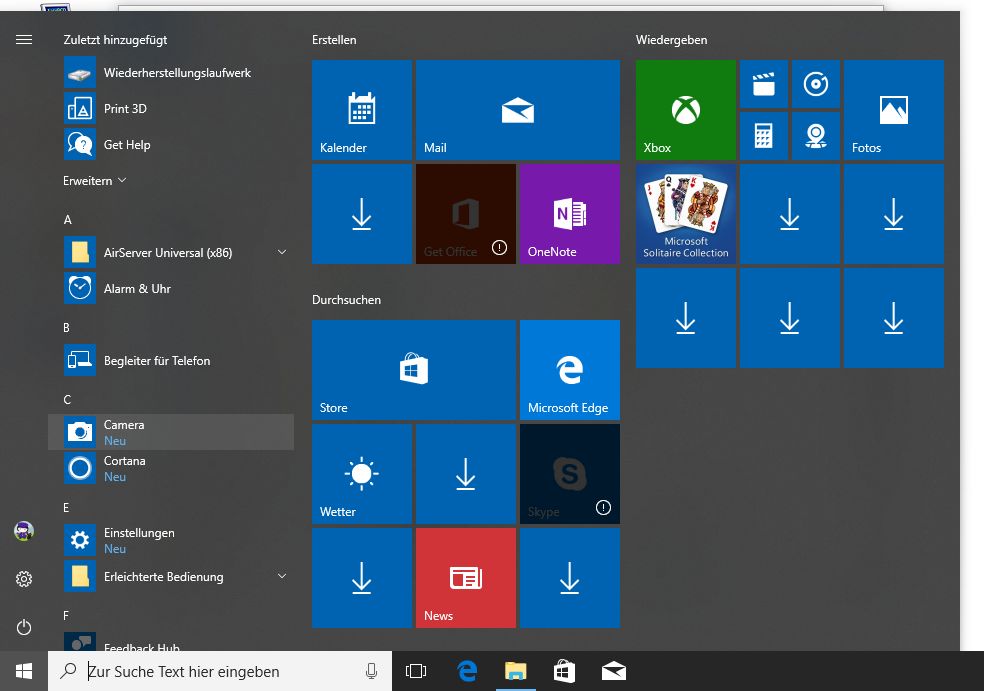 Some of the tiles simply have an arrow pointing downwards (right column). And a lot of Microsoft's build in apps are coming with English app titles, although I've installed a German Windows 10 V1709. Initially I had e. g. Calendar, Weather etc. The above pictures shows the Camera app in the left column – although the app name might be Kamera in German.

To change English app titles to German (in my case), it's sufficient, to click the app tile. The app will be launched and Windows 10 Fall Creators Update is changing the app GUI to German. After this action, the app title is in German too.

The background of this behavior is by design. There are preprovisioned apps without being in the install image. Furthermore, only the basic language (English) is included in a preprovisioned app image (usually in system locale language). This is to keep the image small. During the first update run of the store everything missing will load. But I can't say, it that happened first in Windows 10 V1709 (it was the first time, that I observed that).

The start menu tile with an arrorw indicates, that the app hasn't been downloaded. In previous builds, this download was done automatically. On one of my test systems there was suddenly a row of apps missing, which I reattached via the left column (Pin to 'start') of the start menu.

A second 32-bit test system didn't do anything – there were a lot of tiles showing the download arrow for the corresponding apps. And Windows doesn't tell, which app are still need to be downloaded.

It seems that something blocks downloading apps from store automatically. Sometimes we can blame 3rd party anti virus software – but my machine just has Windows Defender. Also the internet connection is available. What you can try: Go to the store, open the burger menu and go to My Library. 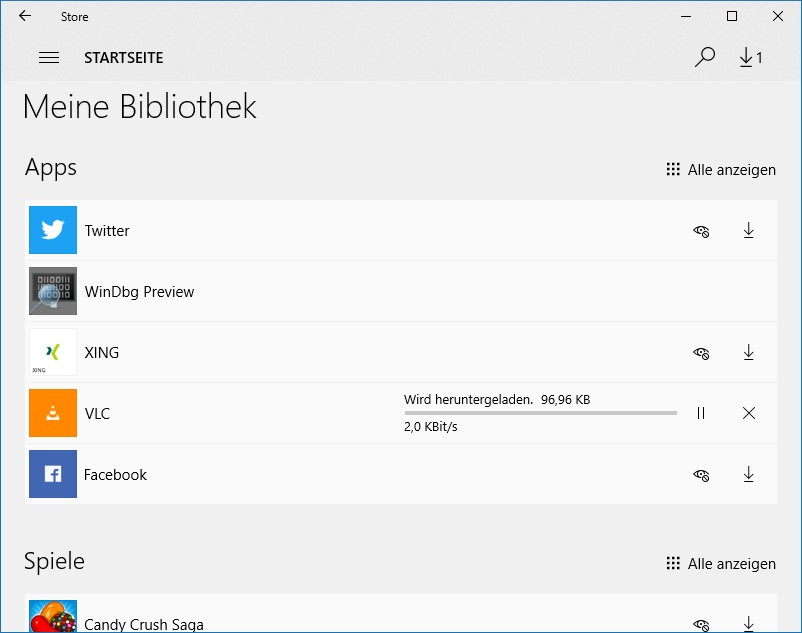 You will see a list of your apps and you shall be able to start a download. Otherwise unpin the empty tiles from start menu and try to re-pin the app again from the left start menu column.

This issue has been observed since Windows 8.1 and is still unfixed. If the apps aren't updated, within the first minutes after install, you have to struggle with this issue. At reddit.com is a thread – someone mentioned, that the build in Administrator account was the cause for that missing tiles (which wasn't the case for me). Another user wrote, that has to rebuild the user account to solve this issue. And here is a thread, where somebody nailed it down to a "Turn off Microsoft consumer experiences" privacy setting.

On my test system I tried a couple of time to shutdown and reboot the system. And suddenly all tiles with download arrows was unpinned from start menu. That's an explanation, why another of my test machines showed a start menu without most of the previous tiles after upgrading to Windows 10 V1709.

Addendum: It seems that this is a bug on Windows 10 Fall Creators Update, see also Windows 10 V1709: Workaround for missing apps …

This entry was posted in Windows and tagged Tip, Windows 10 Fall Creators Update. Bookmark the permalink.