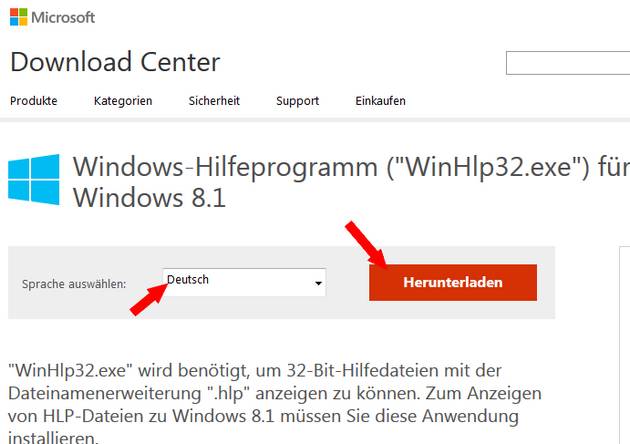 Under normal circumstances it's sufficient, to download and install the appropriate .msu file. I've tested it with success in the past.

Today I was stumbled uppon two entries in German MS answers forum (here and here), where users are claiming, that the old solutions won't work anymore. And I also received a similar e-mail. This user is claiming, that the old help file viewer works till end of November/ begin of December. But now Windows 8.1 fails to show .hlp files.

Currently I'm still investigating this issue (I just startet system restore to set my system back to May 2014). But my current guess is, that either December 9th patches or the today's patch KB 3025390: Fix for screwups in Internet Explorer 11 screwed up something. Any further suggestions are welcome.

Discussing technical background of this issue

Unfortunatly I haven't seen an updated component KB917607 that fixes this issue.

A temporary workaround has been posted at Microsoft Answers-Forum from user Abbodi86 (the same guy who gave us the explanation above):

You can use this temporary workaround (1drv.ms/1AkM3gv broken). Extract the script, and put KB917607 .msu file next to it, then run as admin.

However, this workaround will cause SFC to give an error regarding %windir%\winhlp32.exe – you can ignore in the mean time

Hope it helps – a feedback is appreciated.