Create Windows To Go from any Windows 8/8.1/10 using Rufus

Creating a Windows To Go setup on a USB thumb drive is restricted to Windows Enterprise. But it's possible, to use any version of Windows 8/8.1/10 and convert it to a Windows To Go setup using Rufus. I've tested it with Windows 10 Technical Preview (Build 9926, for Consumers) – works like a champ.

I have blogged several times about Windows To Go and how to create such a setup manually. I wrote my first article years ago, using Windows 8 Developer Preview for Windows To Go (see links at the end of this article). Within this blog post I show, how to use Rufus to create a Windows To Go setup using a core or pro version of Windows 8, 8.1, 10.

What is Windows To Go?

Windows To Go is a portable Windows installation on USB media (thumb drives, disc drives). Microsoft has introduced this feature in Windows 8 Enterprise for business users (admins, maintenance people or mobile users). Windows To Go enables users to carry their own Windows environment and boot it on several computers.

Due to license issues Windows To Go is officially restricted on Enterprise version of Windows 8, 8.1 and Windows 10. Only volume activation assures that Windows To Go will be activated on distinct machines. In Windows Enterprise there is a tool "portable workspace creator", that may be used, to setup a device with Windows To Go.

But there is no technical restriction to prevent users from converting a Windows core or pro version into a Windows To Go setup. If a product key is used, this setup can be activated, but the activation works only for one machine. For many people this is sufficient and it's helpful to have a Windows To Go thumb drive for a machine – it comes handy in case something went wrong.

Windows To Go with a little help from Rufus

I've used the tool Rufus a couple of times to create bootable USB sticks. But recently I stumbled upon a German forum post mentions that Rufus version 2 (still alpha) also supports Windows To Go setups. But this plain info is a bit useless, so I decided to write a blog post explaining the odds and evens.

After selecting a Windows ISO image, Rufus expands the options and offers an option Windows To Go. Selecting this option enables you to transfer the ISO image to the USB devise using the Start button. If the USB media isn't Windows To Go capable, Rufus issues a warning and refuse to copy the image. In this cases I would recommend to use a spare USB disc drive – but be aware, that all data on this media will be deleted.

It was no problem for me, to transfer a 32-bit-Windows 10 (Build 9926) image to my 32-GB-Kingston Data traveller USB thumb drive. I've used the product key NKJFK-GPHP7-G8C3J-P6JXR-HQRJR for activation. The setup can't be used on UEFI systems, but I have several BIOS based netbooks and a slate. This machines was bootable. 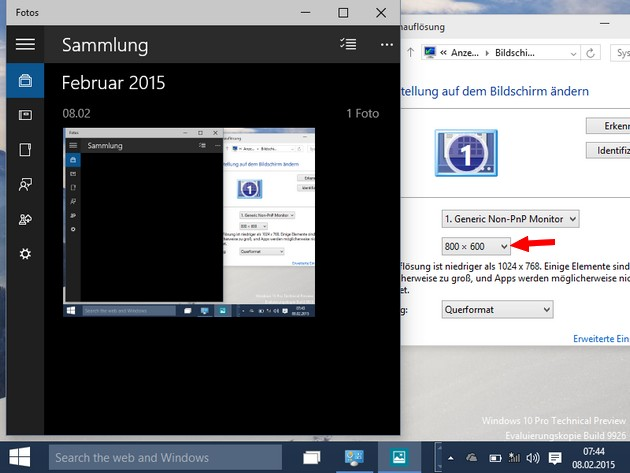 Above is a screenshot of Windows 10 Technical Preview (Build 9932) obtained on a Medion  Akoya E1210 netbook. The screen resolution is 800 x 600 pixel,k and I was able to launch modern UI apps. So, the new windowed Apps are running also on old machines with desktop resolution below 1.024 x 768 pixel.

Update: It seems that Rufus Alpha 2.0.609 doesn't support the option any more. Don't know, whether this feature is gone – 've contacted the developer. If I receive an answer, I will publish it here. I should note, that the Windows To Go option is only offered, a) after you selected a valid ISO image and b) if your OS is at least Windows 8 or newer. Windows 7 SP1 doesn't works.

Windows 8 To Go with Dual-Boot
Windows 8: A cure for To Go Workspace Bug

This entry was posted in computer, Windows and tagged Rufus, Windows 10, Windows To Go. Bookmark the permalink.