[German]Microsoft ships a Connect app with Windows 10 Version 1607 (Anniversary Update). This allows Windows 10 to operate as a Miracast receiver. I've tested this app to get an impression about the reliability of this feature.

I've blogged several times about streaming solutions within my German blog (and also my English blog – see link list at the article end). I've noticed also that Microsoft intends to provide a Miracast receiver in Windows 10 Anniversary Update. This has been addresses in my German Blog post Windows 10 Version 1607 soll Miracast-Empfang unterstützen (Test), where I've tested it with an Insider Preview build.

Windows 10 Version 1607 as a Miracast receiver, how it should work

Windows 10 Anniversary Update comes with a Connect app. If the hardware is Miracast capable, you should be able to use the Windows 10 machine as a Miracast receiver. I have a machine Medion Akoya P2214T (offered by German Lenovo subsidiary Medion) that fits this requirements. To establish a Miracast connection, just try the following steps. 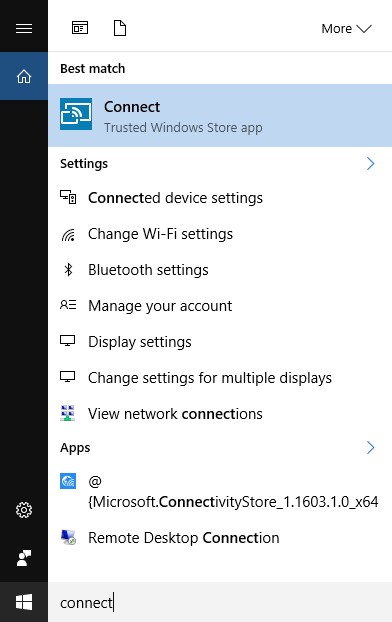 1. Type connect in the taskbar's search box and select the app Connect – that's all. 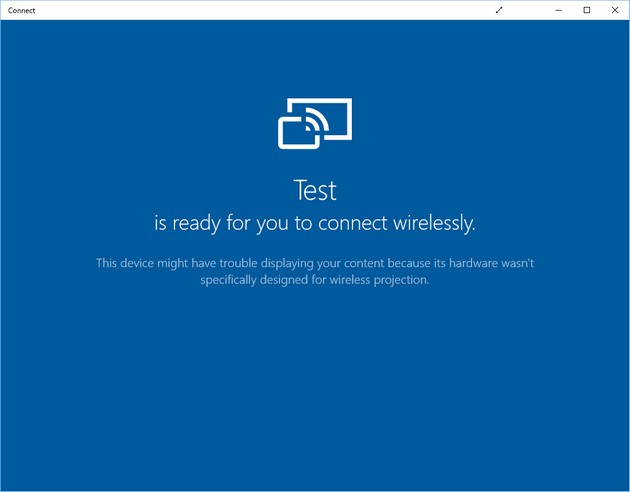 2. Use an Android-, Windows 8.1-, Windows 10- or Windows Phone 8.1/Windows 10 Mobile device to establish a Miracast connection to the Miracast receiver.

The steps required depends on the device and operating system. Streaming to a Miracast receiver works in Windows 10 using projection tile in notification center.

On Windows 8.1 you need to swipe from the right corner to the left, select Devices from the sidebar, then go to Project and select the Miracast receiver (see my German screenshot below). 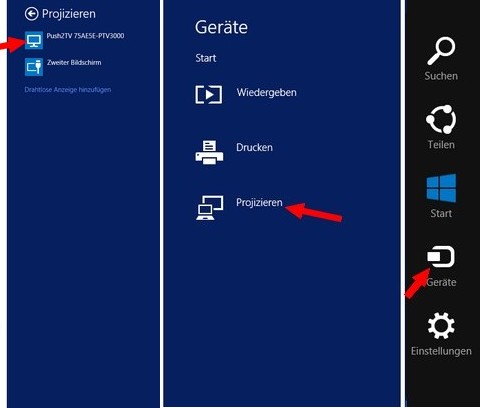 In Android it depends on the Android device. On my Google Nexus 4 with stock Android 5.1.1 I need to swipe from the top down to show the status bar. Then I tap the cast screen icon in the status bar. 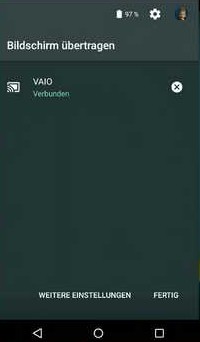 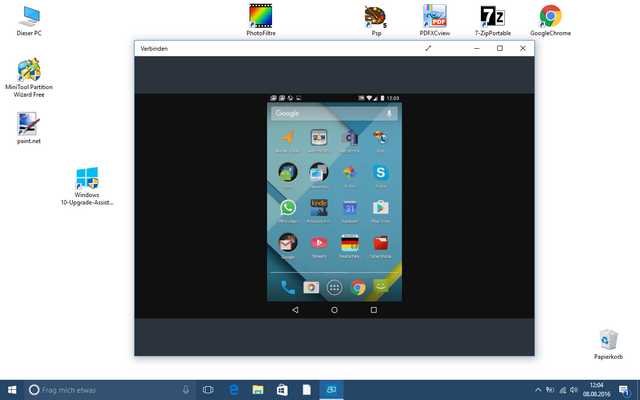 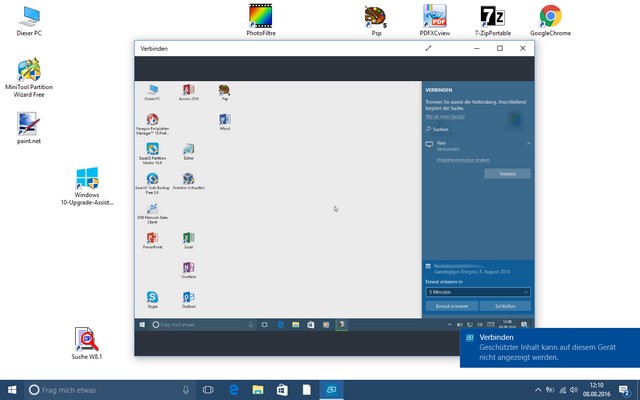 The Medion device is Miracast capable from its hardware. The Sony Vaio notebook is a bit outdated, but I've managed it to turn this machine into a Miracast receiver (I used an USB Wi-Fi receiver that supports NDIS 6.4). I run also App Dynamic AirServer as a reference. AirServer is a software solution running under Windows 8.1 and Windows 10, supporting Apple's AirPlay, Google Cast (Chromecast) and also Miracast protocols as a receiver. I've addressed an older AirServer version within my blog post Windows 8.1 as a Miracast receiver (AirServer Universal 3.0.26). For my test I used AirServer Version 5.0.6. 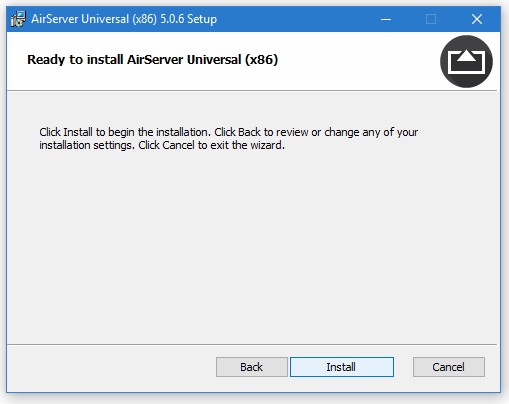 As Miracast sources I used: a Akoya P2214T with Windows 10 Version 1607, a Medion Akoya S6214T with Windows 8.1 and a Google Nexus 4 Smartphone with Android 5.1.1. This seems enough for a first test, although I could extend the test also to a Samsung Galaxy S4 and aNexus 7 (2013) with Android 6.01. The table below shows the results of my Miracast test.

Note: In my first test I just have had a look at "is a connection possible" and what's about latency – I have planned later to test also audio transfer and also streaming to HDMI Miracast receivers, but canceled these tests after obtaining the results below.

As you can see, the Connection app doesn't works well – it's "a pain in the ass", while AirServer Universal runs pretty well on my two machines. So I could not understand why people are writing reviews like here, here) or the comment here). During  my tests I found out:

One thought was that it depends on the hardware I used. Especially my old Sony Vaio doesn't come with state of the art hardware (the GPU isn't Miracast capable, only the USB Wi-Fi adapter supports NDSI 6.4). But the Miracast certified hardware of my Akoya P2214T shows similar results.

Note: After I've published the German edition of this blog post, one of my Windows Insider MVPs left a comment. He has tested the Connect app on 3 Windows 10 machines. Only one machine was able to establish a Miracast connection on a random base, although all machines was specified for Miracast.

As I heard first of the Connection app (some months ago during testing an Insider Preview) I thought "Ups, Microsoft is going to kill the AirServer". But now I think AirServer is the only working solution I've seen. Especially the fact that AirServer is supporting protocols like AirPlay (Apple), Google Cast (Google's Chromecast) and also Miracast makes this solution more flexible. Also the reliability is much better. And it runs under Windows 8.1. I will publish a review of this software during the next days.

Notes: The German blog reader cited above has send me another feedback. He observed green stripes on his Windows 10 PC using AirServer. I've had such an effect during earlier tests on my Akoya S6214T under Windows 8.1 (see Windows 8.1 as a Miracast receiver (AirServer Universal 3.0.26)). The blog reader received the following statement from App Dynamic developers "Microsoft suddenly removed WFDDisplaySinkStart from WiFiDisplay.dll in the latest version of Windows 10 without deprecating it first. Miracast functionality in AirServer relies on this function which has been replaced by WFDDisplaySinkStartEx and so far Microsoft has not replied with any documentation on how to solve this issue." The developers recommend to use Google Cast instead of Miracast.

Just a last remark: I don't have a business relation with App Dynamic, but the Icelandic company granted a free test license for AirServer 3.0.26 last year. And I've exchanged my Miracast opinions with App Dynamic developers from time to time during the last months. As a conclusion of many tests, I would quote "The industry and the Miracast consortium messed it up pretty well. Whilst AirPlay and Google Cast just works, Miracast is causing always serious trouble. But Apple also messed AirPlay, because they changed the protocol in iOS 9, so many older receivers are broken. Only Apples newer hardware and AirServer received an update to run AirPlay on iOS 9 and above." So at the end of the day, using a HDMI cable to mirror a screen is the cheaper and working solution.