[German]In part 1 I've shown, how to activate the Windows build-in account "Administrator" using registry editor within Windows PE. In case that doesn't fit, you can also use the approach discussed below, to activate the administrator account and repair Windows.

Again: This 'how to' shall work in Windows 7, Windows 8.1 and Windows 10 (and its corresponding Server versions).

Note: This is not a guide to hack third party computer systems, because this is illegal. I won't introduce password cracker therefor. The how to is just a "last resort to avoid a Windows re-install, in case admin rights are lost".

If the registry hack shown in part 1 is to complicated, use the steps outlined below to activate the build-in Administrator account.

1. Boot your machine with Windows RE (use a setup DVD or a system repair disk) and open command prompt window (see).

2. Rename the files cmd.exe and magnify.exe within the command prompt windows using the command given below.

The only difficulty is to locate the logical drive for your Windows installation. Drive X: is the RAM disk with Windows PE. I invoke Windows editor using the command notepad.exe. Then I I select File – Open and use the Open dialog box as a mini file manager to identify my Windows drive number.

After I know the drive letter for Windows, I use the following command within my command prompt window:

The letter C: stands here for the Windows drive. The we can use the following commands within the command prompt window, to rename cmd.exe and magnify.exe.

The command sequence exchange magnifier with Windows command processor cmd.exe. Then you can remove the boot media and restart the machine, to boot Windows again.

In case of doubt, the steps are also discussed for Windows 7 at sevenforums.com within this tutorial. The trick works also in Windows 8, 8.1 and 10.

After booting Windows successful, it's mandatory, to enable the build-in Administrator account. 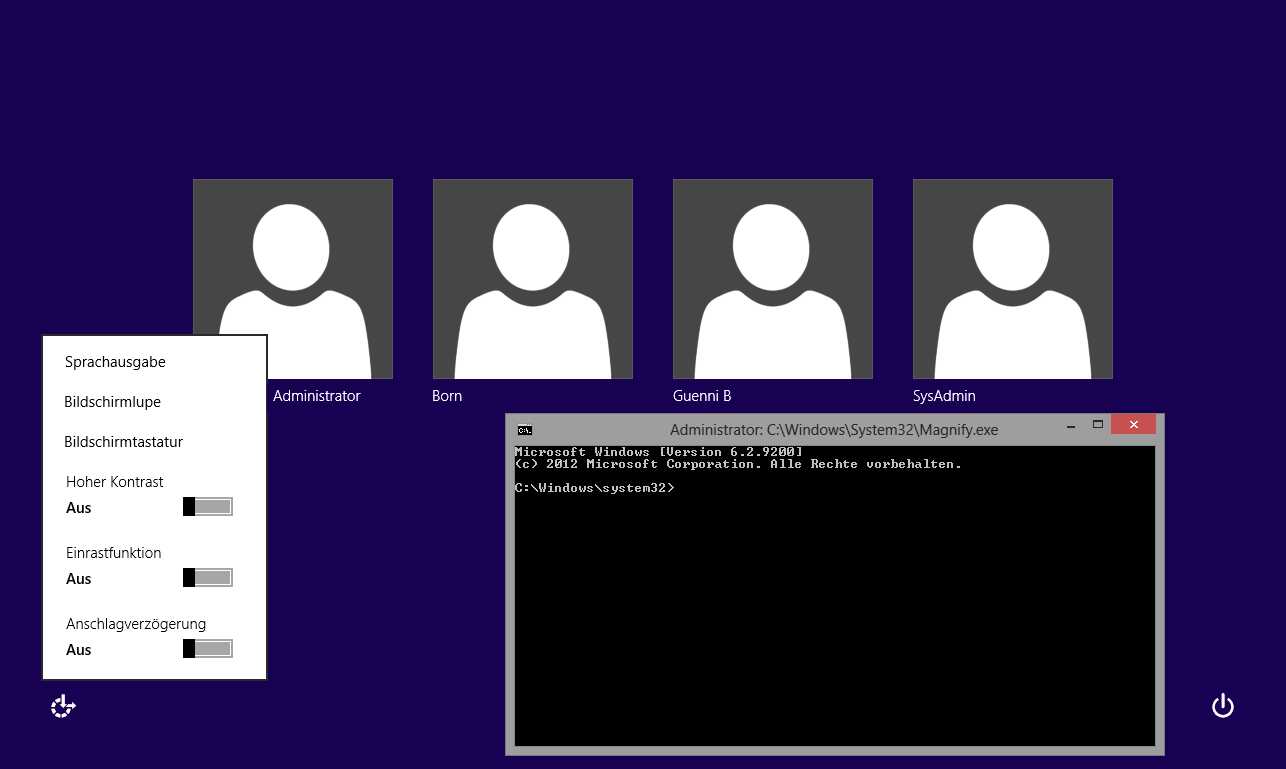 3. Now enter the commands given below to activate the build-in Administrator account:

This command disables the build-in account Administrator. Then boot again into Windows PE, open command prompt windows and exchange the files cmd.exe and magnifier.exe using the commands below.

Again C stands for the Windows system drive. After renaming both files in a proper order, the Accessibility menu command Magnifier should launch the magnifier again. Remove the boot media, reboot the machine and test, whether your repair was successful.

Tomorrow I will cover an issue, where Windows reports a file system error (-1073741819) and UAC doesn't work anymore.

This entry was posted in Windows and tagged administrator, Tip, Windows. Bookmark the permalink.