Windows 10 Creators Update is causing a mysterious error on some machines. After upgrading to Windows 10 Version 1703 or after a clean install, activation, updates and store downloads fails with error 0x80070057.

Error 0x80070057 stands for ERROR_INVALID_PARAMETER and has been discussed within several blog posts. A blog reader pointed me recently to a German Microsoft Answers forum thread, A user was facing serious trouble after upgrading to Windows 10 Creators Update. It seems that Windows Update was broken in build 15063.138. Each update install ended with error 0x80070057.

In normal cases it's a good idea to repair Windows Update store using the update trouble shooter (see also). But this attempt wasn't successful at all. 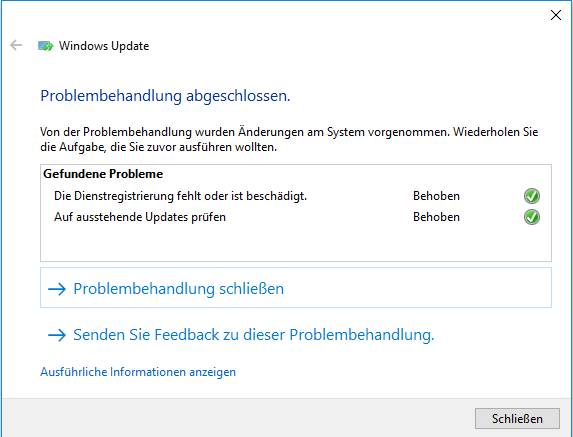 The troubleshooter reports some fixes (see screenshot above). But no success to fix error 0x80070057.

A known issue on INTEL NUCs

If this error occurs on INTEL NUCs, it's a knows issue. The case has been discussed for Windows 10 Insider Previews within this Microsoft Answers forum thread.

The user tried to do a clean install of Windows 10 Creators, but failed to activate Windows 10 V1703. Windows returned also error code 0x80070057. I've seen a similar error here. After going back to Windows 10 Anniversary Update, the issue was solved. The user wrote, that the issue was detected on a Intel NUC 5i5RYH.

It seems, that Intel NUCs doesn't have a serial number within its BIOS, so Windows activation fails. A user describes some steps to fix this issue. Currently it seems we have the following situation with INTEL NUCs.