The updates released from Microsoft end of November 2017 brought some bad surprises for administrators. And users are facing also issues with those updates. Here are a few details.

I received a German comment claiming issues with Windows Fax and Scan:

Some OT: I guess, the issue has been there since the last update:
Do any of you still use PC faxing with Windows Fax and Scan?

With the current Windows something has been broken. Faxing is still possible, but the feedback from the modem in case of problems is no longer evaluated correctly.

Previously, messages such as "busy" or "no call acceptance" were sent back, which could be useful. Now only "unexpected error" appears as Explorer message or "serious error" in the fax program as extended status.

This unspecific error has also occurred before, but only if there was a problem somewhere during the transmission of the fax, so that the process is not complete.

I think the problem occurred with the dot-matrix printer problem and was not fixed with the current update. I'm afraid there aren't enough users to do the faxing.

Administrators rolling out updates via the Windows Server Update Service (WSUS) running in issues for days. Updates KB4011618 (for Office 2010) and KB4014461414 (for Office 2007) appeared up to 80 times in the list of available updates. Blog reader Harald L. has left a comment:

There are many "Security Update for Microsoft Office 2010 (KB4011618)" in WSUS today, which appears 37x in 32bit and 37x in 64bit with identical description and KB number. There are 4 copies that replace another update, the rest are not. Then the same with a "Security Update for Microsoft Office 2007 suites (KB4011604)" appears 38x and only 2 copies replace another update, the others not.

I received other comments within my blog confirming this issue. Blog reader Torsten wrote:

KB4011618 also showed up in WSUS ~80x. If you look at the files, the update was published separately per language.

The whole thing is probably sailing under 'Multiple Instances Of An Update', just as a hint for the forum search. 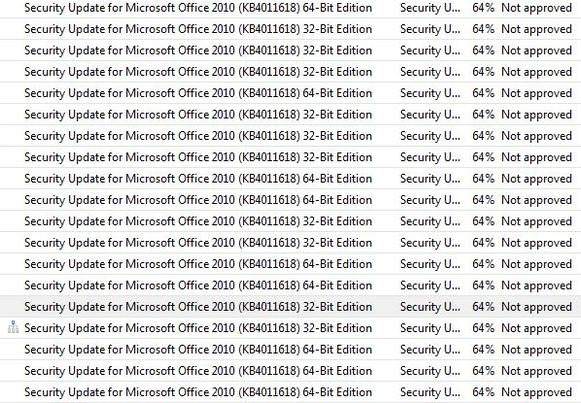 Woody Leonhard published this post linking to a Spiceworks forum entry (here is the forum post at Askwoody). User AB2000 has published the screenshot shown above.

Rollup Update KB4048957 seems to crash Internet Explorer 11 on several users. This is the conclusion form this post from Woody Leonhard.

Have you heard of or seen an issue with Internet Explorer 11 crashing when the cumulative update for the Win 7 OS KB4048957 is installed? (not the IE patch mind you – the OS cumulative patch. Weird right?)

We are seeing this on some Windows 7 x64 machines. Uninstalling the patch appears to resolve this as an interim fix. (Obviously not a long term fix as the patch is cumulative – but helpful workaround to buy time for now.)

Initial indicators with a case we have open with Microsoft indicates if a registry key is removed this also fixes it (ironically, the removal also causes other issues so not a vector for the fix)

Further details about the background of this issue may be found within my blog post Internet Explorer 11 crashes after installing updates?

One of these November updates also breaks indexing in outlook when using G Suite. Not sure which one specifically. Only fix I found was a system restore before these updates.
Using Windows 7 64 bit and Outlook 2010 32 bit.