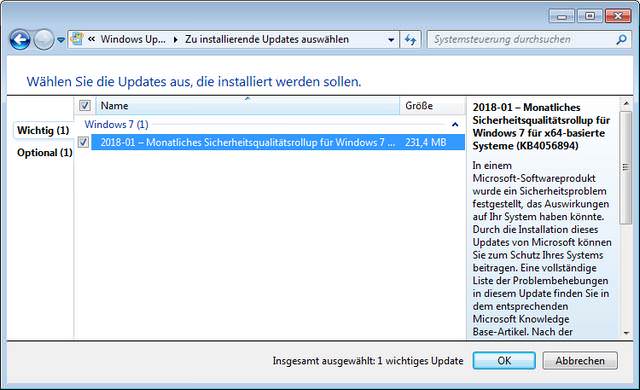 Maybe Microsoft has brought the update forward and waived the emergency patch from the day before (which was not offered to me). The description refers to the fact that a security problem has been detected and indicates the following changes:

But these are the same changes that update KB4056897 (Security-only update) lists. Whether further improvements have been made in the rollup is not specified. Also for this update, the topic Virus scanner including registry entry is also included as issue (see Microsoft’s kb article).

There are two known errors with this update: When CoInitializeSecurity is called, the call fails if RPC_C_IMP_LEVEL_NONE is passed under certain conditions. Microsoft is working on this problem, but has no solution yet.

Please also note that this update is only available if the installed antivirus solution has been customized by the vendor and the registry entry specified in the kb article has been set. Also note that the package (opposite the KB-description) is currently not available in the Microsoft Update Catalog (the link is broken).