Microsoft: Most customers will use Windows 10 S mode

[German]With Windows 10 Version 1803, every user will be able to use Windows 10 S mode on his systems. The question is: How many users will use it? Microsoft means 'the majority'.

Windows 10 S is a special configuration of Windows 10 Pro that is optimized for security and performance. Windows 10 S mode restricts a user to apps from the Windows Store. In addition, some pre-defined Windows applications (e. g. Explorer, Edge browser etc.) can be executed. 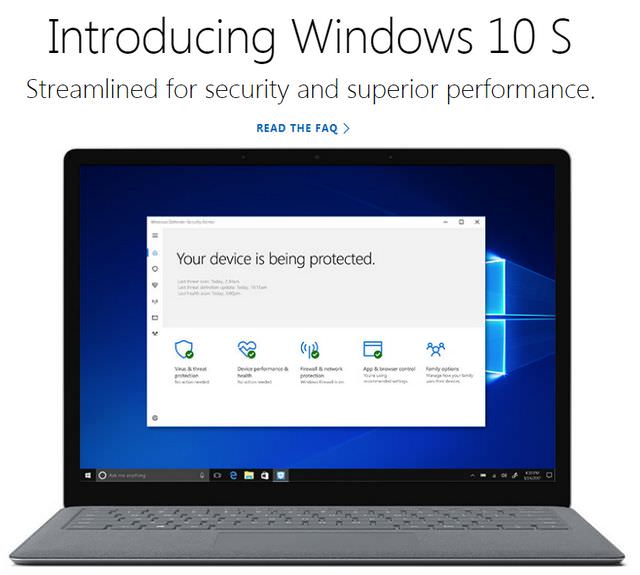 Microsoft advertises on this web site Windows 10 S as streamlined for security and superior performance. 'Microsoft-verified security' promise: Your applications are delivered via the Microsoft Store ensuring Microsoft-verified security and integrity. Microsoft Edge is your default browser since it's more secure than Chrome or Firefox (which is just marketing bull shit). An FAQ prayes all these marvelous things, you can do with Windows 10 S.

At the time of its introduction, Windows 10 S was offered as a separate sales version (SKU). However, owners of such a system can easily upgrade to Windows 10 Pro to take advantage of all the features of Windows 10. Up to now, the statement was that this change would be free of charge until March 2019, but would later cost around 50 Dollars.

How many users will keep Windows 10 S?

The main question is: How many users are willing to keep the preinstalled Windows 10 S mode, which restricts you to store apps, if switching to the' full version' is possible for free?Personally, I would have guessed that only a few people are keeping Windows 10 S. Mark Hachman from PCWorld has published recently the article Microsoft expects the 'majority of customers' to use Windows 10's S mode. Hachman teased on Twitter Microsoft with a statistic – Chromebooks, Windows and Apples iPad are used in education (in USA), but there is no mention of Windows 10 S.

No specific mention of Windows 10 S that I see. https://t.co/CwRWEx9JV9

The Windows 10 S propagated by Microsoft simply did not appear. In his response to the tweet, Belfiore confirmed that Windows 10 S will be a particular mode of Windows 10 systems in the future and that Microsoft believes, that the majority of users will keep this mode. Here are the beef from the PCWorld article, based on Joe Belfiore's statements.

BTW: In this context, we can interpret: Windows 10 might be an operating system with 'a lot of hassle' and probably slow boot time and slow performance, draining the laptop's battery – otherwise Belfiore's points doesn't makes sense.

This entry was posted in Windows and tagged Windows 10 S. Bookmark the permalink.

1 Response to Microsoft: Most customers will use Windows 10 S mode