[German]Users of Windows 10 may experience scanner issues after installing a Windows 10 update. For example, after an update to Windows 10 version 1803, scanning from multifunction printer/scanner devices is no longer possible using Easy Document Creator.

Within the text below I will try to explain the various approaches to control scanners and point out the associated problems.

With modern scanners connected to a computer via USB, the scanner is controlled from applications using two standards: Twain and WIA. Here is some background information.

TWAIN is is a standard established in 1992 by Aldus Corporation, Eastman-Kodak, Hewlett-Packard and Logitech for exchanging data between image input devices (scanners, digital cameras, etc.) and applications for Microsoft Windows and Apple Macintosh.

TWAIN 2.4, released December 15, 2015, consists of three elements: The data source, the application program and the source manager. The data source is formed by the scanner or digital camera driver. This must be supplied with the device in a version compatible with the Windows version or may be downloaded and installed at a later date from the manufacturer's website.

Then application programs such as PhotoFiltre etc. can be used to address the scanner directly and to continue using the image data of the scan. If this does not work, the device's TWAIN driver may no longer be compatible with the existing Windows version. Here you can only try to uninstall the manufacturer's Twain driver and reinstall a new driver or the old driver.

The WIA standard, approach with hurdles

This is the interface introduced by Microsoft from Windows Millennium (WIA stands for Windows Image Acquisition). Windows Fax and Scan as well as other functions of the operating system or application programs can use WIA to initiate a scan.

In order to run the scanner under Windows, a WIA driver of the scanner manufacturer suitable for this operating system must be installed. Unfortunately, there is a large hurdle for older scanners. Microsoft has introduced the WIA 1.0 standard for Windows Millennium and also supported it under Windows XP.

Starting with Windows Server 2003, Microsoft switched the model of the WIA service from Local System to Local Service. As a result, all older WIA drivers no longer work under newer Windows versions. This was first noticed on a wider front with Windows Vista, later with Windows 7 and subsequent versions.

I had explained this in more detail in my German blog post Scanner unter Windows 7.

Scanning via this interface is not possible without a WIA driver adapted to the currently used Windows version. The scanner is then simply dead. If there is no updated WIA driver, you can only try to scan via the TWAIN interface.

The software Vuescan, occasionally suggested, uses this interface according to my information.

Meanwhile there are a lot of multifunctional devices on the market, consisting of printer, fax and scanner including network connection. An elegant trick is actually used there: A network share is set up on a computer within the network, on which the scans can then be stored. The multifunction device is then set up to automatically store the scans as files on this network share.

Basically, you only need to configure the network address (URL) and the access data (user name and password). The concept is, because of the access to network shares, independent of the used operating system.

What looks ingenious in theory proves to be a great evil in practice. When searching the Internet, you very quickly come across calls for help in forums, claiming 'scan to network folders' no longer works after any update in Windows 10. The HP Forum contains several articles (German entry, some English hit is here about All-in-One printer series). At hardwareluxx there is an entry here. These postings are all in German, but you should be able to find other posts in English.

… and The SMBv1 problem

When scanning to a network share there are then the strangest error messages. Everything from error code 0x80004005 to other messages is included. Here it only helps to reactivate the SMBv1 protocol for test purposes under Windows 10.

I had outlined this some time ago in the German blog article Windows 10: Kein Zugriff auf Freigaben already in another context. 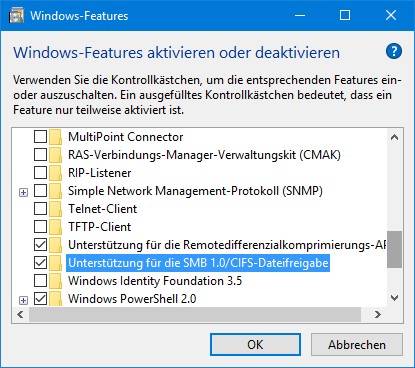 Once OK is confirmed, Windows must restart. When rebooting, SMBv1 is added to the operating system and scanning to network folders should work again.

Within this english blog post, you will find additional hints, such as how to set up an insecure logon using group policies. But I'm not sure if this still works or if it's a good idea. In the long term, devices that use SMBv2 for network access should be procured

After switching to Windows 10 April Update (version 1803), the forums have seen a series of users who can no longer scan multifunction devices. The common feature is that Samsung Easy Document Creator is used for scanning. I have received requests from Facebook, Microsoft Answers etc.

Scanning with Samsung Easy Document Creator is described in more detail on this HP page (German) or here (English), for example. Windows 10 and Samsung Easy Document Creator, now offered by HP, have been a source of trouble in the past. During the "Scan to PC", messages such as'The current process has failed' were displayed.  Or an error message like the following will be displayed. 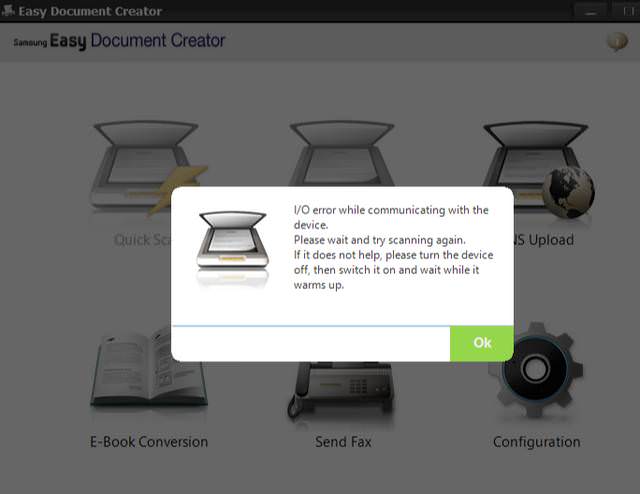 For example, the HP forum now contains the thread After upgrade Win 10 v 1803 Easy Document Creator won't comunicate with scanner from early May 2018, which describes the dilemma. The Windows 10 April update knocked out the software, the scanning doesn't work anymore. Even the TWAIN interface is disabled. In this MS Answers forum post, a user reports that scanning with Windows Fax and Scan still works (WIA is used).

A workaround is to use the software NAPS2 (Not Another PDF Scanner 2)) for scanning. This software can scan via TWAIN and WIA. I haven't found anything at the moment, but Easy Document Creator might try to use the SMBv1 protocols for writing – and that goes wrong for the known reasons.

A blog reader posted a comment below, informing, that HP / Samsung has released a hotfix for Windows 10 V1803 for the All-in-on printer I/O error. The comment below contains a WeTransfer URL that vanishes in a few days. I found two sources for a possible download:

I briefly checked both downloads – the files are signed by HP (until May 30, 2018). However, I can't test if the hotfixes enables the scanner.

It seems, that users of Epson scanners are also affected after upgrading to Windows 10 V1803. A workaround that helps (see):

It's not the best solution, to run the EPSON Scan Utility with administrative credentials. It's probably possible to use a graphic program with Twain support for scan, until Epson provides a fix.