CCleaner 5.45 pulled and other peculiarities

[German]A brief information for CCleaner users. AVAST/Piriform have withdrawn the latest version 5.45 of CCleaner. There was a lot of negative user feedback about V5.45 and it's telemetry. Based on a user's tip, I did a little research – and found some other things that are very strange (if I'm not completely wrong). Note: I've documented some things with screenshot, that may be found within my German blog post.

Background: What has happened?

Security provider AVAST owns Piriform, and Piriform has released version 5.45 of the CCleaner a few days ago. Piriform has upgraded the telemetry data acquisition in this new version. Users cannot simply deactivate the functions (only via workarounds). This caused a lot of user critics and triggered lot of negative reports on the web. I reported on the topic in my post AVAST CCleaner 5.45 and the telemetry thing.

Piriform had promised to add an option to disable the telemetry data acquisitionin the coming versions. But user feedback was not overwhelming, some suggested to pull version 5.45. Now a developer from Piriform posted the following text in the Piriform forum.

Thank you all for your continued feedback (positive and negative, it all helps). I wanted to give a quick progress update on what we're doing. We're currently working on separating out cleaning functionality from analytics reporting and offering more user control options which will be remembered when CCleaner is closed. We're also creating a factsheet to share which will outline the data we collect, for which purposes and how it is processed.

Today we have removed v5.45 and reverted to v5.44 as the main download for CCleaner while we work on a new version with several key improvements. You can grab version 5.44 from one of the links below:

CCleaner V5.45 has simply been withdrawn and the previous version 5.44 is offered for download again. Here are the official link.

I know that some people swear by the tool – I still recommend not to use it.

My remarks: Strange is an understatement!

And another thing – one of my blog readers had pointed out something very strange to me sometimes in 2017 in a private message on Facebook (which I never recognized, and that strangely enough just popped up these days, among other 7 private messages, I've neveer seen before). I then started s research and checked the information.

Piriform belongs to antivirus vendor AVAST. But has you noticed that their websites like CCleaner.com doesn't contain address information – at least at a prominent place, like the site's footer? No imprint, just a reference to a Piriform Ltd. from which CCleaner, Defraggler (also such a Windows killer) and more come. It is a Limited company founded under British law (offices are listed here, which I only found via Google). 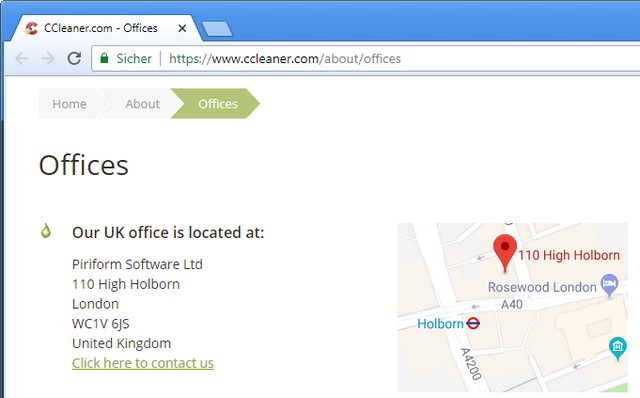 Note: Searching the web, I found the Office page, shown within the above screenshot, where Piriform Software Ltd. says, it resided at 110 High Holborn, London, WC1V 6JS. A German blog reader informed me, that the page Terms of Use mentions another office address: 163 Eversholt Street, London, NW1. A 3rd (see the image below). 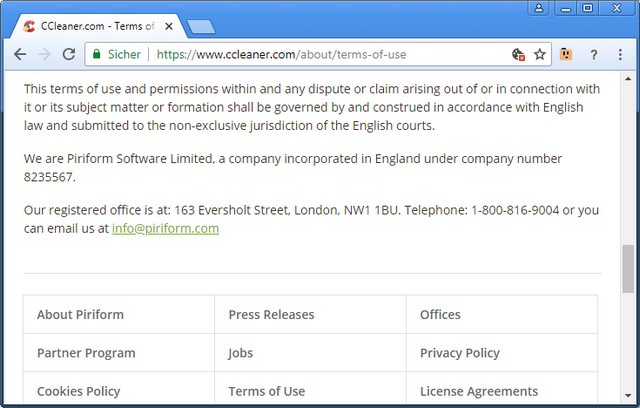 The 'About Piriform' link shown above opens a page, where (currently) no address is offered. This is a no go in Germany, and a serious company should not act in that way, even if it's located in Britain. The tipster wrote, that this is suspicious. Why should someone do such an effort to bring a free software 'anonymously' to people? He had asked Pirifom for the address (probably before the sale to AVAST), but did not get it. Quote of the user:

I could not find a proper imprint, as it should be for every professionally acting company. All they write is "Piriform is located in the heart of London's West End."  My email request for identity was ignored. Requests to their support forum are dismissed with "We have the right to remain anonymous" and the posts are deleted shortly afterwards.

Well, I've documented above, that Piriform has now published some Office addresses, but scattered over it's web site. The tipster found this quite strange and started a research, because you need to trust a software (and it's vender) that you install on your system. The user described its findings as follows:

The websites "ccleaner.com" and "piriform.com" are registered with GoDaddy. Normally the address of the owner is listed in the registrars data set.

The owner of site CCleaner has registered the Internet pages with the help of the provider http://domainsbyproxy.com/, who disguises the identity for an extra charge. I wonder why they spend so much money just to distribute a freeware anonymously?

Just for the records: I received the tip in the 2nd half of 2017. Today (August 2018) I checked that – the domain is still registered via domainsbyproxy.com, no real owner is visible (even Piriform is now owned by antivirus vendor AVAST). 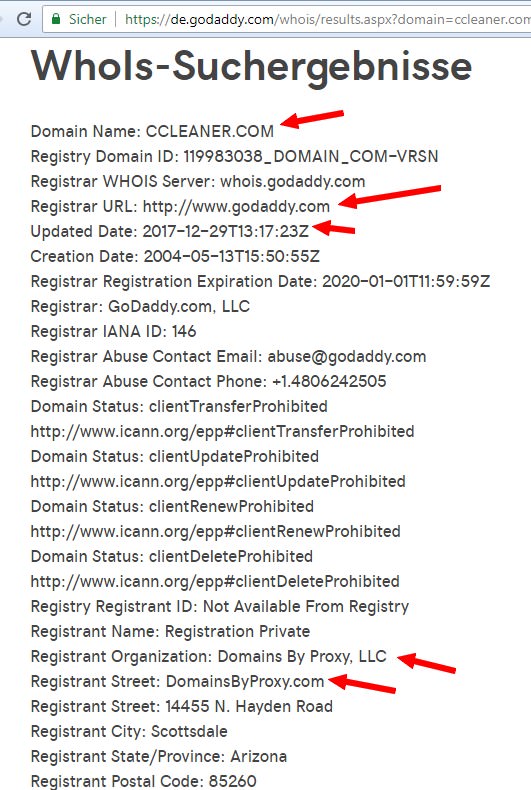 Why? The tipster did a further investigation, and found out more. He wrote:

The manufacturer trades under the name "Piriform Ltd", an English company which can be searched in the official English company register:  http://www.companieshouse.gov.uk/info

I tried to check that. The old address "17 CAVENDISH SQUARE, W1G 0PH, London, UK" (which is no longer valuable) leads to a provider for letterbox companies (the URL argyllbusinesscentres.com now redirects to leo.co.uk, where you can rent virtual offices – or establish mailbox companies in English).

Currently Piriform's official mailbox address (obtained from he official English company register) is '110 High Holborn, London, England, WC1V 6JS'. This is also the address, where AVAST PLC is registered. According to Google Maps this is a (small?) house, which is currently (Google claims) for sale (but that doen't matter too much in this case). 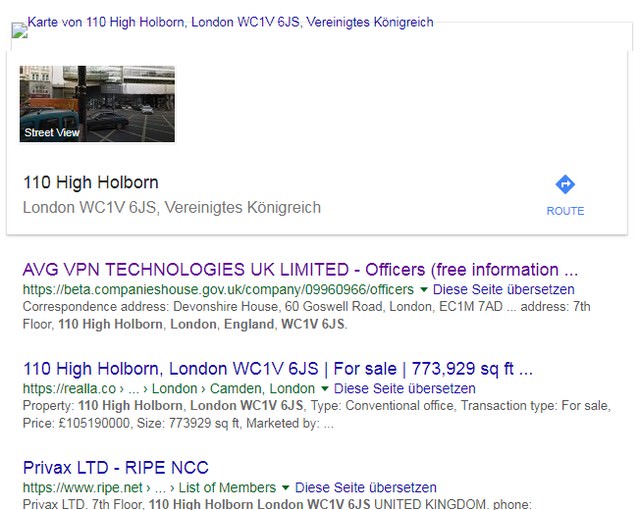 I entered this address on beta.companieshouse.gov.uk, and got more than 37,000 hits with entries from managers of dozens of companies like AVAST, AVG & Co. residing there. 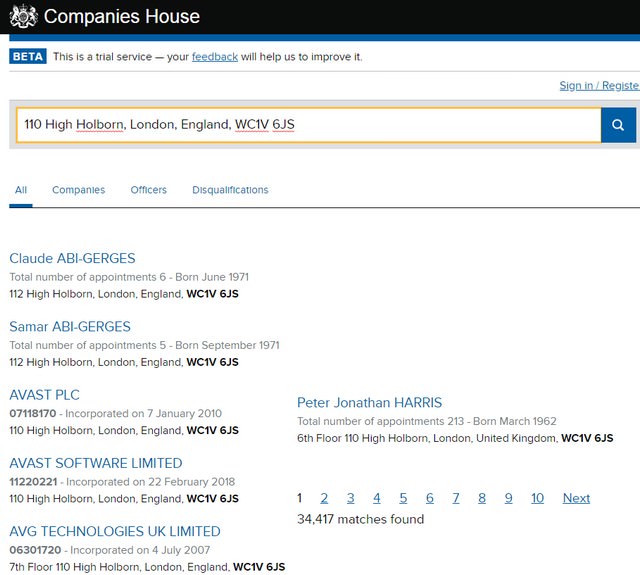 This is their postal address – there must be a lot of people in this little house ;-). My assumption: It's a letter box address, where these companies are registered, but no one will have an office there. I didn't understand the reason, because Piriform Ltd. has other office locations in office buildings in London. Or to put it in another way: If I didn't make a mistake, I came across serveral addresses, none is shown prominent on Piriform's website, and one seems to be a letterbox address. At best it's just confusing.

It may be that everything is quite harmless (and there might be reasons behind this behavior), and maybe tomorrow all the above information will be changed in a consistent and professional way, and you will come across a proper imprint/about us page with a valid address. But I wonder what this is all about – since AVAST is the owner of Piriform?

Everybody should ask itself the question: Do I trust and install a tool, even if it's free, from a vendor, acting in this way, on my system? A tool that can access all my information on Windows? In best case, the address confusion on Piriform's website is just not professional – but what's in worst case? I still can't give an answer. But, if you're still worried about telemetry in CCleaner v5.45 and intend to go back to v5.44, you probably should rethink your whole using that tool decision?

This entry was posted in issue, Security. Bookmark the permalink.

1 Response to CCleaner 5.45 pulled and other peculiarities