[German]Microsoft has not too much luck with its Office updates released in November 2018. Two non security updates has been pulled, and a security update causes Outlook 2010 to crash.

Woody Leonhard already pointed out shortly after the release of the update via Twitter that there are reports about crashes with Outlook 2010.

I’m seeing reports that KB 4461529, this month’s Outlook 2010 security update, is crashing on startup. Remove the KB and Outlook works as expected. https://t.co/9LdI83lvMh

Microsoft has included now a note in the list of known issues, mentions crashes in Outlook 2010, caused by this update:

After you install the 64-bit version of this security update, Outlook may crash on start-up.

After installing the 64-bit version of this update, Outlook 2010 may crash at startup. Microsoft is investigating the issue and will release more information in time. Currently, the only workaround is to uninstall this security update if you are affected by the crashes. However, I estimate that most users work with the 32-bit version of Outlook 2010, so they are not affected. I also received feedback from German readers, that crashes has been observed only under Windows 10 V1803.

Update KB4461522 for Microsoft Office 2010 SP 2, dated November 6, 2018, is not security relevant. It is intended to make improvements to the Japanese calendar in Office 2010 so that Japanese names are displayed correctly in a new era. 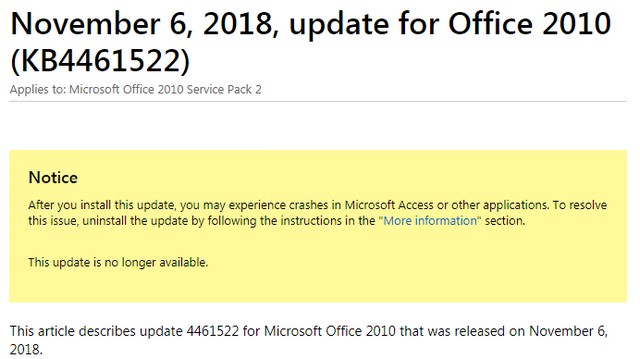 Within the KB article, Microsoft now writes that this update can cause crashes in Microsoft Access and other applications. The only option is to uninstall this update. Microsoft has officially withdrawn the update.

❗️Please note that this update #KB4461522 causes an error (Entry Point Not Found: The procedure entry point GetDateFormatEx could not be located in the dynamic link library KERNEL32.dll) when you run Office 2010 – 32-Bit, Word, Excel, and others appl when working with Windows XP. pic.twitter.com/Gx7iO8wwuY

WZor reported on Twitter (see tweet above) that the update causes an error in the library KERNEL32.dll when calling the GetDateFormatEx() procedure.

Update KB2863821 for Microsoft Office 2010 SP2 also makes adjustments to the Japanese calendar to ensure that Japanese names are displayed correctly in a new era. This update is required for update KB4461522, but it is cauing also crashes in Microsoft Access or other apps. So uninstall this update, which has also been pulled by Microsoft. (via)