A German reader left this comment, mentions this update. I checked JAVA within the control panel and let it search for updates. Under Windows 7 SP1, the JAVA Updater displayed a notification in the taskbar and reported the update. Subsequently, the update to Java 8 Update 201 was offered and installed on request.

After successful installation, a dialog box was presented, indicating upcoming changes. From the end of 2020, Java 8 will no longer be updated. For enterprise customers, a commercial license will be required for updates from January 2019, according the the change notes. 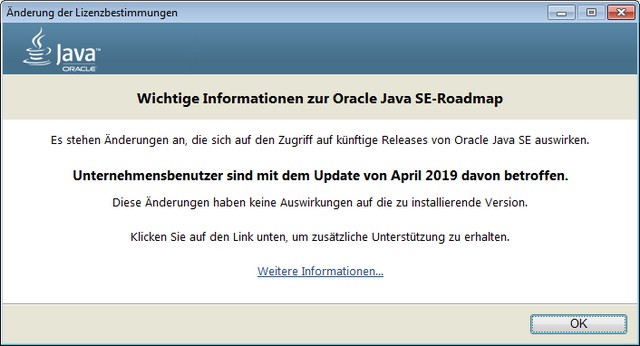 However, Oracle does not agree here, because while the page here still indicates January 2019 as the date from which a license is needed in companies, the above dialogue bod claims that company users will only be affected from April 2019.

The various Java packages can be downloaded from this Oracle website (or here). The bug fixes for Java 8 Version 201 are available here.

Attention: If you use the JAVA-Updater or the Online-Installer, please make sure that no Adware is installed. Therefore I use the Offline-Installer.

Question whether Java should be uninstalled

During writing this text, blog reader Thomas B. send me the following information by mail:

today I noticed … with my two devices, which I use as a media center, that a message came up during an upcoming Java update, that Java has not been used for more than six months and if I want to uninstall it. I didn’t trigger that now, because who knows what will happen if I want to reinstall it because of the changed license conditions for Java …. ;-)

Also the colleague at deskmodder.de mentions something like this here. I don’t get this message because I occasionally start the Android Debug Monitor (ADB).

It already mention it above: Oracle forced companies to obtain a corporate license for commercial environments to get updates. And by the end of 2020, Java 8 updates will reaching end of life. A long time ago I had the article Oracle: Have you to pay a Fee for Java SE from 2019 onward? on the subject.

Blog reader Martin Feuerstein had already pointed out to me in mid-November 2018 that Amazon wanted to offer a Java 8 runtime environment for free (had already read that within the web). Martin wrote:

An MSI package is available for Windows. After the installation java.exe -version reports as 64-bit version. The installer does not (yet) register any environment variable/path.

The project is called Amazon Corretto and will be available for Amazon Linux 2, Windows and macOS for free. The downloads are available at this Amazon site (currently as previews for Windows).

This entry was posted in Security, Software, Update and tagged JAVA, Security, Update. Bookmark the permalink.