Windows 10 Network bug in all versions, fix are planned

[German]Microsoft's January 2019 updates are causing a network issue in all supported Windows 10 versions. A patch to correct the problem is expected in February 2019 or later. Here is some information about what is going on.

I confess, I wasn't really aware of this issue, because I didn't notice the real thing, when I first read this German comment on my German article Windows 7: Updates KB4480970 und KB4480960 verursachen Netzwerkprobleme published at German site heise.de. The user reported an 'exotic flaw' (here is my translation):

After the installation of the security updates 2019-01 (KB4480116) the Telekom Router (Speedport 925) could no longer be reached. After deinstallation, the Speedport router could be reached [within the browser] without problems as usual.

Some other German users mentioned DHCP issues within this forum thread. They recommended to assign a fixed IP address as a workaround. I haven't tested this (because I'm not affected, currently my Windows 10 V1809 test machine can't connect to Microsof's update servers). Then I came across the mentions here and here by chance and started to consult Microsoft's kb articles for all Windows 10 updates from January 2019.

Nearly all Windows 10 builds are affected

On January 17, 2019, Microsoft has updated the KB articles that describe the January 8, and January 15, 2019 updates for Windows 10. It affects the following patches:

Within the kb articles mentioned above, Microsoft added (probably at January 17, 2019) the following 'known issue'.

After installing KB4480116, some users report that they cannot load a webpage in Microsoft Edge using a local IP address. Browsing fails or the webpage may become unresponsive.

The above KB number belongs to the article for Windows 10 V1809 update and changes depending on the Windows 10 version.

Microsoft proposes the following steps as a workaround to enable access to local sites in Edge browser.

2. On the Security tab, select the Trusted Sites icon and click the Sites button. 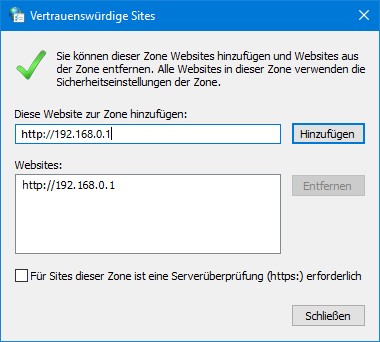 3. Clear the check box for Require server verification (https:) for all sites in this zone.

5. Select again the checkbox Require server verification (https:) for all sites in this zone, then confirm the Close button.

Then click the OK button to close the property page and restart Microsoft Edge. Afterward the local websites should be reachable within Microsoft Edge. Microsoft is working on a resolution and will provide an update in an upcoming release.

This entry was posted in issue, Update and tagged issue, Network, Update, Windows 10. Bookmark the permalink.

3 Responses to Windows 10 Network bug in all versions, fix are planned