[German]Today Microsoft reported that the major outage of Office365.com last week was fixed. But now Microsoft 365-/Office365.com users can no longer access safe links in emails. And outages of Azure, Outlook, Skype etc. are also floating in.

On 24 January 2019, there was a major outage of Exchange Online, a service provided by Office365.com. I had reported that within my blog post Office 365 down (January 24, 2019)? The incident also continued on Saturday (see Office365 outage: a status update (01/26/2019)). Yesterday Microsoft posted a message on Twitter that they had distributed a patch on their Exchange online servers and telemetry said the problem had been fixed. 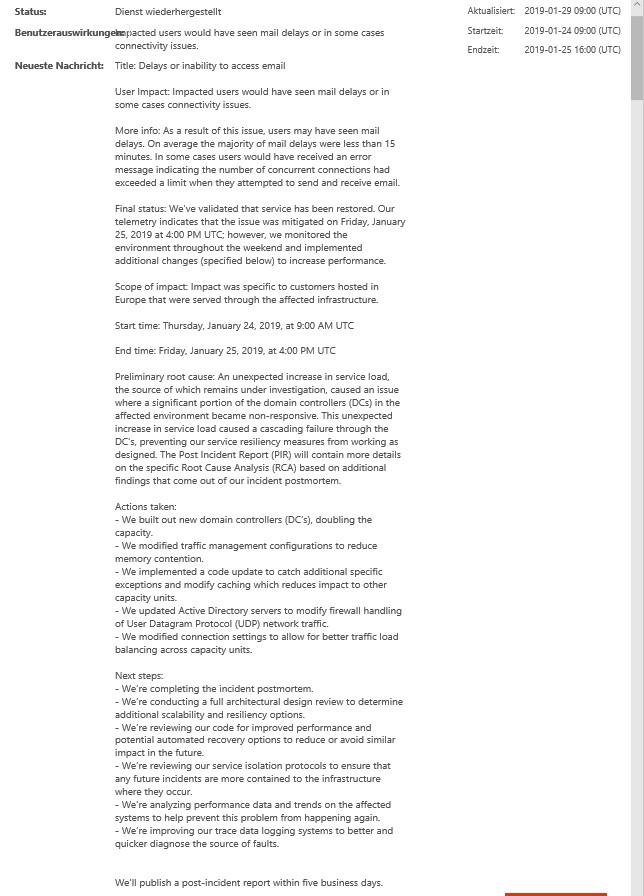 German blog reader Georg D. sent me the above screenshot a few hours ago. Microsoft states in the Office365.com admin area that the problem has been fixed. At the same time they provided some explanations what they did to fix it (new DCs, code update, new traffic management etc.). They intend to submit a post-incident report within 5 days.

Now Links in Mails are broken and more

If it was first bad luck, now the luck is gone. Users are facing now issues with Microsoft 365, the subscription that bundles Office 365, Windows 10 and Enterprise Mobility + Security products. On Twitter and on the Internet there are more and more reports that there are massive disruptions at Microsoft 365.

We're investigating an issue where some users are unable to access URLs from emails.

At Twitter (see the above tweet), Microsoft confirms that it is investigating a malfunction. Some users apparently can't click URLs in emails to open the target in the browser. Susan Bradley writes at askwoody.com that there are safe links in mails that cause problems. Bleeping computer has a few details: When selecting a link, an error 503 is returned.

This led to the conclusion that the problem may be due to the ATP Safe Links feature. Safe Links means that the web addresses (URLs) in email messages are scanned for dangerous link targets in real time by Microsoft's Advanced Thread Protection (ATP) when pointing / clicking on the link. However, this option is probably only available for Microsoft 365 Enterprise/Education in the E5/A5 subscription plans (see this discussion).

Odd thing I noticed is if I take the na01. portion off the URL and ignore the SSL cert error, then it loads… What the hell is going on with O365 as of late?!

A user specifies in the above tweet that the URL will be loaded if he removes the na01 part in the URL. Pretty crude, but hits a lot of users.

Tip: There is a possibility to convert the blocked safe links. Visit the website http://www.o365atp.com/, paste the blocked link from your email into the form. The converted URL should work . 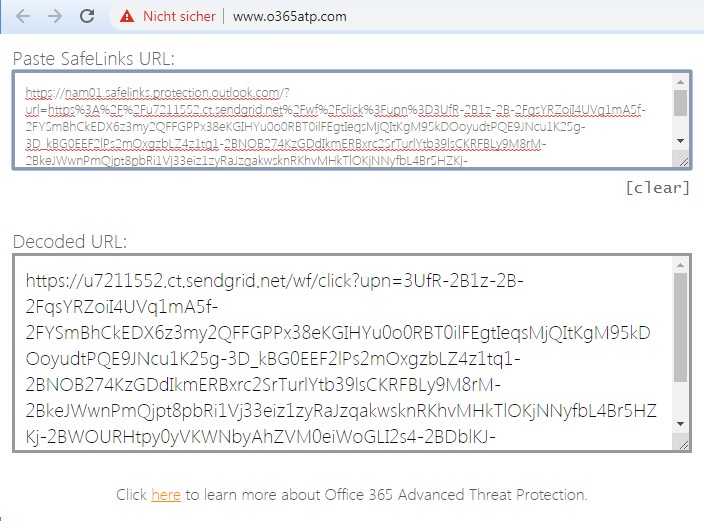 At downdetector.com and the German-language counterpart allestörungen.de the error reports are floating in. 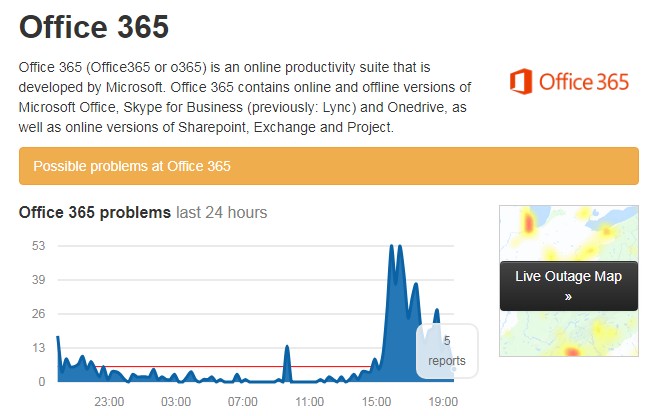 If you manage to retrieve a map from downdetector.com, you should see the following picture. The disturbance affects Europe, but also other parts of the world and parts of the USA (currently 11:48 p.m. German time) I see major outages on the east of Australia and on the west coast of the USA.

Since 11:00 p.m. (German time) there are worldwide reports and user comments, that Outlook connection attempts fail, the two-factor authentication (TFA) does not work or Skype for Business is down (confirmed at downdetector.com). At about 11:00 German time there is a peak with over 3,000 error reports. And an entry says:

Office 365 is having issues since 10:37 AM EST. Are you also affected? Leave a message in the comments.

The downdetector.com archive reports for 01/29/2019 also outages for Azure, Outlook, OneDrive, Sharepoint Online, Exchange Online and Skype. On Twitter a user writes, that Microsoft displays the case #Ex172674 in the dashboard of Microsoft365 without ETA (estimated time of arrival). But I can't verify that. askwoody.com Susan Bradley writes now: The fix is rolling out now. Any of you affected?

This entry was posted in issue, Office and tagged issue, Mail, Microsoft 365, Office365.com. Bookmark the permalink.