[German]In Windows 10 V1903, Windows Defender receives tamper protection. Here are a few details, what this is and how it affects administrators in enterprise environments.

Microsoft has just introduced Windows Defender Tamper Protection again and released some more details (I became aware about the new article via).

What is Defender Tamper Protection? 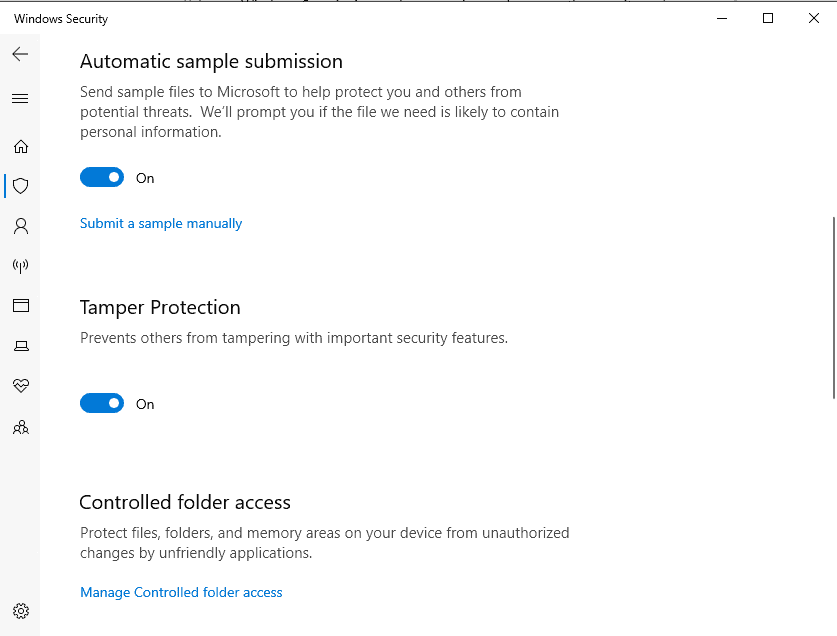 Also this tensforum post discusses the question of how to switch this function on or off. Microsoft has published in Feb. 2019 the article Prevent changes to security settings with Tamper Protection. They wrote about Windows 10:

Tamper Protection in Windows Security helps prevent malicious apps from changing important Windows Defender Antivirus settings, including real-time protection and cloud-delivered protection. If Tamper Protection is turned on and you're an administrator on your computer, you can still change these settings in the Windows Security app. However, other apps can't change these settings.

Tamper protection is a new setting available in the Windows Security app which provides additional protections against changes to key security features, including limiting changes that are not made directly through the app.

Then Eric Avena describes, who can switch the Tamper Protection status and what's the default settings: Enabling this feature prevents other (including malicious applications) important protection features such as:

The feature also prevents Security Intelligence updates from being deleted and the entire anti-malware solution from being deactivated. The feature is currently undergoing a limited preview test. Microsoft writes that the feature is supported by the current Windows Insider Build from March 2019 or later published builds. If you want to test the function, you can contact Microsoft via the Feedback Hub.

German blog reader David Xanatos informed me a few days ago about an observation with Tamper Protection. David wrote:

The problem is that as long as [Tamper Protection] is active, it seems that it is not possible to turn off Windows Defender via GPO.

David used the GPO "Turn Off Windows Defender Antivirus". Maybe Microsoft provides another GPO to turn off Tamper Protection, so Windows Defender GPOs are working again. The Microsoft blog post doesn't answers these questions – so let's wait what the final of Windows 10 V1903 brings within this area. Administrators should keep an eye on this feature.

This entry was posted in Security, Windows and tagged Windows Defender. Bookmark the permalink.