[German]Brief  information about an update install issue hitting Windows 10 (and Windows 7) users due to ‘missing’ current Servicing Stack Update (SSU). A user has now (finally) brought up the topic to Microsoft via UserVoice of the Configuration Manager (SCCM).

What is the SSU problem about?

Microsoft requires for Windows 10 (and also for Windows 7, but oddly enough not for Windows 8.1) both for clients and for server counterparts that the ‘latest’ Servicing Stack Update (SSU) must always be installed to install updates.

With these SSUs, Microsoft patches the rather broken Servicing Stack of Windows Update client almost every month. If people ignore this, the worst update installation errors occur. This is all well known.

I have discussed the above topic frequently enough in my blog. But that would only be an issue when manually installing updates if people download the packages from the Microsoft Update Catalog and then install them separately. Then the current SSU has to be installed first and everything is in the green area.

The current SSUs is available, but install fails

With automatic updates, that wouldn’t be an issue if the stuff worked. After all, Microsoft provides the latest Servicings Stack Updates (SSU) for the respective Windows versions on its update servers. Windows Update only needs to grab the SSU first, install it and can then process the remaining updates.

Within my blogs I got many user feedback, where exactly that didn’t work out. With Windows 10, the typical error pattern is that the updates are installed automatically. A restart occurs and then the user notices during the update process that an error has been reported. The update is then installed again, which now works because the current SSU is now installed.

The problem is that the sequencing of the update order for the installation does not work – in other words, it is simply broken. On WSUS or in the System Center Configuration Manager (SCCM), administrators have to make sure that updates are not released until the current SSUs have been installed. With Windows Auto-Update, however, the user has no influence on how the updates arrive for Windows 10.

I have now become aware through the above tweet that Jesse Schauer from the environment of SCCM users had enough. He has now posted the issue description on uservoice.com of the (SCCM) Configuration Manager. 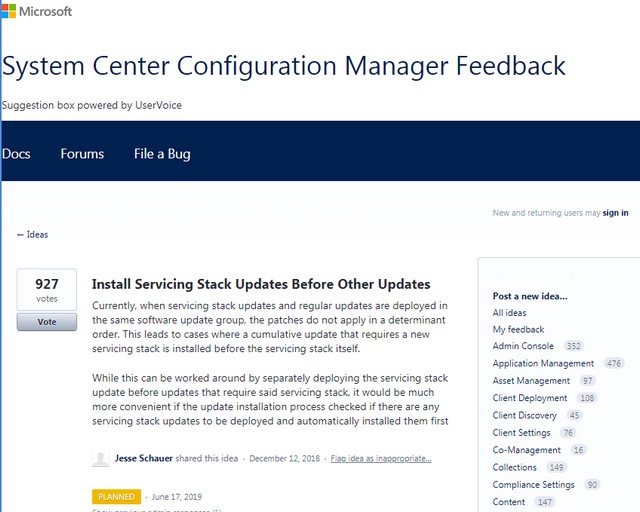 Those who are active in this area can ‘up vote’ the topic and comment on it. The comments are quite informative. Although: I think Microsoft knows exactly what’s wrong. They need to permanently patch the Servicing Stack, which indicates structural deficits to me and the order of the update installation doesn’t seem to be influenceable by meta files.