[German]Part 1 covers the topic that Windows 10 users who are still using older Windows 10 builds up to version 1803 have to expect a forced upgrade to Windows 10 May 2019 update. I have now run my own tests and would like to add some more insights and thoughts in part 2.

Background for this article are two things. First, I wrote an article for German news magazine heise, where I came about some insights. And I also took the the opportunity, to boot an old test machine, that hasn't been online with Window 10 for months, and see what happens.

The test machine is a Sony Vaio VGN-SZ2M_B, which was originally shipped with Windows XP, and then ran with Windows 7. I had run also Linux tests on the system before. And in March 2016, when I was still having fun with Windows 10, there was also an attempt to install this operating system (version 1511) on that system.

It was quite a struggling task, installing Windows 10 (I remember that it was an Enterprise edition), because I ended up in a BlueScreen. By the end of the day, I had successfully installed Windows 10 Pro V1511 (32 bit) and even set up the system to work. But I never really used the notebook practically, because its fan is constantly running at full speed and the body of the notebook gets 'too warm'.

For occasional tests the system is still good – and I had it updated to Windows 10 Anniversary Update (V1607) once. Later I switched to Windows 10 V1703 – but I didn't check during my last test, if it was really complete.

First of all, I will outline a few things that result from my experiments above. Yes, Microsoft is planning to upgrade Windows 10 systems to Windows 10 version 1903, which has been run out of support or its support will expire in November 2019. But the exciting question is: If I get a feature update, can I still choose when to install the feature update, and what else should I know?

Who is affected by this?

First of all, the forced update mechanism described below only applies to Windows 10 systems for consumer that are supplied with feature updates via Windows Update. In concrete terms, these are systems with Windows 10 Home and Windows 10 Pro, which work in private hands or in small companies. They are no longer supported 18 months after release and then do not receive updates anymore. 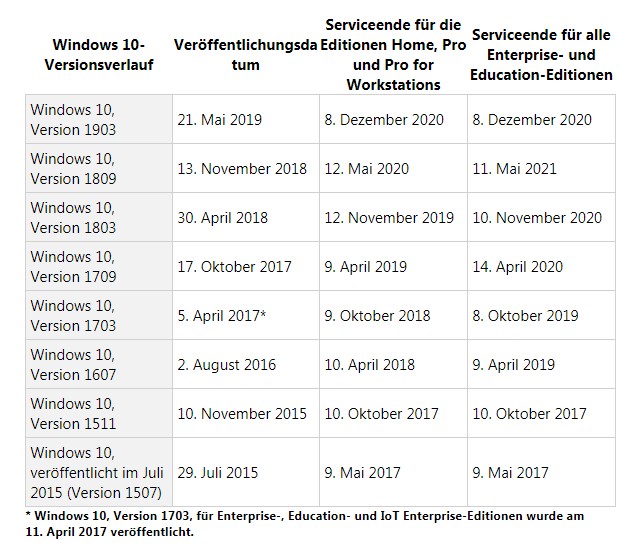 The table shown above gives an overview of the data and can be found on this Microsoft page. There you can see that all home user versions from Windows 10 up to version 1709 have already dropped out of support. Only version 1803 is still in support until November 2019.

All systems with Windows 10 Enterprise that are used in the corporate environment are treated completely different. There are two reasons for this:

I have re-read the original Microsoft quotes again in my article Windows 10 V1803 threatens a forced update as of July 2019. It confirms that everything refers to Windows 10 Home and Pro.

Whether Microsoft uses the AI-supported update distribution in the enterprise environment outlined below at all, is beyond my knowledge.

For Windows 10 up to version 1709, support for the home/pro variants has therefore expired as described above. Microsoft pushes the feature update to higher versions of Windows 10 on that machine via Windows Update – except the machine has known compatibility issues. 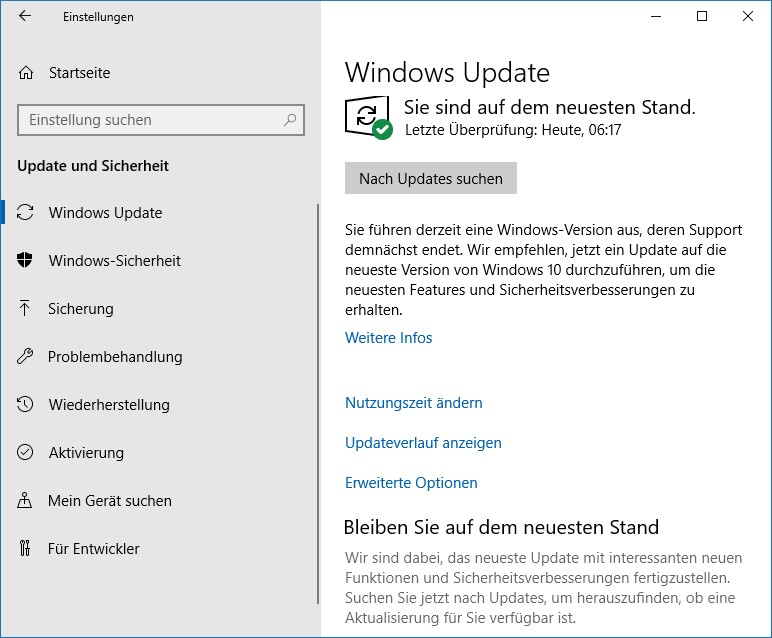 So there is no feature update available for my machine yet. Microsoft still has time until November 2019, before the machine is out of support..

While writing some German articles some other things around the rollout of Windows 10 version 1903 on older machines became obvious to me.

No upgrade for incompatible machines

If a Windows 10 machine is definitely known to be incompatible, Microsoft will use its machine learning (ML) based update distribution mechanism to lock the feature update. The user will then be shown the information about a problem already mentioned in Part 1 on the Windows Update page.

Interesting are also the machines that receive the above notification, that the feature update has been blocked due to compatibility issues. It'is interesting what Microsoft writes about their machine learning process (ML).

In other words, the ML model was only put into learning mode for the Windows 10 versions up to 1803 – it does not seem to refer to newer versions such as version 1809.

On the other hand, the training mode of the model has just begun. Therefore many machines, where it is not clear, if they are compatible for an upgrade to Windows 10 version 1903, probably are simply blocked from the rollout of the feature update. The rule-based model collects more data via telemetry and evaluates the configurations of individual Windows 10 machines that request updates.

If the machine learning (ML) model concludes that a machine is 'likely' compatible, it will (in my estimation) work with probabilities. These probabilities give an indication of how high the risk of issues is. Machines of a class with the lowest probability value for issues will receive the feature update.

Then individual machines of a device class without known compatibility issues are updated on a trial base. Telemetry data are then collected again for a few days to find out if there are any issues. During this time, the other machines seeking updates should not receive a feature update. Thus, the machine learning model slowly 'searches' its way along the rollout process.

This is actually a rather clever approach, since such models react very quickly to the telemetry data and can also stop or force a rollout for certain machine types. Microsoft had stated that they had already had good experiences with this approach (I think with version 1803). The rollout was faster than with earlier versions, where human decisions were made for the rollout.

Can I find out what is blocking?

Users keep asking if they can find out exactly what is blocking or preventing the feature update from being offered at all. Because users who receive the subsequent notification will only be directed to the Windows 10 status page via the Learn more button.

However, there are only general information about known upgrade blockers are provided. The user knows his machine is not compatible, but not why. About the question: "How do I find out more", two final thoughts.

.If no feature update is offered and update notifications blocked by group policies or registry hacks are excluded, and the update wizard doesn't say what's wrong, it becomes difficult. Because I postulate (I don't know exactly) that detailed information about why a feature update for a specific machine has been blocked can only be found in Microsoft's learning models.

This learning model makes the decision about a release dynamically by working through various rules. But that model is constantly changing due to the telemetry data from other machines. So it can be possible, that a manual upgrade using an an ISO file created with the Media Creation Tool will work flawless.

Perhaps the information and thoughts given above will help you to find your way around the complex topic of Windows 10 feature updates.