[German]For the weekend some new from Windows 10 May 2019 update (version 1903). Microsoft wants to speed up the rollout by machine learning, there are updated installation images and the list of show stoppers is still long.

Since a few days Windows 10 Version 1903 is available as an upgrade for all users who starts a search for updates via Windows Update. I wrote something about this in the blog post Windows 10 V1903: Available for 'Seekers' (June 2019). I've been alerted by Twitter that Microsoft is now using AI features for rollout.

Windows 10, version 1903 is available for any user who manually selects "Check for updates" via Windows Update for all devices that do not have a safeguard hold. If you are not offered the update, please check below for any known issues that may affect your device. The recommended servicing status is Semi-Annual Channel.

In the first paragraph it is again confirmed that the function update to version 1903 is now available during the update search. At the same time Microsoft announces that they have now started with the development and training of the machine learning process (ML). This enables the AI-supported rollout of the feature update on machines with Windows 10 April 2018 Update (Version 1803) and earlier. This is to ensure that Microsoft can continue to maintain these devices and provide them with the latest updates, security updates and improvements.

The colleagues from deskmodder.de noticed here that Microsoft has updated the Media Creation Tool (MCT). The installation images created by the MCT then have the patch status June 2019 and, according to deskmodder.de (I didn't check it), also contain the cumulative update KB4503293 of June 11, 2019.

I also quickly checked my MSDN download page with the MSDN subscription. There the ISO files of Windows 10 version 1903 with status 19 June 2019 are offered (see screenshot above). The Business Edition contains the SKUs shown in the following picture. 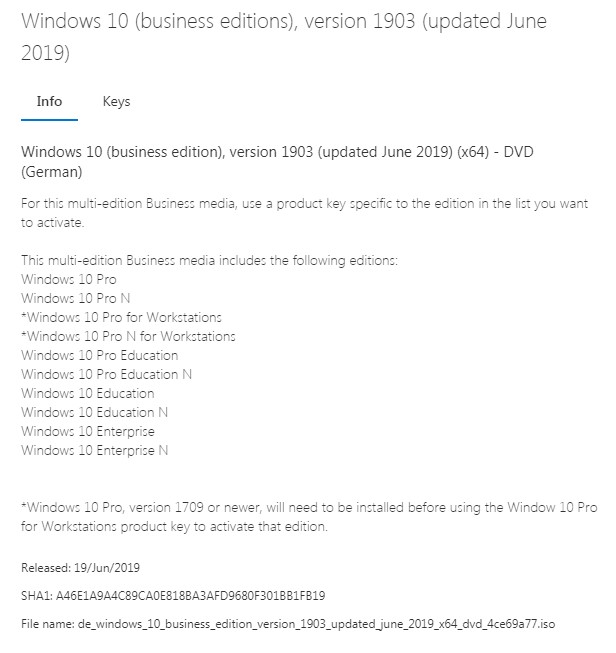 The consumer version of the MSDN-ISO of Windows 10 V1903 contains the following SKUs:

It would be interesting to ask to what extent the installation problem with USB media, which I had discussed in April in the blog post Windows 10 V1903: External USB storage as Upgrade blocker, is fixed. Microsoft writes on the status page that this is partially fixed with the June 2019 update. However, colleagues at deskmodder.de state that this problem has not yet been fixed. So you still have to either mount an ISO file under Windows 10 for an in-place upgrade, or burn a DVD for installation. A USB installation medium created with the Media Creation tool should cause problems.

A brief information, why Microsoft has released the new images. The deployment of apps via Intune didn't work (see here). The autopilot couldn't push APPs from the Company Portal onto the devices, so the deployment wasn't finished. OEMs can now use new images.

Tthe status page of Windows 10 Version 1903 describes known isues that prevent the upgrade or cause trouble after the upgrade. I had described most issues within my blog posts Windows 10 V1903: Known Issues – Part 1 and Part 2 (see links at end of article). On some items, such as the AMD drivers or duplicate profile folders, Microsoft states that this problem has been fixed. But most bugs have basically not been fixed since May 2019. Many entries have 'Mitigated', i.e. they have been patched to mitigate the bug. It is not fixed yet.

If you are interested in this topic, please browse through the status page of Windows 10 Version 1903, it's not really fun.

This entry was posted in Windows and tagged Update, Windows 10. Bookmark the permalink.