[German]Today still a tool introduction in form of the Open Source Task Manager TaskExplorer. The tool is developed by David Xanatos (an alias) for Windows.

David contacted me by mail a few day  ago and asked if I would like to introduce the tool. David wrote me the following:

Again I have a new tool to introduce, it is an Open Source Task Manager, called TaskExplorer. The tool is very similar to the old tool TaskInfo, but has much more functions, because it uses the KProcessHacker.sys driver.

The driver has a valid signature, so the tool can be used without any limitations, even if many AV products complain about the driver, ProcessHaker is a well-known Open Source Task Manager, a replica of sysinternals ProcessExplore. My TaskExplorer looks very similar to the tool TaskInfo, which is unfortunately closed source and has not been further developed since 2012. In contrast to the ProcessHacker, in which you have to open a new window for almost every additional info, in TaskExplorer everything is arranged in page tabs, so that you can get the maximum of information with as few clicks as possible. In addition, many of the information is updated in real time.

David states that the tool is now out of the pre-release phase and version 0.1 is ready for everyday use. A few things are still missing, but that will come in the next weeks. The tool is available in source code and as a ZIP archive on GitHub:

GitHub release there is also a description
Introduction on wilderssecurity.com

I have tested this tool in Windows 7 SP1 briefly. In the 64 bit version it didn't start and crashed. But the 32-bit version showed the following window. 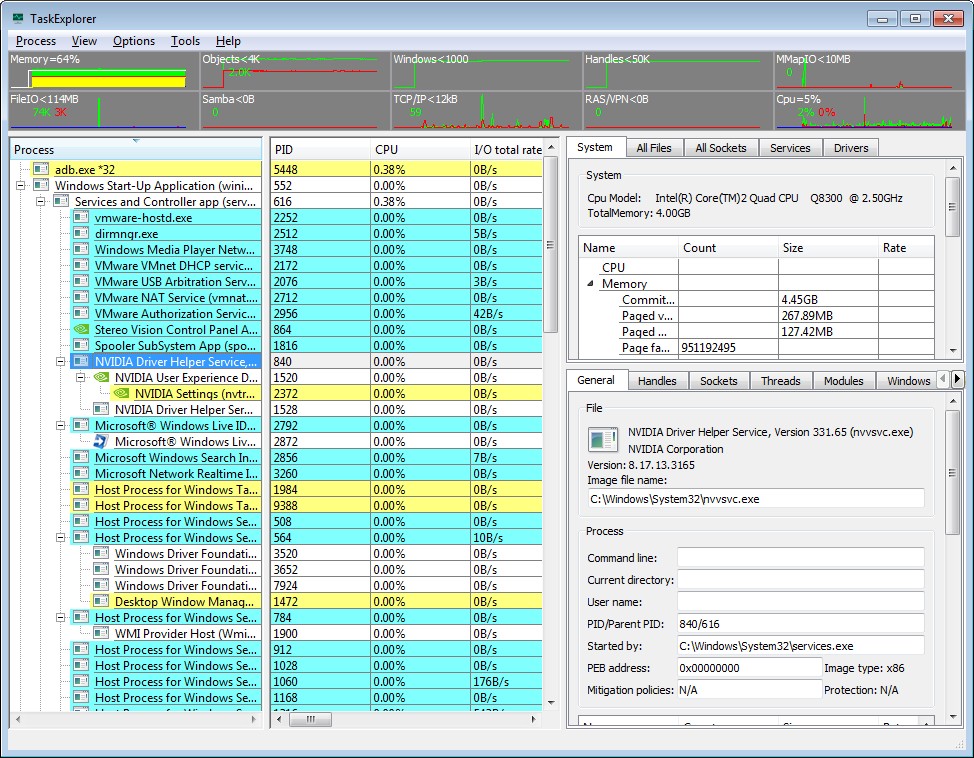 Looks like it can be used. David writes something about his motivation to write the tool. He used TaskInfo since 2003 on a daily base and doesn't want to miss it anymore. But the tool has, according to his statement, issues with Windows 10. It crashes on PC systems with more than 32 logical processors. David wrote:

Therefore I was forced to use ProcessHacker first, which was very cumbersome because of the very spartan UI. So I decided without further ado, because ProcessHacker is Open Source, with its backend TaskInfo, to build more than Open Source. It took me about a month of long weekends to do this, but now I use it instead of TaskInfo.

David wrote the UI for TaskExplorer with the platform independent Qt framework and made sure that everything was abstract when implementing the back-end interface. So that at some point somebody can simply implement on a unixoide backend, and the tool can also be used under Linux. Even if that will be a huge pile of work.

This entry was posted in Software, Windows and tagged Tool, Windows. Bookmark the permalink.