[German]Microsoft surprisingly released another update for the Windows 10 May 2019 Update (Version 1903) on September 12, 2019. However, this update is undocumented and very mysterious. Here is some information.  Addendum: Microsoft has released details about this update.

The information reached me via this German comment. But Microsoft hasn't documented anything about update KB4516421 yet, a KB article doesn't exist yet. I then checked my test machine and asked it to search for updates. The update was not offered there.

I have included then the machine into the Release Preview Ring, but I am not offered an update there either. In the Microsoft Update catalogue there is also no trace of this update to be seen. First I thought it could be another A/B test, which Microsoft runs with Windows Insiders. But a German blog reader wrote, that the Update has been offered via WSUS. And I got more feedback via e-mail, claiming the same WSUS matter.

Seaching the internet for Update KB4516421 brought me to this post within the tensforum. The update has been offered that user via Windows Update (see above screenshot). But the post didn't reveal more information either. My German tipster wrote here, that he found the file uac2formatreset.exe within the update package.

I did not find anything about this file name on the Internet. So following considerations are most speculative. We have audio issues in Windows 10 V1903 (see). There are USB Audio Class 2 devices and corresponding drivers to transfer audio signals via USB. Maybe Microsoft is experimenting with a fix for audio issues.

If I gain further insights, I will try to add them here.

My assumption above that the update had something to do with USB 2.0 audio issues was not that far-fetched. Microsoft published the support article for update KB451642 on September 13, 2019.

Update to address issues which may cause USB Audio 2.0 multi-channel microphones to fail

This non-security update includes quality improvements. Key changes include: Addresses an issue in which some customers may be unable to use USB Audio 2.0 multi-channel microphones in Voice Recorder and similar apps.

So the update fixes an issue with multichannel USB Audio 2.0 microphones or similar devices/apps. To install it, you must have the latest SSU installed. The update comes via Windows Update, via WSUS and is also available for download in the Microsoft Update Catalog.

During my quick tests this morning, I noticed something else. Yesterday I deactivated the web search and Cortana via group policies and deactivated Bing directly via registration entry on my test machine (I was experimenting with the Bing desktop search issue). When I started a search for new updates this morning (without being in the Insider program), the update client suddenly shows a nearly empty Update Settings window. 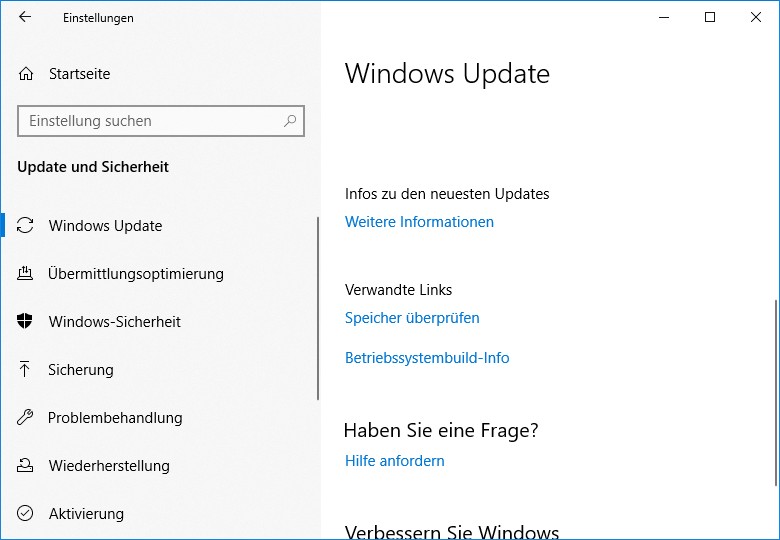 All options was suddenly gone. And I wasn't able to get it back refreshing the window. After I deleted the group policies again and updated the changes thing with:

the vanished options came back. I could check again for updates and the options to defer updates are remain within the window. Could be a coincidence, because the machine lags from time to time for half a second. I didn't test how reproducible this is, and if group policies matters. But that's strange – hence the question: Has anyone else stumbled across this phenomenon of the empty Windows Update page?