[German]Within this blog post I try to sort out some issues caused by the cumulative update KB4512941 for Windows 10 Version 1903. Addendum: Microsoft just confirmed the Cortana/Search issue.

I had already mentioned the broken desktop search and the high CPU load caused by Cortana in several articles (see links at the end of the article).

Microsoft says they are working on a resolution and estimate a solution will be available in mid-September. Here's an outline of what I've addidtionally noticed so far.

Since the release of Windows 10 version 1903, users have been struggling with issues around RDP connections (high CPU load, hanger, black screen). Microsoft's support article for the cumulative update KB4512941 for Windows 10 Version 1903 explicitly describes a fix for various RDP issues.

Since Windows 10 Version 1903, users of older graphics cards have suffered from the fact that RDP connections show a black window and do not work. In the blog post Windows 10 V1903: Remote Desktop shows Black Screen, I picked up the error and a user proposed a workaround using Group Policy (forcing the XDDM driver). This bug should be fixed with update  KB451294, – I have some positive feedback. But this comment has reached me about my Germany heise article.

Does anyone else have the issue with VMware?
If so, the connection still breaks as soon as I want to use RDP to connect to a machine running Windows 1903. The only remedy is to switch off the 3D function.

In Windows 10 version 1903 there is still a bad bug with RDP connections, which makes life difficult especially for people with VMs. The Desktop Manager (dwm.exe) causes a high CPU load and freezes VMs when trying to connect via RDP. I had described this in the blog post Windows 10 V1903: RDP (dwm.exe) causes high CPU load, freezes VMs (with a workaround). My hope that this bug has been fixed was not fulfilled. The comments here says that the problem is still present. On German site heise there is this comment thread, where even someone notices client crashes.

Is the Sandbox issue fixed?

Update KB451294 is supposed to make the Windows Sandbox work in a German Windows 10 Pro and to fix the bug described in the blog post Windows 10 V1903: Update KB4497936 breaks Sandbox. The Sandbox seems to be working it now, but I've seen single voices reporting isues. One user reports that as a developer he can't really test in the sandbox because nothing works. At heise you can find this German comment to my article about the update in the forum. There the sandbox eats a lot of CPU time and doesn't really work. A second comment at heise reports crashes of the sandbox – but can be isolated cases. Anyone else affected?

According to support article KB4512941 the issue, that Start menu tiles shows crytic titles like ms-resource:AppName/Text should be fixed

Updates an issue that may cause the name of an unsupported application to appear as default text, such as "ms-resource:AppName/Text" in the Start menu after upgrading the operating system.

The Microsoft Answers forum post here negates exactly this fix. The user still has the cryptic names in the start menu tiles of the apps. 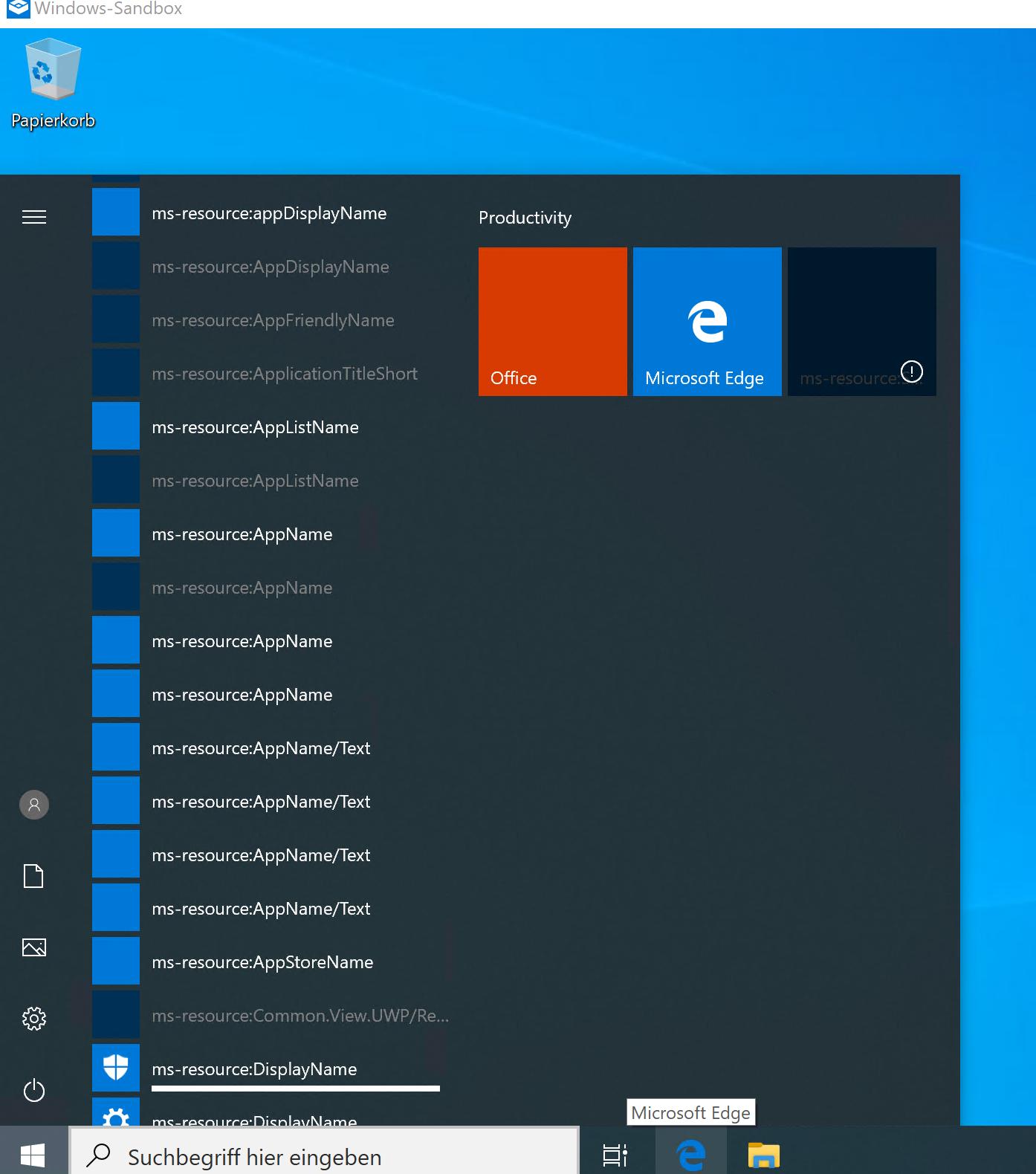 The above screenshot has been obtained from the Windows Sandbox, but shows the broken entries. My question: Anyone else who is affected by this bug?

Normally, logged-in users should be logged out when Windows 10 is restarted. This German comment at heise claims that this is no longer the case after installing the update KB451294. However, the user describes a fix via group policy. Currently, it is unclear what happened there. Question: Has anyone noticed anything similar?

Addendum: I got a feedback, that this behavior has been implemented since Windows 10 version 1809.

Display Bug in the Settings App

Within this Microsoft Answers forum thread a user describes a display issues that occurs due to the update. For example, details in the reset option in the advanced options of most apps are no longer displayed correctly. After uninstalling the updates, the display error is gone.

For applications such as games that rely on DirectX 12, users will observe jerking and stuttering. About this comment I came across the article here describing a workaround.

In connection with the update KB451294 I found some places on the internet that deal with BlueScreens and various error codes. Here is a short summary.

This post in Microsoft Answers Forum reports this error (but for the Preview version). The thread didn't shed light into the root cause. In the meantime I have this forum thread in the MS Answers forum, where the mistake happens in the final. Currently I can only recommend not to install the update (my German article Windows10: Update KB4056892 killt AMD-Systeme (Error 0x800f0845) does not help imho).

The BlueScreen was observed on a Lenovo Legion Y520 and is described here. According to Forenthread it may be based on an ArcSec.sys driver as part of various ArcSoft software such as TotalMedia Theatre. You can try uninstalling it here.

This installation error has come to my attention in various forum posts (including here and for the preview here). Then also a system file check with sfc /scannow fails. You can read the article Windows 10 V1903: Error 0x8024200D or 0x800F081F with update KB4512508 for further details. .

ome users get installation errors because they performed a cleanup after an update installation. Colleagues from deskmodder.de have described in this German article how to fix the issue.