[German]Users switching to the freshly released Google Chrome 79 browser may facing again the ‘AW Snap’ problem. The browser tabs are going into the “White Screen of Death” mode and displays the message “Aw, Snap! Something went wrong while displaying this webpage.” This is due to incompatible antivirus products or software tools that collide with Chrome’s Code Integrity protection.

It’s kind of a zombie. At the end of October 2019, the release of Google Chrome 78 crashed under Windows. Users who had Symantec Antivirus Endpoint Protection (SEP) installed experienced a nasty surprise. Symantec Antivirus crashed the Chrome browser’s browser tabs. The Microsoft Edge browser version 78, which is based on Chromium, also stopped displaying pages. 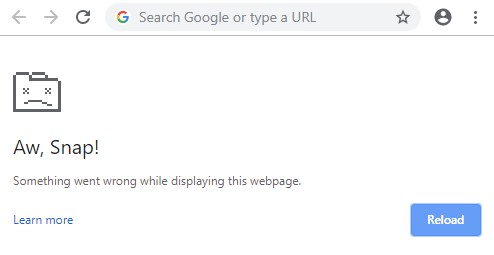 The “White Screen of Death” page visible in the picture above with “Aw, Snap!” was displayed, and the tab no longer works. I had reported in the blog post Symantec Antivirus crashes Google Chrome 78 about this effect.

The issue is back

On 10 December 2019, Google Chrome 79 was released (see Google Chrome 79 released). After release of the new browser version, some users are facing the “White Screen of Death” page with “Aw, Snap!” again. On Twitter there are the first references to this error.

So Google Chrome is borked for me, I can’t access anything without getting an aw snap page. Uninstalled. Try reinstalling tomorrow. #GoogleChrome #Google #TechSupport

The reason for the recurring issue is the Code Integrity protection in the browser that is active in Chrome 79. The colleagues at Bleeping Computer have taken this up in this article. Again, incompatible software is the root cause.

Google released this support page for Chrome 78 at the end of October 2019. It has now been updated for Chrome 79. There are hints on what to consider before upgrading to Chrome 79 (make sure antivirus products are up to date).

I haven’t tested, if the workarounds I mentioned in my blog post Symantec Antivirus crashes Google Chrome 78 (e.g. run Chrome 79 in compatibility mode for Windows 8) helps.

This entry was posted in browser, issue, Software and tagged Chrome, issue. Bookmark the permalink.