Extended Support for Windows Server 2008/R2 will expire on 14 January 2020. Customers will be able to switch to the Azure Cloud with the server in order to operate it there in a virtualised manner. Security updates are still available there until January 2023, and volume license customers also have the option of purchasing Extended Support. As far as I know, Microsoft will not offer individual ESU licenses such as those available for Windows 7 SP1. Within the Techcommunity article, the above picture was also included, showing the upgrade paths. According to this diagram, there is no in-place upgrade from Windows Server 2008 R2 to Windows Server 2012 R2. After I’ve published my post, I got the feedback from blog reader Karl that Microsoft’s article was incorrect. Quote:

So the Techcommunity article still suggests upgrading to Windows Server 2012, but there is no further explanation. This is quite a shot in the arm for an administrator. I received a private message telling me that the above Techcommunity article on upgrading Windows Server 2008 R2 was simply wrong and that the topic page had been going downhill for months – nobody feels responsible.

The details can be found in my blog post Windows Server 2008/R2: Microsoft explains In-place upgrade.

The article was updated in January 2020

Karl pointed out to me that the Microsoft Techcommunity article has now been revised. Thomas Maurer, a former MVP from Switzerland, has been an employee of Microsoft since 2019. Here is the info from Karl from January 6, 2020:

The problem is that the original wrong information was posted in July 2019 and I had several discussions on twitter about this with the corresponding relevant people at Microsoft.

At the time, and till today, the docs told a different story to former social media campaign and theme site.

As typical with social media it was picked up by bloggers and Windows news pages around the globe. Please always double check information :).
Now this is fixed nearly a half year later. 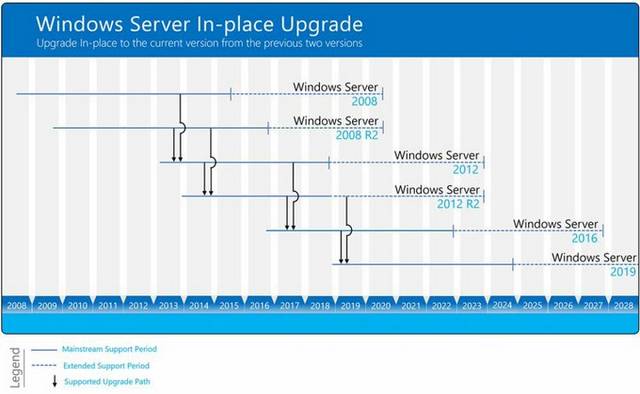 Compared to the original picture (see above), the upgrade path from Windows Server 2008 R2 to Windows Server 2012 R2 has been added. Maybe this will help some administrator working in this area. Thanks to Karl for the hint.

This entry was posted in Windows and tagged Upgrade, Windows Server. Bookmark the permalink.