[German]If you need a notification of low battery capacity on notebooks under Windows 10 version 1909, you should pay attention to the group policy settings. Otherwise, no more notifications will be sent.

I’m going to post another case about Windows 10 version 1909 here in the blog, which shows how you can fall on your stomach with group policies.

I stumbled the days on Twitter over the following tweet from @FuWissinger, which describes a problem there.

Bug with #Windows10 1909 and Power Management messaging? Low battery warning does not appear and computer turns off without any warning based on critical battery action. This does not happen on Windows 10 1809 with the same settings. Can you confirm this? @etguenni

He runs a notebook with Windows 10 November 2019 Update (Version 1909) and wants to be notified about low battery capacity. He has set the ‘Low Battery Notification’ option shown in the image above to On in the power options. Unfortunately, nothing happens in terms of notifications, the notebook simply goes off when the battery is low. Since the device with the Windows 10 October 2019 Update (version 1809) with the same settings shows a low battery warning, he thought it was a bug.

I don’t have the time for a test, but Daniel Ratliff has tried it on two devices. On a Dell Latitude 7370, the notification didn’t work. It’s probably another bug.

Kindly @FuWeissinger has found the cause and has complied with my request to inform me in case of success. The following tweet brings it to the point where the root cause is.

Seems the issue is with the GPO Settings which are handled differentially 1809/1909. Low battery notification level in GPO set to “not configured” now it works. Notification will only be shown if the “Low Battery Notification Action” policy setting is configured to “No Action”.

Hello Mr Born, I am happy to pass on the information. We set the energy settings via GPO Preferences. Obviously there is a difference between 1809 and 1909, if you additionally use Computer Configuration –> Admin. Templates > System > Power Management > Notification Settings Settings. 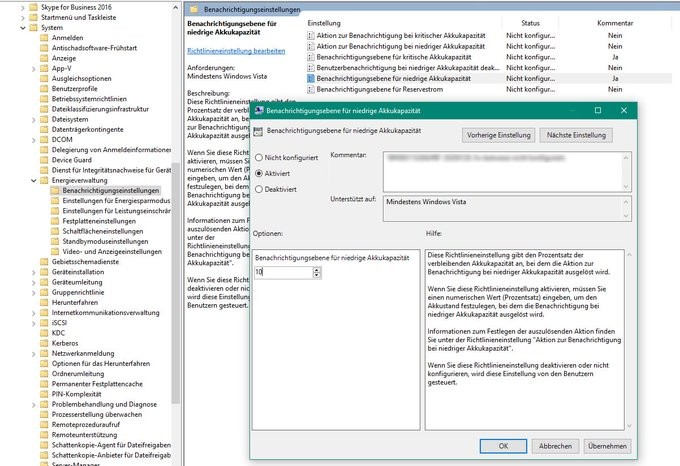 I set the GPOs back to “not configured” and left the GPO preferences. The first tests were positive, the message appears again. 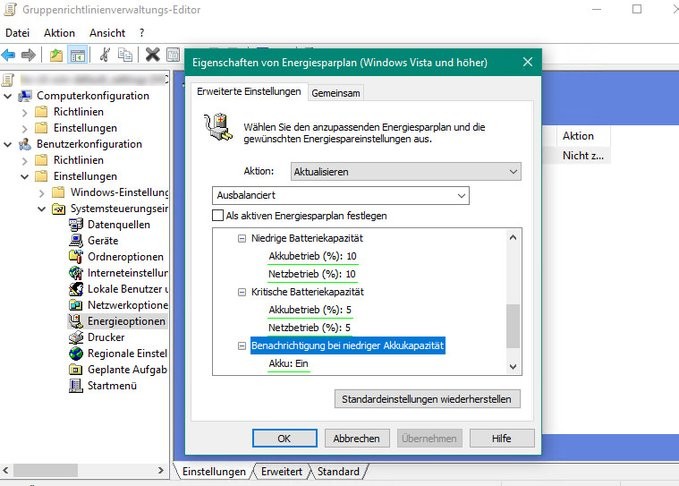 The above two screenshots (click to enlarge) show the respective settings that work. Maybe it helps someone.