[German]Some Windows 7 users (Addendum: and Windows 10) may be surprised to find that the operating system suddenly shuts down or restarts. The operation is rejected because of missing permissions (You do not have permission to shutdown this computer). Addendum: It seems to me, that an Adobe CC update from early Feb. 2020 (or for similar software) is causing this behavior. I’ve rewritten parts of the ‘Adobe service’ section, to make things a bit more clear. And there are signs, that Bitdefender Total Security 2020 may cause also this behavior – hope that helps.

I had already seen this the night at askwoody.com, but then I was asked by mail (thanks for that) and via Twitter from my German readers if I heard about that. It seems that many Windows 7 users are suddenly affected. First it has been posted at reddit.com here and here.

The affected users will receive an error message when trying to shut down or restart Windows 7.

You do not have permission to shutdown this computer

You don’t have permission to shutdown this computer- Windows 7

This error is preventing me to shutdown or restart my PC from yesterday ‍♂️‍♂️‍♂️ pic.twitter.com/JOXymOQYTI

Don’t have permission to shutdown

End of day I received a few calls with this error. Don’t see anything in event logs. After log off and reboot same issue. Doing a gpupdate in pc seemed to fix issue for now. Worried end of day Friday I may get a ton off calls

Has anyone else run into this?

If you search for this error on the Internet, there are many of hits – some of them from 2013 and earlier. So this is not a new bug – it’s just odd that it’s appearing right now. And it seems to have hit a number of Windows 7 users.

After I noticed the post at askwoody.com, I begun thinking, why the issue affects only a few users and only for Windows 7 SP1, and only from February 6, 2020? There hasn’t been a Windows update recently (Feb. 2020). The suspicion, that the fix for the black desktop background bug (see Windows 7: Update KB4539601 / KB4539602 fixes black Desktop) may be involved, wasn’t likely, because this patch has been released after we have had the first reports.

In MS Answers there is also the hint, that the crypt32.dll update (to close an information disclosure vulnerability) may be involved– and at askwoody.com this post also mentioned that. However, I consider this update to be less likely the cause (see my post at askwoody), as this update for the cryptography vulnerability has only been distributed to Windows 10 only (see this Microsoft document) – so it could not affect Windows 7.

The colleagues at Bleeping Computer and Catalin Cimpan at ZDnet have mentioned the issue (thanks for that) and posted workarounds (using gpedit.msc). While they write the workarounds in a good faith (at that time, not too much details has been known, users should avoid these steps and use it as a last resort. What all articles not mentions (even the copy cat posts): Tampering with gpedit.msc isn’t available for Windows 7 Home Edition – and the steps to change the UAC GPO described in all articles I found so far, will work only, if the user is a member of the administrator group (see also my Fix #2 below).

I then begun to search the internet for a reason, that caused this issue suddenly in Feb. 2020, and I found ‘a smoking gun’. Are you using Adobe Creative Cloud (CC) or do you have (or have had) other Adobe stuff installed on your machine? In this case, the following hint it hot for you. After investigation the case, I have read several times hints, that an Adobe service may be involved. Within this Microsoft Answers forum thread, there has been a hint from TimothyLevine:

In our case, it is definitely being caused by the “Adobe Genuine Monitor Service” that is part Adobe’s Creative Cloud. The exe that the service runs was is dated 2/3/20, so this is from a very recent update.

We’re telling users as a workaround to first logoff their computers then use the “power button” on the Windows 7 login screen to restart.

The interesting part ist, that the .exe used for this service seems to be updated on February 3, 2020 (I read the first posts on February 6, 2020). The advice given to the users in the 2nd paragraph is described below as the shutdown workaround outlined in Fix 3.

Also within this reddit thead user pinball5757 claims that Adobe uses a service ‘Adobe Genuine Monitor Service’ (part of the Adobe Creative Cloud, and probably of other Adobe software to check, if that Adobe stuff is genuine) that is causing the issues.

In my case, Adobe has a service called “Adobe Genuine Monitor Service”, and if I disable it, then restart, I can shut down like I used to from the “Shut Down” button in the Start menu.

(I was always able to shut down from the login screen after I log out of the accounts, all of which are admin accounts, and none of which would shut down without logging out first.)

The 2nd paragraph also mentioned the workaround outlined below in Fix 3. It’s also possible to stop and disable this Adobe service or change the start behavior, using the following steps.

2. Use the context menu Run as administrator and confirm the UAC prompt to launch the services manager.

3. Search for the service Adobe Genuine Monitor Service and try to change the service status (you can stop or disable the service or set it’s start option).

The most interesting part may be found in pinball5757’s reddit post, as cited below – he set the service to Automatic (Delayed Start):

EDIT: It seems, for me, if I log in with any account, before the service starts up, I can shut down from any other account so long as I don’t log out of the account I logged in with first. If I log out of all accounts, then log back in, I lose shut down permission, until restart with it set to Auto(delayed start). I reckon I’ll just disable it for a while, to see if any other issues arise. BTW my son uses Photoshop, and creative cloud with his class work so I may have more info if these start having problems for him.

2nd EDIT: As long as one of the accounts (3 on my machine) is logged in I can log in and out of the other two, and even log out of the first one, if I’m logged into one of the others, and I can shut down without issue, but if I log out of all three accounts, then log back in on any one of them, the Adobe service evidently gets, and locks the permission. I cannot get it back even if I stop the service.

3rd Edit: It turns out that if I do stop the service, log out of everything, then log back in with the service still stopped, I get permission back, without restarting the whole computer. “Adobe Genuine Monitor Service” is the culprit for me. Hope this helps.

So it’s sufficient to stop the service or set it to delayed start and log in, to gain the right back to shutdown Windows 7. Disabling the service may be a bad idea – from what I read, the service is used from Adobe to check, whether Adobe products installed are genuine.

Addendum 1: After writing this article, I found this comments at Bleeping Computer. It proves my theory, that the Adobe Service is causing the culprit.

Addenum 2: See also the comment from Julia below, pointing out a 3rd place in MS Answers, where a user affected confirms the Adobe CC service as a root cause.

Addendum 3: Bleeping Computer mentions in the (now) updated article also “Adobe Genuine Software Integrity Service”, and “Adobe Update”, but I’m not sure, whether both services need to be disabled.

Addendum 4: And I have had some feedback on Twitter, that Adobe CC has been installed on affected systems.

It that helps, feel free to drop a comment – and you should contact Adobe claiming for an update of their software. I’ve also informed Microsoft’s WindowsSupport and MicrosoftHelps via twitter about the above findings.

Addendum 5: At Bleeping Computer this user claims, that BitDefender Total Security 2020 is causing this symptoms. An update has been pushed at Feb. 6, 2020, that may cause this issue. Somebody can confirm that?

Other Workarounds and Fixes

If the hints, given above, didn’t work, or if tampering with Adobe Genuine Monitor Service is having side effects, here are a few hints, what you can do else, if you are affected. But note: Use it as a last resort.

In case the ‘Adobe thing’ didn’t fit, the next thing you could check, are group policy settings. Under Windows 7 Pro, Ultimate and Enterprise, you should try the following steps:

1. Type the command ggpedit.msc  in the search box of the Start menu and then start the Group Policy Editor via the the Start menu entry shown using the context menu command Run as administrator and confirm the execution using User Account Control.

Afterwards, an administrative command prompt window can be invoked. Enter the command gpupdate /force to force the adoption of the policy change (since a restart is not possible). The above approach is described in a similar form in this article, at Bleeping Computer, and is referenced on reddit.com.

For users of Windows 7 Home and Starter, you can use the registry editor to make adjustments. The key is:

Set the DWORD value EnableLUA to 1. This is described here.

There are users, see here, who specify to press the key combination Ctrl+Alt+Del. In the Lock Computer page that appears, there is a button in the lower right corner to shut down Windows 7. Try that to see if that still works. 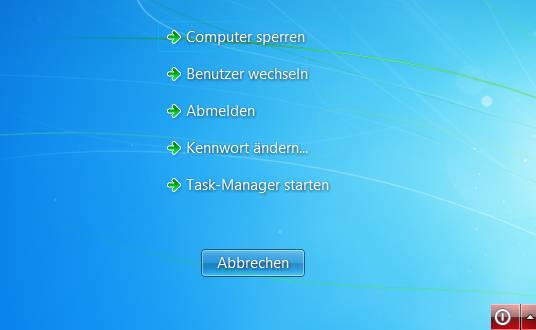 The colleagues at Bleeping Computer have mentioned another workaround here in the form of deleting accounts and profiles. The same can be found from Catalin Cimpan at ZDnet. But I guess that the above mentioned Adobe service is the bad guy. Any of you affected who can tell us more?

Addendum: I received in the meantime a feedback at Twitter, showing, that Windows 10 is also affected.

This entry was posted in issue, Windows and tagged issue, Shutdown, Windows 7. Bookmark the permalink.