[German]German blog-reader Martin Feuerstein has pointed out a curious issue with app installing in Windows. When trying to install an app in Windows 10, he got the error message ‘The app you’re trying to install isn’t a verified app from the Store’. Here is some information about this issue.

Martin writes that on Windows 10 he received a warning when he tried to download and install an app (in his case it was Spotify). But Martin is not alone – while writing this post I came across this Microsoft Answers forum post with a similar problem (there is was TurboTax 2019).

The situation, Martin suddenly faced: He downloaded the Spotify exe installer from spotify.com. Then he installed the app und got later on one system the warning ‘The app you’re trying to install isn’t a verified app from the Store’ every time a user logged on and tried to launch the program. The screenshot shown below is from this Microsoft Answers forum post. 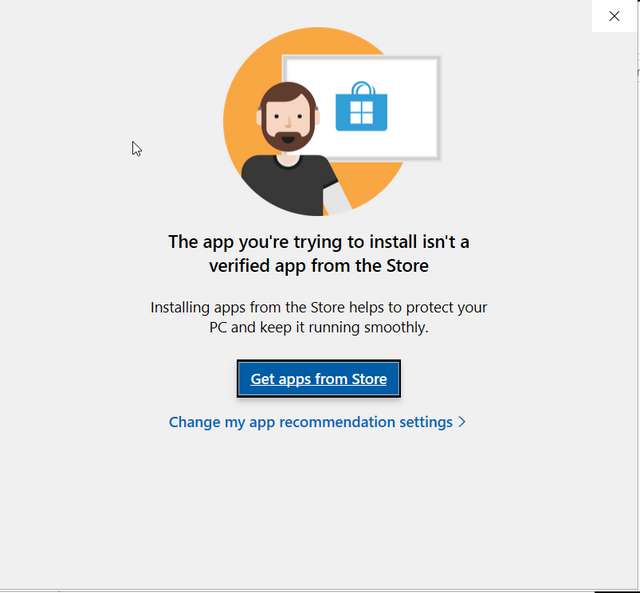 The application could not be installed. The whole thing is crude, of course, since it is an official Spotify app. Martin included some information about the environment in his mail.

Martin wrote me: When I first installed the computer, Spotify was downloaded and installed with the Microsoft Edge (without warning). Afterwards Spotify was moved from Appdata to a directory directly in c:\, so that another user account can also call the program.

That’s when the problems started. As soon as Spotify has been started for the first time from the respective user account, the above message appears at every Windows logon. This is true even if Spotify is not in autostart or has even been deleted from the hard disk. You can get grey hairs there.

Martin did some research and writes about it: “We believe the problem is related to the Internet zone flag or zone identifier on a executable”. This flag is set when files are downloaded from the Internet. The state of this flag can be set in the properties of an executable file on the General tab via the Security/Allow option. Below is the German version of the property box – a similar description in English may be found here.

Because Martin was able to bypass the problem in the second attempt by deleting the Internet zone flag in question. However, as Martin wrote, the whole thing was a ‘long journey’ until it worked.

When he checked the program files, the Internet flag was no longer set. The program started afterwards without the error message shown above. It is an old experience that you should reset the Internet zone bit on downloaded files before installation to avoid issues.

At this point I would like to thank Martin Feuerstein for his feedback. Maybe it will help someone who is affected.

Note: There is this MS Answers forum post, suggesting to got to the Settings app, navigate to ‘Apps & features’ and choose the App install option ‘Anywhere’. But I guess, that won’t help, because the Apps mentioned above are not from the store. By the was, I found mentions since spring 2020 – so it could be a bug.